Muhtadi’s on a Mission
Votes 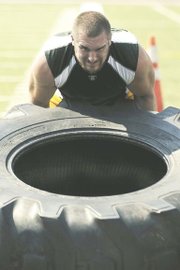 Former T.C. Williams football player Dean Muhtadi begins the next step in his pursuit of the NFL this Saturday when he starts training camp with the Green Bay Packers.

Muhtadi (left) and his cousin, Laith Wallschleger (right), go helmet-to-helmet during a recent training session. Along with trainer B.J. Kethcum, Muhtadi has been working out with Wallschleger in Alexandria this past month in anticipation of his arrival at Green Bay Packers training camp this weekend. 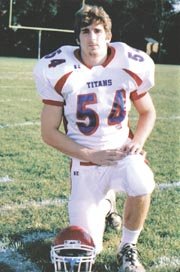 Muhtadi played on the T.C. Williams varsity football team (2000-2004) for all four years of high school, but won just four games over that time.

Muhtadi records a sack during a game against Clemson this past fall.

The temperature had reached 90 degrees last Saturday afternoon, but the humidity and heat coming from the field turf at T.C. Williams High School made it feel at least 10-15 degrees warmer. In between grunts stood smiling, 295-pound former Titan football player, Dean Muhtadi, throwing an eight-pound medicine ball as hard as he could at his cousin, rising St. Stephen’s/St. Agnes senior Laith Wallschleger.

“We always go to weather.com and try to find out the hottest time to work out,” said Muhtadi, before hurling the weighted ball over his head more than 30 yards.

This, more so than the football fields at the University of Maryland where he played as a defensive lineman the past two falls or the bright lights of the NFL Draft, represents the culmination of Muhtadi’s unlikely journey from high school afterthought to legitimate NFL prospect.

On Saturday, Muhtadi will begin the next chapter of that quest when he takes part in his first-ever NFL training camp in Green Bay, Wis., with famed Lambeau Field as the backdrop. In May, he beat the odds by becoming one of just two undrafted free agents (the team cut 23 others) to make the Packers’ training camp roster.

But Muhtadi, born and raised down the street from St. Stephen’s/St. Agnes, never would have reached this point without both the help and challenges presented by growing up in Alexandria.

“This community has been so great. In order for me to get picked up, it really took every corner of Alexandria working for me,” said Muhtadi last week. “But coming out of T.C. … nobody knew about me.”

&lt;b&gt;MUHTADI IS AWARE&lt;/b&gt; of the irony, back home in Alexandria training to make the team that is home to some of pro football’s most iconic figures, considering his four years of T.C. Williams football included just four wins.

And though Muhtadi got pulled up to the varsity as a freshman in 2000 and was second in the Patriot District in sacks as a senior in 2004, he languished a bit under the constant upheaval within the program. During his four years, Muhtadi had four coaches, and just one who stayed more than a season.

Recently, though, he has returned to his old stomping grounds, eschewing the training facilities in College Park, Md., in favor of some home cooking with his family. Almost every day for the past month, Muhtadi, his longtime trainer B.J. Ketchum, and Wallschleger have taken to the football field at either T.C. Williams or St. Stephen’s/St. Agnes, working on strength, conditioning, and anything else Muhtadi might need come this weekend when he’s going up against some of the best football players on the planet.

Wallschleger, in particular, has been at his cousin’s beck and call all summer long. He grew up going to Muhtadi’s games at T.C. Williams and later at Division-III Christopher Newport University and Maryland. Now, as Ketchum explains it, he’s “Dean’s dummy.”

“He has been known to call me at one in the morning to go over film or lift,” said the 220-pound Wallschleger, a tight end and defensive lineman on the St. Stephen’s/St. Agnes football team. “I just drop everything. Not too many guys get to work with an NFL player, so I’m very fortunate.”

&lt;b&gt;ON THIS DAY&lt;/b&gt;, a week before training camp starts, Muhtadi and Wallschleger are in the middle of what they deem a light workout, but the soaring temperatures have both covered in sweat before their warm up is over. The two move onto medicine ball exercises, hurling the ball as far as they can, with Ketchum ensuring they maintain proper hip position to simulate the explosion necessary for a lineman to come out of his stance once the ball is snapped.

From there, the group does football drills. Ketchum is the imaginary quarterback, while Muhtadi and Wallschleger alternate taking reps as defensive lineman against one another. Only when Muhtadi deems his and Wallschleger’s performances chasing down Kethcum adequate do they saddle over to 400-pound tires lying along the track.

After another 20 minutes of 30-yard sets flipping those oversized tires, the group — now joined by Robert Asmar, a former teammate of Wallschleger who is playing for William & Mary’s football team this fall — begin another round of football drills. This time, though, Muhtadi straps on his old Maryland helmet, while Wallschleger puts the red, winged helmet of SSSAS and a set of pads to simulate double teaming Muhtadi at the line of scrimmage.

Within minutes, Muhtadi had ripped both of his cousin’s shoulder pads — the second day in a row he has done that. The loser of these line play exercises usually has to buy lunch.

Supervising all of this is Ketchum, a teacher at MacArthur Elementary School and the throwing coach for the T.C. Williams track and field program. He and Muhtadi met at T.C. Williams when Ketchum was trying to persuade him to try out the shot put.

The two didn’t start working together until the spring of Muhtadi’s senior year of high school, when Ketchum saw Muhtadi running laps around the track in preparation for playing college football at Division-III Christopher Newport. The two friends have continued their relationship through Muhtadi’s transfer to Maryland and now that he’s on the cusp of making an NFL roster.

“He’s like a little brother to me … a bigger little brother,” said Ketchum. “He has come from nothing. He’s constantly had to fight to prove people wrong, but he has embraced that.”

&lt;b&gt;COMING OUT OF T.C.&lt;/b&gt; Williams, Muhtadi had no interest from Division-I programs and of the Division-III programs recruiting him, Muhtadi had only heard of one: Christopher Newport University in the Hampton Roads area of Virginia.

Rather than sulk about his lack of notoriety, Muhtadi, who had been SGA president in high school and started the Titan Pride spirit club, embraced the slight. In two years at Christopher Newport, he became a member of the school President’s leadership program, the honors program, the executive board of the business school, the student exchange program, and by his sophomore season, was named captain of the football team. Still, he longed for more.

“I felt like everything was falling into place, it was the hardest decision to leave,” said Muhtadi. “I just wanted to play Division-I ball so bad.”

He transferred to Maryland as a walk on in time for the 2006 college football season. He sat out that year due to NCAA transfer rules. Quickly, though, Muhtadi made an impression on coaches. He saw action in six games as a redshirt junior in 2007 and earned an award for having the highest GPA on the team.

As a senior this past fall playing mostly defensive tackle, he played in all 13 games, finishing tied for third on the team in sacks (2.5), earning Academic All-ACC honors and the recognition of having the highest GPA of any senior on the squad. He also became something of a folk legend last September, when a motivational speech (or scream, depending on whom one asks) before Maryland’s game against California propelled the Terrapins to a 35-27 victory that many on the team pointed to as the turning point of the season.

&lt;b&gt;BUT MUHTADI’S PASSION&lt;/b&gt; as it relates to football is quite unique. He loves to play the sport, but unlike the millions of Americans who watch football games in stadiums or on television every fall, he’s not a fan.

“If you asked me the starting lineup for any other team, except some of the big name players, I probably wouldn’t be able to tell you,” said Muhtadi. That hasn’t deterred his work ethic, though.

“He literally doesn’t stop,” said Wallschleger. “Every day he’s doing something to get better.”

In recent weeks, he has been studying the Packers media guide as if it were a textbook, gleaning pertinent information about legendary figures like Vince Lombardi and Bart Starr. When he’s not reading, Muhtadi is training.

He knows he can’t control what the Green Bay coaches think about him, but he can dictate the type of physical condition he is in when he gets there. On top of the daily workouts with Ketchum and Wallshleger, his girlfriend is a trainer at the Crossfit Old Town, so Muhtadi has been allowed to work out when he wants to. If he’s not there, it usually means he’s lifting with older brother Casey at a nearby Gold’s Gym. He has weekly appointments at the chiropractic offices of Dr. Heath Bills or with local acupuncturist Marie Steinmetz.

He’s also spoken to several high schools around the area during his month back in Northern Virginia. Already he has visited with the football teams of T.C. Williams, McLean, Wakefield, and St. Stephen’s/St. Agnes to share his underdog story, one that sounds familiar for a lot of local athletes that feel overlooked.

“He’s just a freak of nature, but you don’t get to this level just on talent,” said Ketchum, citing Muhtadi’s 36 1/2-inch vertical leap and “grinding” workout style. “He’s always gonna remember the people who helped him out. I think he takes genuine pride in that.”

&lt;b&gt;EIGHTY PLAYERS&lt;/b&gt; will show up to Packers training camp this weekend, many of whom already have spots guaranteed. NFL teams must trim their rosters to 53 by the end of August, with five others eligible for the practice squad.

Muhtadi just hopes he’s one of them, even if he’s made some assurances just in case. He’s still in the midst of finishing up his MBA at Maryland and has been offered several financial services jobs of late. His chances of making Green Bay’s final roster are good, not great. Muhtadi’s best shot is on special teams or as a member of the practice squad, although the Packers drafted a player similar to him, Boston College’s B.J. Raji, in the first round of the 2009 NFL draft.

It’s a good thing Muhtadi is used to long odds by now.

“I don’t want to say it was luck, but it’s tough to get picked up,” said Muhtadi. “A lot of guys go unnoticed and I’ve always been one who has slipped through the cracks. This is the opportunity of a lifetime and I’ll be damned if I don’t give it everything I have.”