Longtime executive director one of several lauded from soccer community. 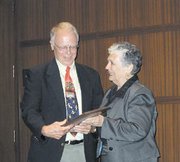 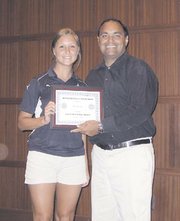 The Arlington Soccer Association held its annual awards banquet on Wednesday night June 10, 2009 at the NRECA Conference Center in Ballston. More than 150 attended the celebration honoring the myriad of volunteers and staff that help put the over 5,000 ASA players on the field each season. The night’s main event was the celebration of two longtime ASA staff who are retiring, referee coordinator Harvey Snyder and longtime ASA executive director, Mac McLaughlin. This was the first ASA Awards Banquet held since 1999.

Guest speaker Brian Wiese, the head men’s soccer coach at Georgetown University, kicked off the night’s main activities. The night’s first awards were presented to the ASA recreational club’s volunteers of the year. Each club also presented a sportsmanship team of the year award, which was renamed the Mac McLaughlin Sportsmanship Team Award. ASA named Justin Wilt its Rec Club Manager of the Year. Bryan Namoff of DC United presented Justin with his award.

ASA also honored two youth referees of the year, Lukas Eigler-Harding and Adrianna Gorsky, both Washington-Lee High School students. Arlington Travel Soccer Club (ATSC) presented its Volunteer of the Year award to Diana Greenhalgh. The ATSC boys’ coach of the year was Keith Moser, longtime Marymount University head coach. Wiese presented the award to Coach Moser. The girls’ Coach of the Year was Tom Torres, who has coached in ATSC for 15 years and is also the head boys’ soccer coach at Westfield High School. Sarah Senty, former ASA player and current member of the Washington Freedom, presented Torres with his award.

The evening continued with Harvey Snyder earning the ASA Special Recognition Award. The Special Recognition Award has been given just four times, when the association feels an individual or group has done something above and beyond the call of duty for the betterment of the association and community. Snyder became a licensed United States Soccer Federation (USSF) referee in 1980, and became the ASA Referee Coordinator in 1996. Despite stepping down from that position, Harvey will continue to teach USSF certification courses.

&lt;b&gt;THE FINAL AWARDS&lt;/b&gt; of the night went to McLaughlin who served in the Marine Corps for 20 years and retired from service in 1970. After working in a number of volunteer capacities with ASA while in the corporate world, McLaughlin was hired as the organization’s executive director and oversaw the progression of ASA from a program of 800 players to more than 5,000 in 2009. He developed, implemented, and managed all operational and administrative policies and procedures, many of which were instituted by numerous other soccer organizations in Northern Virginia.

The first honor McLaughlin received was induction into the ASA’s Hall of Fame. Each year the individual whose contributions to soccer in Arlington warrant special praise is inducted into the Hall of Fame. These individuals have demonstrated special interest in soccer and have contributed in a significant manner to its principles of fair play, sportsmanship and popularity. Former ASA Soccer Person of the Year and current ASA board member and treasurer George Towner presented McLaughlin with this award.

Finally, McLaughlin was presented with ASA’s Soccer Person of the Year. The most prestigious award from the Arlington Soccer Association is designed to recognize the individual who has made the most significant contribution to the sport over several years. Special consideration has been given to the effect the individual has made to the growth, sportsmanship and popularity of soccer in Arlington. New Executive Director Matt Baehr presented McLaughlin with this award, a poster signed by many of the ASA players McLaughlin impacted over the years.

Earlier this year, McLaughlin was awarded the Adele Dolansky Exemplary Service Award by the Virginia Youth Soccer Association, its highest honor in recognition of exemplary service to the soccer playing youth of the Commonwealth of Virginia and the District of Columbia. Last month, McLaughlin was also given the Better Sports Club of Arlington’s highest award, Arlington’s Sportsman of the Year. McLaughlin is currently the youth sports supervisor for the city of Alexandria Department of Parks, Recreation, and Cultural Activities.