Motivated Zouaimia wins boys’ 1000; Chantilly, Westfield have highlight moments as well on both boys’ and girls’ side.

In a photo finish, Chantilly's Mohamed Labor-Koroma (right) crosses the finish line just ahead of Centreville's Yazid Zouaimia in the boys' 4x800 relay race at last Saturday's Northern Region track and field championships at George Mason University. The Chargers' championship relay foursome was made up of Matt Cumpian, Eric Rolfe, Chris Foley and Labor-Koroma. For more results on the region meet, go to Centre View North Sports at connectionnewspapers.com. 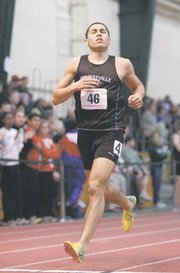 Centreville, which two weeks ago put together a stellar showing at districts to earn a first place tie with Robinson, accumulated 36 team points at regionals to garner fifth place, tied with Hayfield. The team champion was South Lakes High (72), which successfully defended last year’s region crown. The Seahawks finished ahead of second place Langley (54), third place Fairfax (37) and fourth place Lake Braddock (36.5). Rounding out the top 10 behind Centreville and Hayfield were Edison and Robinson, which tied in seventh with 34 points , followed by ninth place Chantilly (33) and 10th place Annandale (28).

One of the best events of the day came in the boys’ 4x800 relay. The relay race winner was Chantilly, whose final leg runner Mohamed Labor-Koroma barely crossed the finish line ahead of Centreville’s Yazid Zouaimia.

A little while later following the dramatic 4x800, Centreville’s Zouaimia, frustrated by the close second place relay finish and highly motivated to excel in his next event, won first place in the 1,000-meters race. The senior Wildcat, in perhaps Centreville’s highlight moment of the day, finished ahead of second place Ahmed Bile of Annandale and third place Foley.

“Yazid was very fired up after the boy's relay lost by 15-hundreths of a second,” said Kelley Devlin, a Centreville track assistant. “It was so darn close. He gave his anchor leg everything he had, running a fast and gutsy 1:55 leg, to try to get the championship. So he was very disappointed after that defeat and was not going to settle for less than a win in the 1000.”

And Zouaimia indeed got it, running a terrific 1000.

“He ran a very smart, strong and competitive race, sitting on the leaders for the first couple of laps,” said Devlin. “With 400 meters to go, he surged to take the lead where he wasn't challenged the rest of the race, running a 2:34.25 - his personal best and enough to get him the regional title! His outstanding season continues and all of his hard work and dedication is paying off.”

Zouaimia was not scheduled to run the 1000 event at states, but was instead gearing to take part in the 3200 race as well as anchoring the 4x800 relay. At nationals in a few weeks, Zouaimia will race in the 1600 event.

While Centreville did not have any other first place event winners at regionals besides Zouaimia’s victory in the 1000, the Wildcats did have several other solid outings and place finishes. The Centreville 4x400 relay team finished third place, behind first place South Lakes and second place T.C. Williams. The Wildcats’ foursome was made up of junior Austin Erickson, senior Chris Mbaidande, senior Terrance Kennedy and senior Paul Barbour. Madison High finished fourth in the relay and West Potomac was fifth.

Centreville’s Kennedy took fourth place in the boys’ high jump event. The Chargers’ Labor-Koroma was right behind him at fifth place. Kennedy also earned an eighth place finish in the shot put event. And in the long jump event, Centreville’s Barbour earned a stellar fifth place finish. Barbour was also seventh in the triple jump.

Other local boys to earn top eight finishes at regionals were: Labor-Koroma (8th in the 300 dash), Chantilly freshmen Sean McGorty (8th in the 3200), and Chantilly sophomore’s Andrew McDuffy (8th in long jump).

&lt;b&gt;ON THE GIRLS’ SIDE&lt;/b&gt; at regionals, Westfield, Chantilly and Centreville finished seventh, 12th and 16th, respectively, among 26 total teams. Westfield actually finished in a tie for seventh with West Potomac, and Chantilly tied for 12th with Mount Vernon.

Grochowski fared even better in the 1600, garnering a fourth place finish.

In the high jump, Chantilly senior Olabisi Abisogun was seventh.