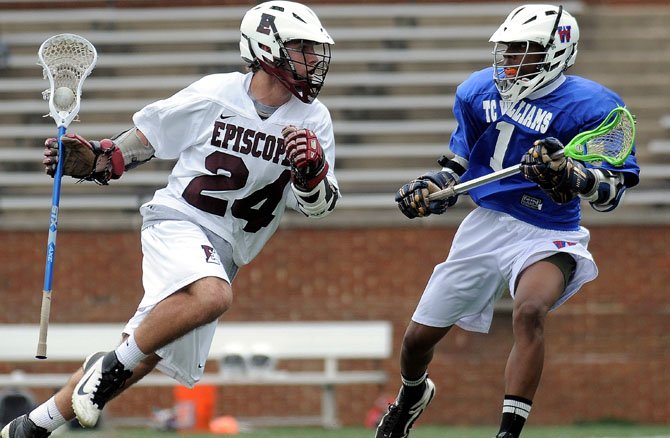 Alexandria — Episcopal attackman Brooks Davy managed to attempt a shot while falling to the turf against T.C. Williams at the Hummel Bowl. The freshman whipped the ball from the left side of the field past the Titans keeper, putting the finishing touches on a dominant effort by the Maroon.

In an Alexandria public-private school matchup, public school T.C. Williams was no match for Episcopal, which built a 9-0 lead and cruised to a 16-2 victory on March 31. While the contest wasn’t competitive, each team benefitted from the experience. On one side, Episcopal reserves received playing time, helping build depth and experience for the future.

"We don’t have a lot of games where we can get leads like this and get the opportunity to play everybody," Episcopal head coach Scott Conklin said. "That’s an important part of it is getting everyone in. I told the team in the huddle after the game that this was the best that our second group has looked all season, so I was proud of that."

"That’s good for him confidence-wise," Conklin said. "Right now he’s probably our fourth attackman, so if someone gets injured, he’s going to have to step in and play, so that’s where a game like this gives him a little bit of confidence that he knows he can get out there and do it."

On the other side, the T.C. Williams defense got to test itself against one of the better opponents it will face this season.

"So far on our schedule, and possibly for our season, they move the ball better than anyone else we’ve played," TC head coach Mike Mulherin said. "They have a very senior team. They had great accuracy, consistently, and their ability with speed to move the ball on offense was good experience for our defensemen. Really, we wanted to see how our defense matched up on their offense and it gave us an experience where we had to make two, three slides instead of just one."

"We don’t have a lot of games where we can get leads like this and get the opportunity to play everybody. That’s an important part of it is getting everyone in. I told the team in the huddle after the game that this was the best that our second group has looked all season, so I was proud of that."

Episcopal took control early, outscoring TC 8-0 in the opening quarter. Senior attackman Armour Shaw scored the Maroon’s first two goals and was one of nine Episcopal players to score at least once.

"The past week and a half, he’s played pretty well," Conklin said about Shaw. "… He’s taken on a little bit more of a leadership role and I thought he played well today. He has to be a finisher for us, and he does well on a lot of little things, too — he picks up tough ground balls, he settles the offense when we need him to."

"It’s exciting," Shaw said, "to get everyone involved and everyone a chance to play."

Michael McGonagle scored both goals for T.C. Williams, which was without two of its primary attackmen. Ed Kargbo missed the game with an injury and August Bryant was on a family vacation.

"Nobody likes to lose," Mulherin said. "You try to convince these guys that wins and losses aren’t what we need to focus on and it’s just getting better and building our skill, [which] is always a challenge … and they really have showed they’re focused on getting better and they understand that the record is not something to concentrate on."

"I’m just really glad that we’re able to maintain this game because I think it’s great for Alexandria," Mulherin said. "I really appreciate Coach Conklin and Episcopal being such great hosts as well as having such a class program to play us and serve as a good experience for us."