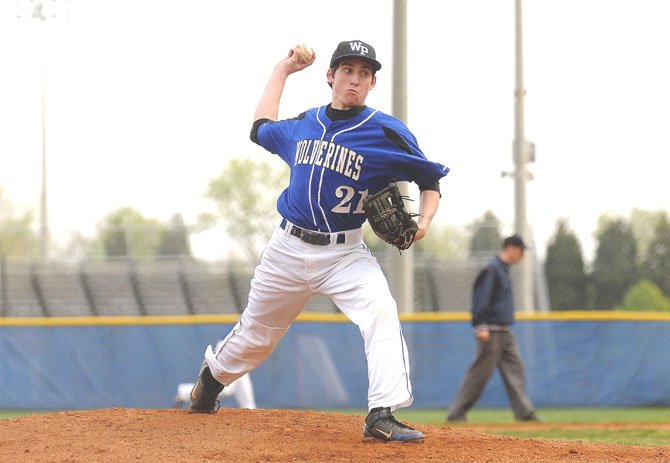 Mount Vernon — West Potomac senior Josh Belanger focused on the basics prior to his first start on the mound this season, but that didn’t stop his teammates from playfully encouraging the right-hander to put forth a memorable performance.

"We kind of joked about throwing a no-hitter before the game," Belanger said. "I didn’t really have any expectations. [I just wanted] to come out and do well, throw strikes [and] get the win."

As it turned out, Belanger didn’t need expectations, first-pitch strikes or a consistent breaking ball to give his fellow Wolverines the career-best effort they were looking for.

Belanger threw a five-inning no-hitter against Falls Church on March 31 as the Wolverines cruised to a 17-0 victory during the opening round of the Alexandria spring break tournament at West Potomac High School. The Wolverines went on to beat George Mason 14-4 in the semifinals on April 2 and defeated Woodson 11-3 for the tournament championship on April 3.

Belanger’s first no-hitter wasn’t pretty at times. No. 21 often fell behind, throwing a first-pitch strike to just five of 18 batters, but he found ways to get outs. He struck out five Jaguars and had a hand in four put outs, including catching a screaming line drive hit directly at him.

"I had trouble throwing first-pitch strikes, but I was able to battle back and get ahead," Belanger said. "I didn’t really have any offspeed pitches. I was just really working the fastball. I had good location — I kept it down."

Belanger, whose primary position is shortstop, threw 38 of 62 pitches for strikes. He walked one, hit a batter and allowed two Jaguars to reach third base. Falls Church had a runner on third with one out in the fifth, but Belanger struck out the last two batters of the game.

"I was surprised he was as sharp as he was, honestly," West Potomac head coach Jim Sullivan said. "He’s always been one of our go-to guys. When we need somebody that can throw strikes — even if he falls behind a little bit … and make the other team put the ball in play, Josh is the guy who can do it. He is a battler."

"He’s always been one of our go-to guys. When we need somebody that can throw strikes — even if he falls behind a little bit … and make the other team put the ball in play, Josh is the guy who can do it. He is a battler."

The West Potomac lineup provided plenty of run support, scoring six in the first inning. After a run-scoring sacrifice fly by senior Sean Trenchard, the Wolverines plated five two-out runs, including a solo home run by junior Jayme Murray. Senior Todd Ferri drove in a run with a double and senior Dan Jarrell plated a pair with a triple.

The victory evened the Wolverines’ record at 4-4.

"The season hasn’t gone the way we expected it to go so far," Murray said, "but this just raises the bar, gets our confidence up."

West Potomac senior Sean Trenchard is one of the Wolverines' top hitters.

With a talented and experienced roster, West Potomac entered the season with its sights set on finishing near the top of the super-competitive Patriot District. The Wolverines stumbled out of the gate, however, starting 2-4 with district losses to West Springfield and Woodson, along with losses against McLean and Oakton.

Sullivan is in his seventh season as West Potomac head coach. He said the Wolverines have finished fifth five teams under his watch and eighth once, and the sudden jump in expectations might have contributed to the team’s slow start.

"Maybe part of our problem was we overhyped ourselves and put too much pressure on ourselves," he said. "We honestly expected to compete for the Patriot District championship this year. When you say that with the likes of Lake Braddock, South County, Woodson and West Springfield, that’s saying something."

West Potomac has responded to its slow start with a four-game winning streak, including a district win over Annandale, to improve its record to 6-4. The Wolverines have a deep pitching staff, led by Murray, Jarrell, Belanger and William & Mary-bound Andrew White, and a potent lineup led by Murray and Trenchard.

"To now say we’re going to compete for [first or second in the district], that’s a lot of pressure on the guys," Sullivan said. "They want it — they want it desperately — but we’ve just got to see if we can put everything together. I think we’ve got the talent. Can we do it? I don’t know."