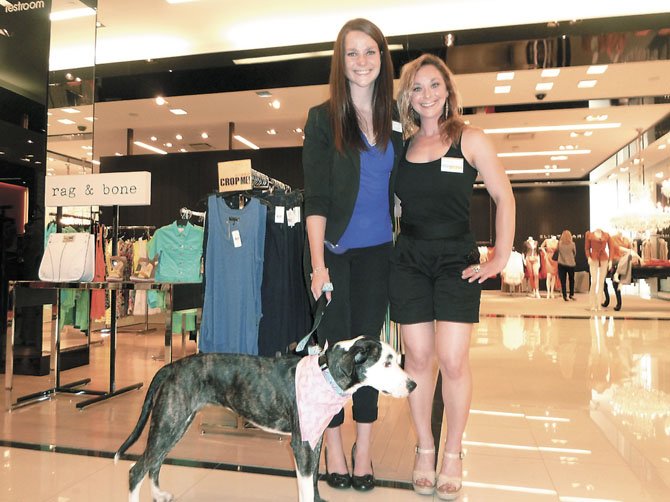 Animal lovers and fashionistas filled the second level of the Friendship Heights’ Bloomingdale’s, enjoying a fashion show, champagne and the opportunity to raise funds for McPaw (Montgomery County Partners for Animal Well-Being) to support the new Montgomery County Animal Services and Adoption Center. Even Ruby, an adorable and adoptable shelter dog was on hand for the ceremonies. As McPaw volunteer Madeleine Mersky explained, “Ruby is single and looking!”

The Spring/Summer line of designer Gerard Darel was featured at the March 28 event. Models were from MCPAW and included Potomac residents Vanessa Sperling and Dr. Alex Naini. Ali, Ella and Ben Sperling assisted emcee Aly Jacobs from MIX 107.3. The designer donated 10 percent of all sales as well as raffle items to the cause.

“Tonight is the first of many exciting fashion and fine-dining events MCPAW will host in support of Montgomery County’s new Animal Services and Adoption Center,” said Event Chairwoman Ellie Slotkin. “We are thrilled to be partnering with Bloomingdale’s to raise additional dollars required to create a facility that can house and care for the county’s homeless or stray animals while they await new homes. The center will also provide animal care services needed in the community, including a veterinary clinic for spay/neuter services, rabies shots and other basic preventative care.”

Bloomingdale’s is the only major retailer to carry the Gerald Darel line of modern, classic feminine clothing. The color for this season is a bright orange, and the models carried handbags, displayed jackets and accessories in this hue. Animal prints, scarves, crinkle skirts and crepe blouses were stylish, packable and easily dressed up or down. This French line is popular with Beyonce, Reese Witherspoon, Charize Theron and Angelina Joli.

“As a member of McPaw, I am excited to see the large turn-out,” said Lynn Novelli. “The fundraising is coming along. We are hoping animal lovers will become a part of the ‘Build Hope’ initiative which provides brick pavers and benches for recognizing someone important in one’s life. An engraved message will let the buyer show their support — or their company’s support — for the well-being of animals as well as create a lasting tribute to friends, family and beloved pets.” Novelli is the owner of “Chester,” a rescue cock-a-poo mix. “In the 35 years I have owned dogs, he is by far the best dog I have ever had. He’s just fabulous.”

Rob Tozzoli met his girlfriend, Andi Cleary, at a Humane Society fundraiser last May, 2010. Cleary, who serves on the McPaw Board of Directors said that his dog, “Mr. Z,” caught her eye. Between them, the two have owned 11 animals — all from shelters. She is a cat-lover, and he only has dogs, but the animals get along as well as their owners. Cleary explains how she feels about Rob and Mr. Z, “They’re both completely lovable and house-broken. Rob’s better behaved.”

To learn how to help McPaw, view the website at www.mcpaw.org. Plan to attend the next fundraising fashion event at Bloomingdale’s on April.