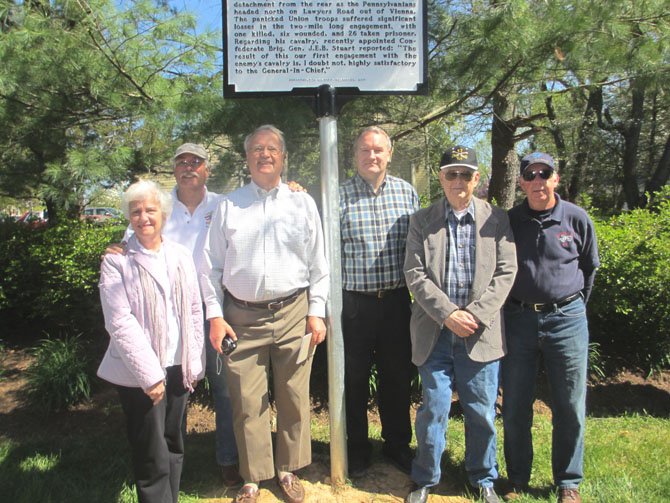 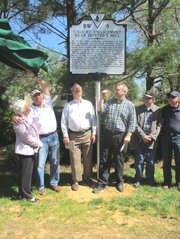 The action was the first engagement by troops under Stuart’s command against the Union cavalry in the Civil War.

"Our goal is to raise awareness and our collective memory," said HMDL history committee chair Steve Hull as he detailed the routing and background of the skirmish. "We want to remember the men who fought here, were injured here, killed here," said Hull.

Although the HMDL first thought of tracing the trail of the confrontation and marking the skirmish location five or six years ago, the project took flight about eight months ago, said HMDL history committee member Jim Lewis. The historical designation was approved by the Virginia Department of Historic Resources, and the commemorative plaque paid for by the Hunter Mill Defense League.

More than 50 people showed up for the unveiling. The 17th Virginia Infantry, Company D, in Civil War dress, presented the colors of the Union and Confederacy, and recorded Civil War music set the mood.

Hull described the skirmish from the perspectives of Col. Ransom, Capt. Bell and the embedded journalist who reported to his paper with a less-biased eye.

The Union and Confederate columns, prowling for one another in the area contained by Hunter Mill Road, Lawyers Road and Browns Mill, met up where what is now Kedge Drive intersects Lawyers Road.

Called the "Skirmish Near Hunter’s Mill" by Harper’s Weekly on December 21, 1861, the approximately two-mile-long action ended with retreat by Union forces serving under Capt. Charles Bell and the capture of soldiers, their weapons and horses by Col. Robert Ransom’s Confederate forces. Bell’s 94-man detachment suffered a casualty rate of 35 percent.

Hull alluded to the current debate between states’ rights and federal authority, noting that while history may not repeat itself, issues of constitutional jurisdiction remain.

Civil War buffs and local families clustered around the marker fronting Lawyers Road. Mayor M. Jane Seeman drove from Tennessee during the night to be in Vienna for the unveiling ceremony. Many guests lived nearby. Some guests, such as Trianne Freese, not only lived nearby but had a personal connection to the marker. Her great-grandfather fought with the Union army at sites in the Vienna area.

"I came because I live nearby but I was also curious," said Freese.

To learn more about the goals and activities of the Hunter Mill Defense League, go to www.hmdl.org