Event brings together people of faith to discuss faith, freedom. 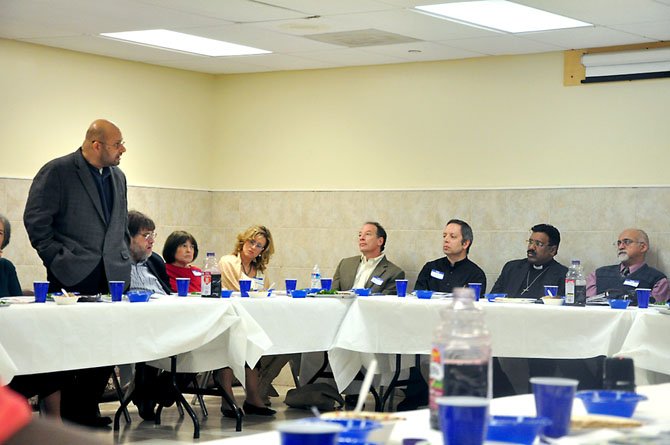 Rizwan Jaka, board member at the All Dulles Area Muslim Society, addresses the idea of interfaith peace and freedom during a Passover Seder held at the ADAMS center Saturday, April 14. Photo by Alex McVeigh.

Herndon — Andrea Barron was part of the first Jewish-Arab Seder 25 years ago, which was held in Washington, D.C. organized by local Jewish leaders to promote peace.

"We felt it was important for Jews and Arabs to come together, to affirm our support for a peaceful solution to the Israeli-Palestinian conflict," she said. "In those days we were part of a radical fringe of the Jewish community, who supported Palestinian national rights, as well as a safe secure Israel." 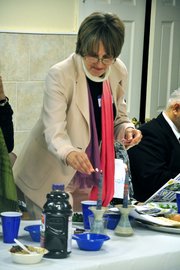 Barron was among several dozen citizens of Muslim, Jewish and Christian faiths gathered at the All Dulles Area Muslim Society Saturday, April 14, for a Passover Seder and discussion of world issues. The interfaith Seders have been going on for the past 10 years. For a few years they were held at a Baptist church in Falls Church, before Barron met ADAMS Executive Director Mohamed Magid in 2006.

"ADAMS is the perfect place for a Seder because it’s a mainstream mosque at the forefront of interfaith dialogue," she said. "We want to encourage dialogue and questioning, while at the same time respecting those who may disagree with us."

THIS IS THE FOURTH YEAR ADAMS has hosted a Passover Seder, the Jewish tradition that commemorates the exodus of Jews from Egypt more than 3,000 years ago.

"The ADAMS Center has been called a mainstream mosque, a liberal mosque, but I think we’re just a mosque that’s trying to do the right thing not just for our members, but Muslims in general, our surrounding community and the world really," said Farhanaz Ellis, interfaith director at ADAMS. "This is one of the most important events of the year for me personally, because there’s a lot of people out there, even in this century, that believe that this cannot happen, that we cannot have Jews and Muslims in one room without pulling each other’s hair out."

This year was ADAMS’ biggest Passover Seder yet. Last year’s theme focused on the Arab Spring, the uprising of several countries against their dictators. This year’s theme was peace among all groups, Muslims, Jews, Christians and all people of the world and their struggle for freedom.

Members of local Jewish, Muslim and Christian communities gather at the All Dulles Area Muslim Society Saturday, April 14 for an interfaith Passover Seder.

THROUGHOUT THE MEAL, guests took turns discussing their thoughts on the evening’s themes.

"With the freedom that we talk about, also comes responsibility," said Andra Bayless, one of the guests at the Seder. "The highest calling in all of our religions is to think not of ourselves, but other also. This is part of our civilization, to help those most in need within our society."

Lee Diamond said he believes there are limits to the freedom people strive for.

"We also have a responsibility to respect other people’s freedom, which to me means to rise above our background and to learn about our world, not fall into things like Islamophobia or anti-Semitism," he said. "We don’t want to take our freedom so far that we’re oppressing other people."

When the group reached the point of the meal when they read about the 10 plagues that fell upon the Egyptians, they took turns naming the plagues that they believed are currently affecting our society.

"Terrorism is a plague that we condemn and reject," said Rizwan Jaka, a board member at ADAMS. "We refuse to have our faith held hostage."