Giving Back to Mason
Votes

Giving Back to Mason

Steve Mullins of Great Falls returns to his alma mater to serve on the Board of Visitors. 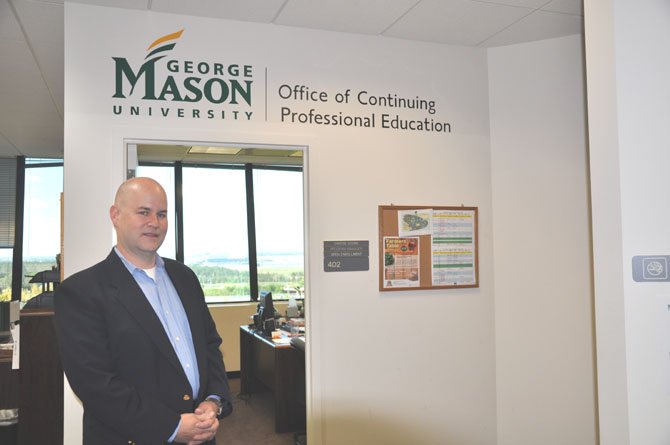 Steve Mullins at the Center for Innovative Technology building in Herndon where George Mason University has offices and classrooms. Photo by Jean Jianos

As high school seniors across the country are currently deciding the college to attend in the fall, local entrepreneur and chief financial officer Steve Mullins reflects upon the choice he made as a senior at Annandale High School to attend George Mason University and on his recent appointment to Mason’s Board of Visitors. "It is an honor to be asked to serve on the board of the university from which you graduated," says Mullins. At this point in his family life and his career, Mullins had asked, "What can I do to help the University? How can I give back a little?" The answer came when Governor Bob McDonnell tapped Mullins to join the Mason Board of Visitors at a critical time last fall when the Board was tasked with selecting a new president for the university. Mullins knew that selection "could be the most important decision for the University for the next 20 years," given the fact that the sitting president, Dr. Alan G. Merten, has led the university for the past 16 years. So, while the first month of Mullins’ service was dedicated to the selection of Dr. Angel Cabrera as Mason’s new president, effective July 1 of this year, the remainder of the last six months has been spent overseeing the implementation of policies designed to further the university’s strategic goals.

In describing itself, Mason states in its "Strategic Goals for 2014," that: "If there is one term that captures the history of George Mason University, that term is ‘entrepreneurial.’ . . . We have demonstrated an ability to be both creative and efficient in responding to the many opportunities the National Capital Region has to offer."

THAT DESCRIPTION can be equally applied to Mullins himself. Although he did not have a declared interest in the information sciences as an incoming freshman, while a student at Mason, Mullins decided to take an early computer programming course and realized its potential for extrapolating valuable information from data. He had an idea about the kind of information that he could sell and was inspired to form an information services company, contracting with a fellow student for the necessary programming skills.

John Backus, former chairman of the Northern Virginia Technology Council, has this to say about Mullins:

"Steve has done so much for our community and our entire State. As a CFO he has helped dozens of companies grow and prosper. At NVTC he brought insight into technology policy that helped make our State the top in the country for technology businesses. And his side business, building donor lists for political parties, has helped hundreds of candidates win elections over a 20 year period. Steve is tireless, and available 24/7. You are as likely to see him at The Tavern in Great Falls as you are at a Wizards game, a political fundraiser, or an NVTC event. He is always working to help out the companies he works for."

One of those companies, the cybersecurity firm Invincea, also got its start on the campus of George Mason University, having been founded by Dr. Anup Ghosh, a Research Professor and Chief Scientist in Mason’s Center for Secure Information Systems (CSIS). Not only does such an entrepreneurial incubation benefit student education and faculty scholarship, but in addition, since the patent-pending technology was developed in collaboration with CSIS, it creates financial revenues that are distributed to the university. George Mason Intellectual Properties, Inc. (GMIP) is the not-for-profit entity within the university that holds inventions, patents and license agreements; and that also explores ways in which to market Mason’s intellectual property.

AS A VISITOR, Mullins serves on the Finance and Land Use Committee of the Board, and he says that the business opportunities created by entities such as GMIP help that committee in achieving its dual goals of keeping tuition and fee increases to a bare minimum while moving Mason forward as a world class university. Mullins will continue to apply the same philosophy to his responsibilities on Mason’s Board of Visitors as he has to the investments he has made in his own education and business ventures:

"It is always a struggle to balance short term and long term goals, but if you employ long term methods -- do what is right for the company and figure out how you can create long term value, quietly going about building a good company -- you may have to wait, but you will eventually be rewarded for doing that."