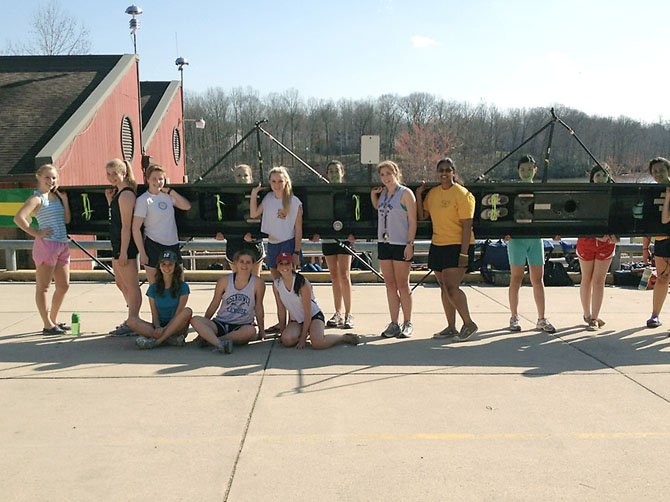 Some of the Langley women crew members displaying one of the boats that was re-laced in a show of support for Coach Hess. Photo Contributed

The Langley crew team has three regattas under their belt with some great successes: Several boats have come in first, second or third in their heats. The freshmen and novice boats have produced some great times – building future successes for the team. Out of 23 events, well over half of the boats have placed in the top three positions—including five first places finishes. Langley Crew has raised several hundred dollars for Share of McLean during their annual "Ergathon" — an indoor rowing competition held every year in February against West Springfield HS.

And Langley Crew has joined with the larger Langley community in supporting Coach Hess and his family. Coach Hess’s daughter was recently diagnosed with cancer and the Langley community has rallied to support the Hess family. There have been various fundraisers, including the students selling bright neon green shoelaces to show their support. If you are unfamiliar with rowing you might not know that the rowers actually lace their feet into special shoes built into the boats called foot stretchers. The Langley rowers re-laced the stretchers this spring with the green neon laces as a show of support.