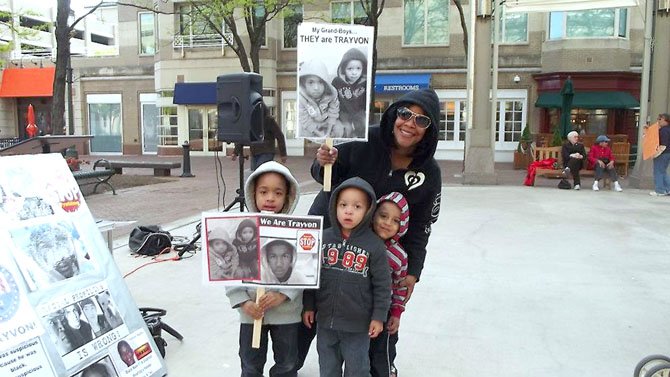 Reston — As the Trayvon Martin case began making headlines around the nation, Rev. Mary Barrino-Smith of the Community of All People United Church of Christ decided it was time to get the local community involved. By contacting local faith communities and spreading the word online, more than 150 people attended a vigil Tuesday, April 17 at Reston Town Center.

“We wanted to bring people together to show support for the Martin family, as well as our dissatisfaction of a law like Florida’s Stand Your Ground law,” Barrino-Smith said. “Our church is known for their activism when it comes to social justice causes, and we wanted to make sure our voice was heard.”

Barrino-Smith said the church takes particular issue with the Stand Your Ground law, and the 20 other states that have similar laws on the books.

Rev. Mary Barrino-Smith of the All People United Church of Christ addresses more than 150 people gathered at Reston Town Center Tuesday, April 17 to show their support for Trayvon Martin.

“We feel those are the kinds of laws that threaten people’s lives and their civil rights,” she said. “We see those laws as something to follow up on, to help open people’s eyes.”

“I’m glad the outcry across the country led to a further examination of what happened that day,” she said. “Obviously, we don’t know all the facts, but had the charges not been made, I feel like it’s something important that would have gone ignored.”

Deborah Love Rogers of the National Council of Negro Women Reston-Dulles section was in attendance April 17.

“It was a very good energy there, it was good to bring matters of national importance to the local community,” she said. “There were a lot of mothers and parents there, who I’m sure felt the pain of the situation. It was a pleasant surprise, I’ve never seen that sort of community response on short notice.”

More information on the church can be found at www.allpeopleucc.org.