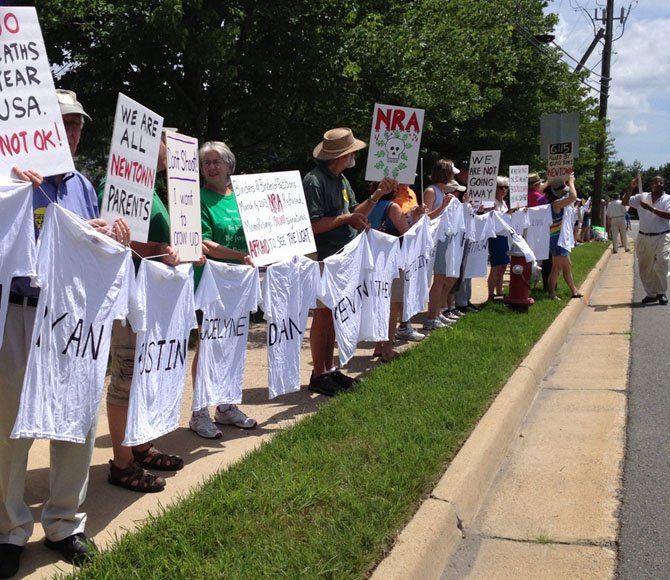 Members of the Reston-Herndon Alliance to End Gun Violence and local community members hold a vigil outside NRA headquarters to honor victims of shootings. Jasmine Kang

Every month, supporters of gun regulation hold a vigil outside of the NRA headquarters to honor the victims of shootings, as well as urge Congress to take action. The vigil takes place on the 14th of every month, which is the date of the Sandy Hook Elementary shooting. 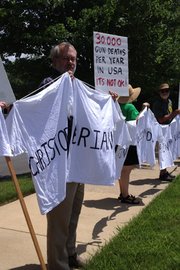 Larry Pullen holds a sign and t-shirts at the vigil. The t-shirts represent the victims of the Sandy Hook Elementary and Virginia Tech shootings.

“I come to express that we are way past time for gun regulation,” Del. Ken Plum (D-36) said. “The vigil is a way to keep it in the public’s mind. If it can happen once, it can happen again.”

Those attending the vigil hope that Congress will pass legislation regarding gun regulation.

“I’m fed up with the violence and lack of action,” Ralph Greenwood said. “A first step is reasonable control—registering weapons, instructions for safety, elimination of semiautomatic weapons and required background checks.”

The event is organized by the Reston-Herndon Alliance to End Gun Violence, but local community members and other organizations participate in the vigil. According to Joanne Simon of the Alliance, about 35 people attended the first vigil, but it has now grown to over 100 participants. 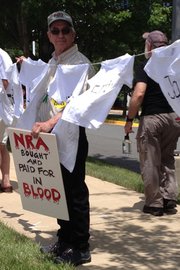 Ralph Greenwood shows his support for gun regulation with a sign.

“I’m here because I’m sick and tired of the deaths that can be prevented and for me, it’s a moral issue,” Alex Dixon said. “Guns have their place in our society but the way that they’re being regulated does not respect people’s inherent dignity and worth.”

Alice Englert, a resident of Warrington, attended the vigil in honor of her relative Daniel Barden, a victim of the Sandy Hook Elementary shooting.

A display of t-shirts representing the victims of the Sandy Hook Elementary and Virginia Tech shootings was featured.

“It’s a way to honor all gun victims, with the focus on Newtown and Virginia Tech,” Simon said. 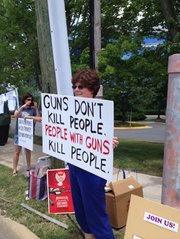 Donna Auritsh holds a sign for observers to see. Drivers passing the vigil showed their support by honking or waving.

The vigil took place the day after George Zimmerman was found not guilty in shooting of Trayvon Martin.

“Many of us are mourning that verdict, which was a miscarriage of justice,” Martina Leinz said. Leinz is the president of the Virginia chapter of Million Mom March, which advocates for gun safety.

The Alliance will continue to hold vigils on the 14th of each month in front of the NRA.

“It’s not just about Trayvon Martin,” Dixon said. It’s about the nameless and faceless that have died and I’m here for them.”

What would you like Congress to do regarding gun violence? 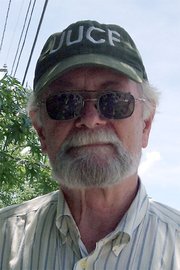 “Be courageous, think beyond the influence of the NRA and remember that U.S. citizens vote.” Bob Hatfield, retired, Oakton 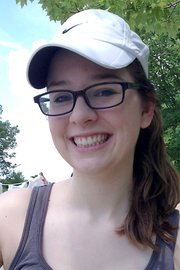 “For now, background checks would be the biggest step. For assault weapons, I don’t see any reason for someone to be carrying those.” Erin Moran, student, McLean 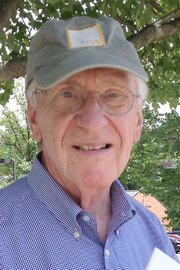 “I’d like to see Congress pass legislation regarding universal background checks and outlaw assault weapons, which are weapons of war and don’t belong in a civilized society.” Del. Ken Plum (D-36), Reston 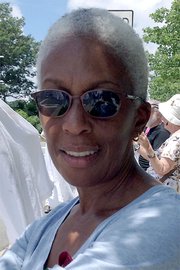 “I would like to see magazine sizes reduced and I don’t know if we’re going to get around to that so, at the least, some regulation on background checks.” Anne Alston, retired, Herndon