And Then there Was One
Votes

And Then there Was One

'Someone Who'll Watch Over Me' opens at Port City Playhouse. 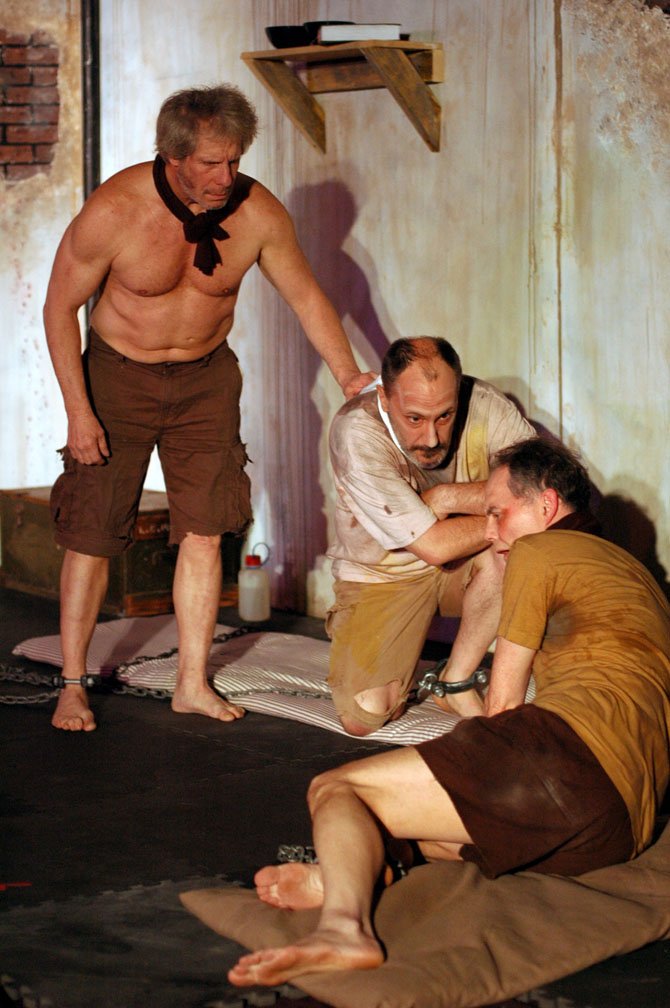 David James plays Adam (the American), Matthew Randall plays Edward (the Irishman) and John Shackleford plays Michael (the Englishman) in "Someone Who'll Watch Over Me." Picasa

It's been more than a quarter of a century since Irishman Brian Keenan, Englishman John McCarthy and American Terry Anderson were taken hostage in Beirut and held in a series of desolate cells throughout the city. Keenan was released after more than four years in captivity and went on to pen “An Evil Cradling,” a chilling account of his experience.

Inspired by conversations with Keenan, playwright Frank McGuinness adapted a fictionalized version of the ordeal in the 1992 award-winning “Someone Who'll Watch Over Me,” now expertly staged by Port City Playhouse in Alexandria.

As strains of Ella Fitzgerald's “Someone to Watch Over Me” wafts through the Lab at Convergence, we meet Adam, an American doctor (David James), Edward, an Irish journalist (Matthew Randall) and Michael, an English Literature professor who by his own admission can be a “sanctimonious prig” (John Shackleford).

Unsure if they are awaiting death or release, the three attempt to keep insanity at bay by imagining movies they might make, cocktails they might drink and letters they might write. In one of many standout sequences, Edward and Michael re-enact Virginia Wade's 1977 victory at Wimbledon, complete with Randall doing an uproarious impression of Queen Elizabeth.

“Someone” is a tour de force production for Randall, James and Shackleford , three remarkable actors who handle the "suffering and inhumanity” of their incarceration with such aplomb that audience members were moved to tears. Together they skillfully balance their grief and anger with moments of humor and camaraderie.

James gives a powerful and explosive performance, evoking the pent up rage of a caged animal as he wonders in despair “They're going to kill me for oil?”

Randall — with a perfectly intoned Irish brogue — has masterfully crafted the character of Edward, a volatile and powerful personality who veers between charisma and antagonism.

Last but not least is the truly unforgettable and tenderly tragic performance turned in by Shackleford. As Michael, he is riveting to watch in a poignant display of verbal wit in the face of the monotony of his senseless captivity.

Directed by Rosemary Hartman, the squalid set designed by Frank Pasqualino draws the audience into the mental anguish these men endure. Effectively lit by a single light bulb, the only props are water bottles placed next to grimy mattresses along with a copy of the Bible and Quran.

In the end, “Someone Who'll Watch Over me” is a well-written, superbly staged story of the unbreakable strength of friendships forged in the most dire of circumstances. Be prepared to laugh, to cry and to leave in awe of three of the finest, most perfectly calibrated performances seen on any stage.

The Port City Playhouse production of “Someone Who'll Watch Over Me” is playing now through May 5 at the Lab at Convergence, 1819 N. Quaker Lane, Alexandria. For tickets or more information, visit www.portcityplayhouse.org.