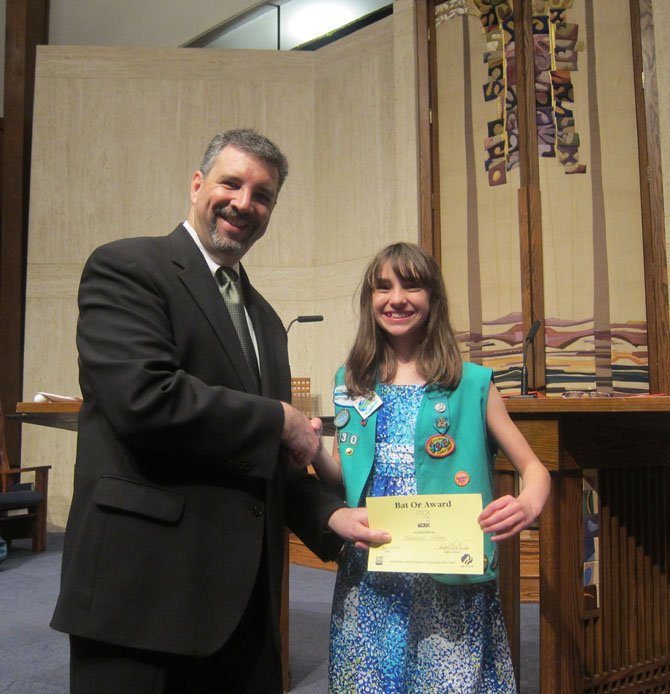 Madeleine LeBeau, a member of local Junior Girl Scout Troop 6730, received the Bat Or (Daughter of Light) Award in a ceremony at Temple Rodef Shalom in Falls Church, on Friday, April 20. The award is sponsored by the National Jewish Committee on Girl Scouting and honors girl scouts in grades 4-6 who have undertaken an extensive exploration of their Jewish faith, tradition, and heritage. The award has special meaning this year, the 100th anniversary of the Girl Scouts of America, as it recalls the significant contributions made by Jewish women in the beginning of the Girl Scouts movement, which was founded in 1912 by Juliette Low in Savannah, Ga. Three troop leaders in the Scouts’ first year were Jewish, with one later serving on the first Girl Scout Council and another becoming its secretary.

LeBeau was presented the award by Cantor Michael Shochet of Temple Rodef Shalom. Cantor Shochet served as LeBeau's advisor for the award.

"It was a great experience that I think other scouts would enjoy, if they have a chance," said LeBeau, age 10. "I want to thank Cantor Shochet for being my advisor. I learned so much."

LeBeau is a member of Junior Girl Scout Troop 6730. The troop meets at Temple Rodef Shalom and the scouts are in grades 4 and 5. LeBeau is a 4th grade student at Greenbriar West Elementary School.