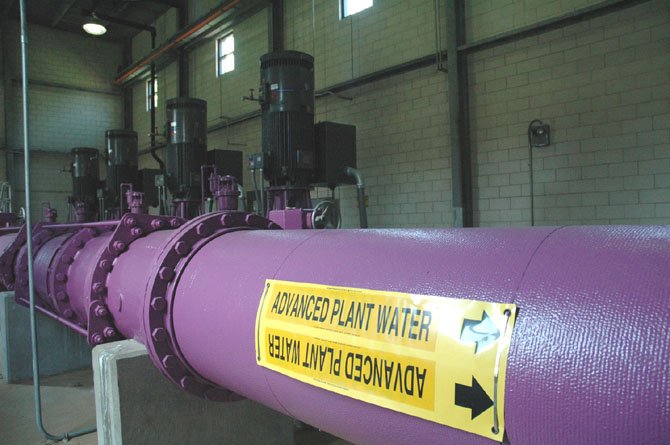 The purple pipes inside the Noman M. Cole Pollution Control Plant will funnel reclaimed water to a variety of sites in the Lorton area. Photo Contributed

The fairways at Laurel Hill Golf Club in Lorton and the South County Little League fields are getting a little greener this summer.

Starting next month, more than 400 million gallons of reclaimed water – bath, sink and laundry water that would have gone into the Potomac River and Chesapeake Bay - will be captured and reused to irrigate the golf course and little league fields. Reclaimed water will also be used for ball field irrigation at Lower Potomac Park and for energy processing at the Covanta Energy Resource Recovery facility.

In May, the Fairfax County Board of Supervisors will officially launch the water reclamation project at the Noman M. Cole Jr. Pollution Control Plant on Richmond Highway.

The project, which began in 2009, is partially funded by $6.5 million in federal stimulus funds through the American Recovery and Reinvestment Act and the Virginia Department of Environmental Quality Clean Water Revolving Fund Loan Program.

More than 500 million gallons of treated reclaimed water will be stored at the Covanta Energy Resource Recovery Facility.

The use of reclaimed water means that Fairfax County can conserve drinking water, preserving an estimated two million gallons of drinking water per day, according to county officials, and will generate revenue.

"In the long run, the county will earn money from selling reclaimed water, helping to offset taxpayer costs. The Park Authority will be one of those customers this summer," said Brian Worthy, spokesperson for the county.

Golf course users will not notice much change.