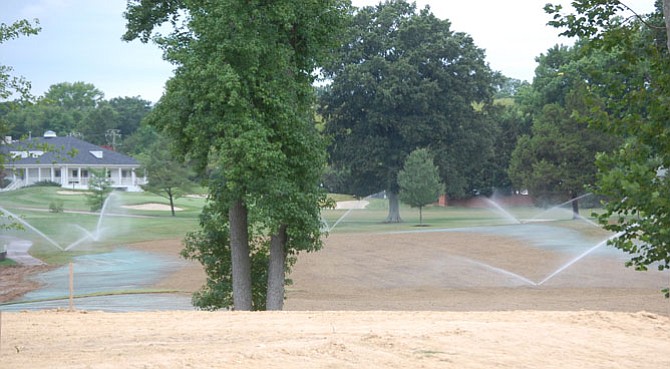 Irrigation sprinklers water small sprigs of Latitude 36 Bermuda grass in the tan area of the first-hole fairway. The blue material is mulch containing Fescue grass seed that was sprayed on disturbed areas of rough adjacent to the fairway. Photo by Michael K. Bohn

Spoils dredged from one of the irrigation ponds drying before being moved and shaped. The golf ball visible in the foreground had been hit into the pond before dredging.

An especially deep end of the upper pond will slow the water entering from upstream neighborhoods, which will allow silt to settle for future removal. 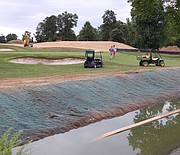 A portion of a streambank that workers have reshaped to reduce erosion and local flooding. Biodegradable coconut fiber mats cover the new bank, and the blue material is a mulch containing seeds for native plants and grasses that ultimately will stabilize the banks.

Members of Mount Vernon Country Club have been seeing more bulldozers than birdies during the past three months. The club closed its golf course in mid-June, and since then crews have been reshaping parts of the 128-acre greensward.

“We believe we have to be good stewards of our portion of the environment in the Mount Vernon area,” said Nick Greksouk, the club’s president. “So we undertook this project to not only improve the golf course but also try to manage it in environmentally sound ways.”

Greksouk explained that the necessity to revitalize the club’s silted-up irrigation ponds precipitated the current construction project. “We needed to dredge those ponds because they were no longer functional, and that was degrading the golf course.”

Greksouk said that a companion project is reconfiguring the banks of one of streams entering the golf course to reduce erosion, downstream silting and reduce flooding of fairways after heavy rains. The club had similarly fixed other streambanks in 2004 and had won praise and a cash award from the National Fish and Wildlife Foundation. For this project, the foundation awarded the club a $65,000 Small Watershed grant to help with expenses.

The third facet of the undertaking is changing the grass on the fairways. “We want a more sustainable grass that has benefits for the players and helps the environment,” Greksouk said. “We are planting a hybrid Bermuda grass that has been proven to be more environmentally friendly than our current Bent grass.”

The project required an 18-month process of coordination with local, state and federal authorities; public hearings and notifications; and permitting. Fairfax County officials determined that the club needed an amendment to its Special Exception to the county’s zoning ordinance. The club engaged a land-use lawyer, Inda Stagg from the law firm Walsh Colucci Lubeley & Walsh PC, to help with that process. Additionally, the members hired Stantec Consulting Services to create plans for the streambank, pond dredging and storm-water management initiatives.

Stantec’s George Rhodes oversaw obtaining permits from the Army Corps of Engineers, Virginia Marine Resource Commission, Fairfax County Wetlands Board, and Fairfax County Department of Public Works and Environmental Services. Rhodes also coordinated the selection of native plant species for planting after construction ends. He received inputs on the best vegetation from Fairfax County’s Urban Forestry Division, the Fairfax County Soil and Water Conservation District, and the county Wetlands Board. “All of the regulatory and permitting agencies that reviewed the project saw it as a means to improve the local environment and water quality,” Rhodes said.

The club’s first public step in the project was to send informal letters in May 2015 to residents living on the periphery of the country club to advise them of the club’s plans. The following August, Stagg sent letters via registered mail to adjacent property owners to notify them formally of public meetings and hearings about the project. Greksouk said all of the neighbors who spoke up ultimately voiced their support after hearing the details of the work. The next action was to brief the Mount Vernon Council of Citizens’ Association.

The county supervisor in the Mount Vernon district, currently Dan Storck, traditionally has relied on MVCCA to take a position on projects such as this one in a Special Exception amendment process. So club staff and members, led by Lou Haley, plus Stantec’s Rhodes, began briefing members of two committees within MVCCA — Planning & Zoning, and Environment & Recreation — in September 2015. Committee members, as well as neighbors of the club, asked many questions that ranged from details of the pond dredging to effects of the project on local wildlife. Club representatives and consultants returned in October and November to answer everyone’s questions. Cathy Ledec, chair of the Environment and Recreation Committee lauded the club’s attempts to meet every concern. “Mount Vernon Country Club is working very hard to be good stewards of their land, and the members recognize the importance of their greenspace.”

In December the MVCCA voted to support the country club’s project. The county Planning Commission approved the Special Exception Amendment on March 2, 2016, followed by the Board of Supervisors’ approval on March 15.

The project’s initial phase began in early spring when club staff cut down trees that interfered with the dredging, streambank renovations and associated grading. The timing was meant to minimize the impact on nesting periods of local birds. The club staff felled 73 trees, and will plant 713 replacement trees and 386 new shrubs over the next three years.

Silt in the water flowing onto club grounds had built up in the irrigation ponds over the years, drastically reducing their capacity. The club had the sediment tested before the project began and found nothing harmful to humans or wildlife. Additionally, personnel from the Virginia Department of Game and Inland Fisheries carefully removed all fish from both irrigation ponds last May. They transferred the native species to an undisturbed third pond, and disposed of a few invasive species, including Snakeheads.

Dr. J. D. Kleopfer, the state’s chief herpetologist, advised the club on how to ensure turtles could safely move on their own from one pond to another while each pond was sequentially dewatered.

Once the first pond had been drained, workers excavated the accumulated silt and increased the overall depth. They placed the dredging spoils on an adjacent fairway to dry. When ready, the crew will spread the material on existing holes and shape it to help channel rainwater off fairways into streams. The upper pond now has a deep area where the water first enters, a “forebay,” that will contain a rip-rap structure to capture incoming silt. The club’s staff will clean it periodically to help manage the expected future silt accumulation. Once the upper pond was refilled, the crew began repeating the process on the lower pond, which will not have a forebay.

Workers have reshaped the streambanks next to Old Mill Road to better handle storm water and reduce erosion. The new, sloped banks were seeded with native plants and grasses and covered with protective coir matting made of biodegradable coconut fiber. Additional vegetation will be added later.

Portions of the Mid-Atlantic region on the East Coast provide serious turf management challenges to golf course superintendents. Elliott Dowling, an agronomist with the United States Golf Association who works with Mount Vernon, recently described the difficulties in the region. They arise because the hot summers bedevil golf courses with cool-season grasses, such as creeping Bent and Rye, and the winters can kill warm-season varieties, largely Bermuda hybrids. Consequently, the USGA sponsored research at Oklahoma State University to develop Latitude 36, a new Bermuda hybrid designed for the Middle Atlantic area.

“Latitude 36 improves both playing conditions and turf management,” Dowling said. “From a golfer’s perspective, it provides a uniform playing surface that can handle the summer heat. From a management and environmental standpoint, the grass requires fewer inputs than the most common cool-season fairway grasses. The hybrid needs less water, fertilizer, insecticides and fungicides.” Dowling called Latitude 36 “a home run for Mount Vernon.”

Mount Vernon’s golf course superintendent, Mike King, welcomes the renovation of the ponds, streambank restoration, and the shift to Latitude 36 fairways. “First, the greater pond depth will give us a more consistent water quality and eliminate algae blooms in the shallow water,” he said recently. “The reshaping of the streambanks will cut erosion and reduce flooding. The new fairway grass will allow us to reduce our annual irrigation requirements by 50 percent, and save the club up to $50,000 a year on the cost of fungicide, pesticide, and fertilizer.” Another benefit, King said, is that the quality of the water flowing out the golf course into the Potomac will be improved.

King said the only downside to the new fairway grass is the difference between irrigation needs of the Latitude 36 and the surrounding rough, which is mostly Fescue grass. The latter needs more water during the growing season, so he may have to reconfigure sprinkler head patterns and locations.

The new fairway grass had grown in on six holes by Aug. 11, so the club opened them for play. The entire project will be finished by the end of October.