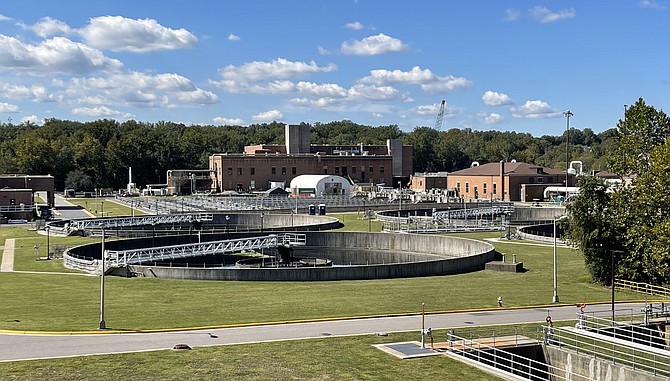 the same water that has been on the earth for four billion years. Falling rain may seem new and fresh, but the earth is a closed system; no new water is being added to our planet. To keep water safe for drinking and other uses, the earth’s huge natural recycling system gets a helping hand from the Noman M. Cole Jr. Pollution Control Plant, in Lorton. Owned and operated by Fairfax County, the 400 acre treatment center operates 24/7 all year; one five plants serving the area. The plant celebrated 50 years of service in October 2020.

Virginia Master Naturalists touring the plant on Oct. 1, got an up-close look at the operations that assure reused water meets or surpasses national and state water quality requirements. In the process of water t 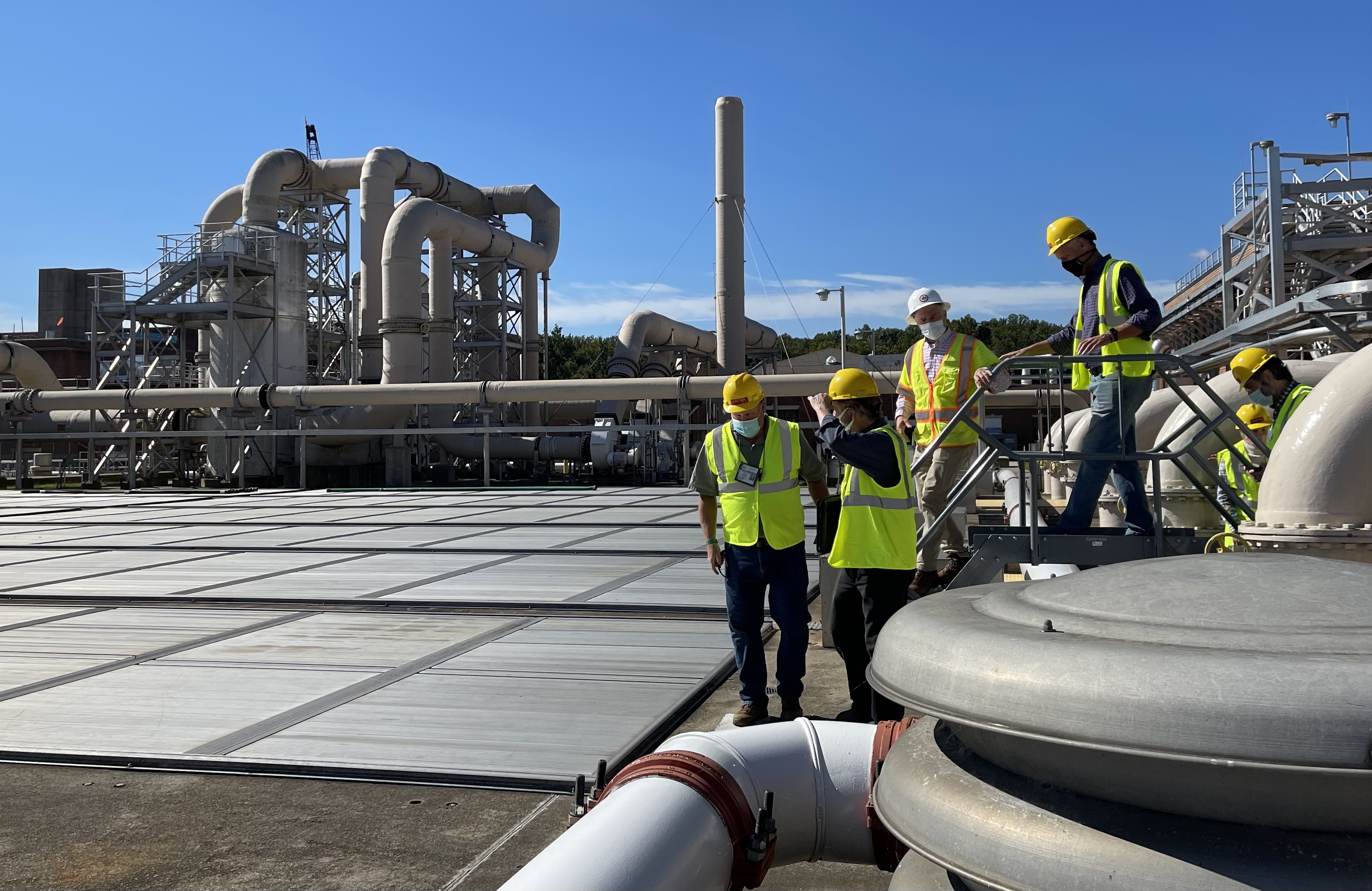 Plant Director Mike McGrath, (white hat) explains one of the primary processes where solid matter and floating materials are separated in covered tanks.reatment, wastewater and sewage go down your house pipes, entering a system about 3,000 miles long; reaching the Cole plant in four to five hours by gravity, assisted by 63 pumping stations. Upon reaching the plant, the first filtration pass, through mechanically controlled screens, separates out debris, such as sticks, rags, and other objects harmful to the system, which is hauled to the landfill; at a rate of 2 to 3 tons per day. The next step separates out other grit and sand matter, heavier than water. The screened waste water then goes into large tanks, covered for odor control, for about four hours, where solid matter either settles or floats, and is removed by mechanical rakes. That filtered liquid flows to eighteen foot deep aeration tanks to supply oxygen to natural bacterial microorganisms which feed on organic matter and nutrients in the filtered water. 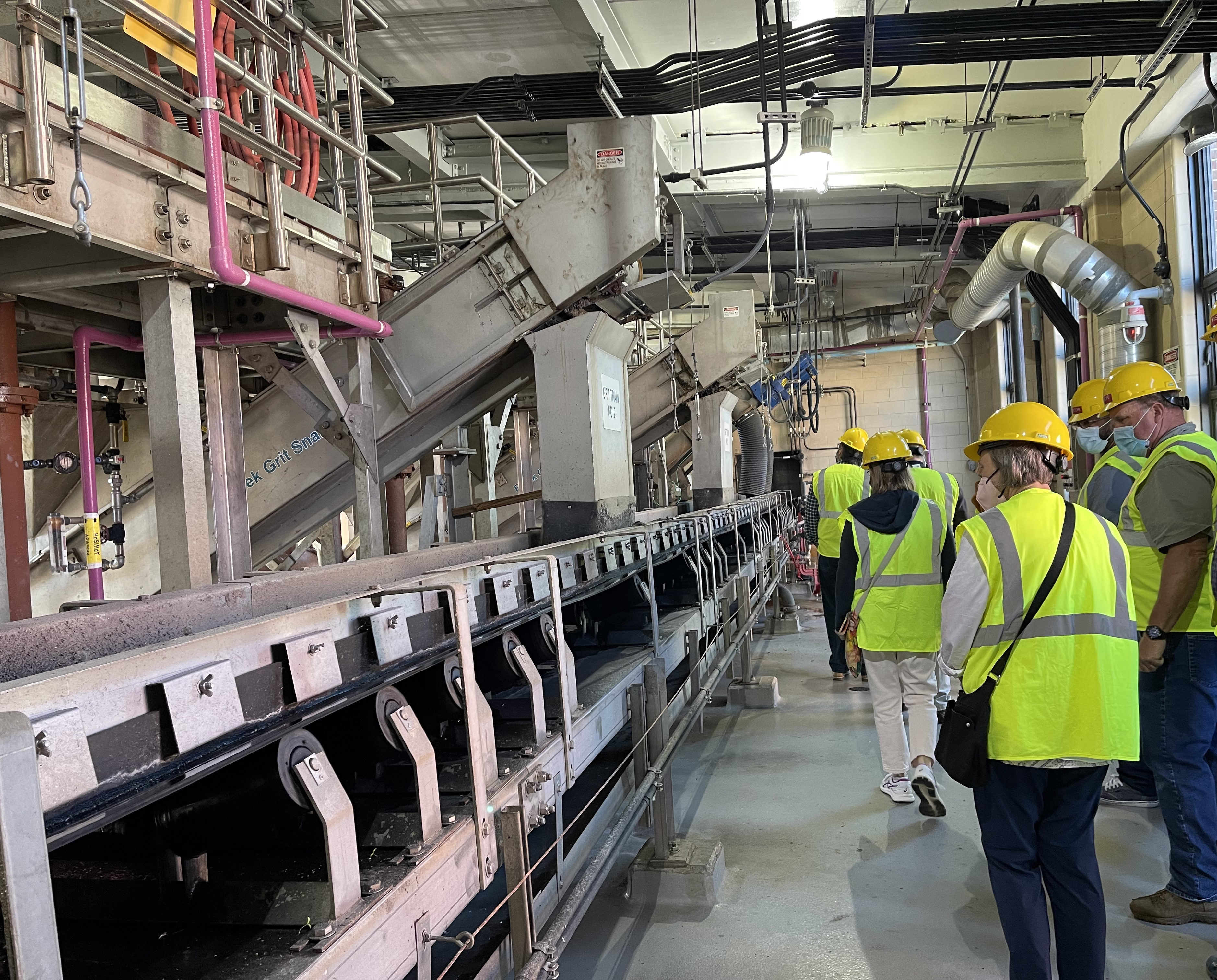 About 100 million pounds of bacteria assist the cleansing process. Some microorganisms are collected for reuse; the excess biosolids are collected, burned, and hauled to the landfill where they are contained in ash pits. The cleaned water flows to either a five- or seven-million-gallon holding pond. At that point  it is sufficiently clean to meet water quality standards. Water birds, and the occasional fish likely dropped by Ospreys nesting on site, can be seen enjoying the ponds.

Cole uses yet another bio-filter, beyond the filtration done at many treatment plants: Moving Bed Biologic Reactors (MBBR). The plant was the first to use this large scale microbiological model for sewage treatment in the U.S. Multi-surfaced plastic objects in large numbers churn in an aerated tank, providing increased surface for growth of food to sustain the microorganisms relied upon to bring down nitrogen levels, which otherwise would be harmful to aquatic systems and the environment.

In the final step, the water is disinfected with either sodium hypochlorite or ultraviolet light. The treated wastewater can then be released into Pohick Creek, soon reaching Gunston Cove and entering the global recycling system.

It is no small job to keep our water clean.  Cole, with a capacity of 67 million gallons per day, usually treats and releases approximately 40 million gallons of treated waste water per day; the equivalent to 60 Olympic sized swimming pools. About 170 employees work at the plant; others monitor businesses to assure regulatory compliance. The plant operates an in-house State certified laboratory for daily testing of nitrogen, phosphorus, and other pollutant levels. Employees and contractors check sewer lines using closed circuit television to avoid costly pipe failures. Residents can do their part by keeping grease, pesticides, paint, wipes, medicine, dental floss, paper towels, feminine hygiene products, and other items harmful to the system away from drains and toilets. For more information, see www.fairfaxcounty.gov/publicworks/wastewater/what-you-can-do.