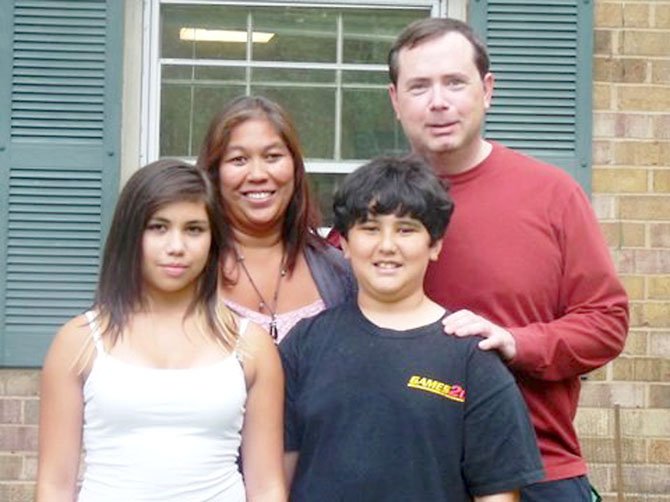 Springfield — Tracy Goodwin is an expert juggler. Not the circus kind of juggler—the parent kind.

She’s the mom who amazes other moms by keeping several balls in the air at the same time, juggling a job as a substitute teacher, a mom to two pre-teens, a stepmom to two grown children and serves as a full-time volunteer for the PTA.

“Tracy is the queen of volunteers,” said Orange Hunt Elementary School Principal Jason Pensler. “I’ve worked at many schools, but Tracy will drop everything to support whatever we’re doing.” In July, the Springfield resident received the top award for volunteering as she was named the state’s 2012 Elementary School PTA Volunteer of the Year.

“I was surprised by the award, to say the least. Really surprised. I had no idea this was coming,” Goodwin said. 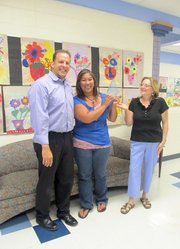 In his letter endorsing her as a candidate for PTA Volunteer of the Year, Pensler wrote that she was a “perfect model for a parent volunteer…she knows how to motivate students to strive for excellence.”

GOODWIN’S LIST of volunteer activities is exhaustive. “On average she has donated a minimum of five hours per week as a volunteer, but some weeks it seems as though she must live at the school,” said Nancy Thompson, a former OHES PTA president. Thompson put together the nomination form for the Volunteer of the Year Award for the Northern Virginia PTA district. After Goodwin won that award, Thompson nominated her for the state volunteer award.

“She doesn’t want to be in the limelight. She genuinely wants to help the students, and she’s got this boundless energy and enthusiasm,” Thompson said.

In her role as hospitality chair, Goodwin provides monthly breakfast and lunches for the staff, which includes collaborating with room parents in various grade levels to coordinate the collection of donations for the meal. The baked potato bar and the Mexican fiesta were the most memorable meals, according to teachers.

Goodwin also chaired the school’s sixth grade variety show, and choreographed many of the routines. In addition, she volunteers for chorus concerts and math nights, she has served as teacher appreciation week chair, the Bingo Night food coordinator, Fall Fest food coordinator, Safety Patrol coordinator and room parent. Her volunteer activities extend beyond OHES: she is a Cub Scout leader for Pack 685, and a parent volunteer for West Springfield High School’s Crew Team.

Goodwin said the support she receives from the school is critical. “The key for me is the PTA Board,” said Goodwin. “They give me all the support I need. If I send an email to them or the administration, I get an answer, and everyone is open to my ideas.”

TERESA ELDER, Goodwin’s neighbor and the treasurer of the Key Center PTA, said her friend deserves the accolades. “Without volunteers like Tracy, who give more than 100 percent, many of the programs would not run as smoothly,” Elder said.

Goodwin said she became involved with the school when her daughter Alana, now 12 and about to enter 7th grade at Washington Irving Middle School, began volunteering her mom for events.

“The teachers would ask for something, and she’d say ‘my mom will do it.’ So I had to do it,” Goodwin said. “I guess it started from there. My kids want me to be involved, and I don’t want to disappoint them.”

Although Alana won’t be at Orange Hunt, Goodwin’s son, Stephen, 11, will be a sixth grader this year. So Goodwin has just one more year of volunteering at OHES.

Unless Principal Pensler gets his way.

Pensler said that Goodwin has a seven to 10-year “volunteer contract” after her children graduate from the elementary school. Goodwin said he’s joking. “At least, I think he’s joking,” she said, smiling.