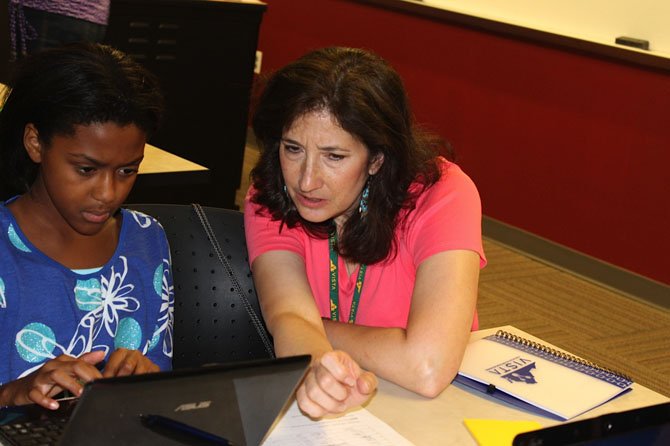 About 50 local students spent part of the summer transforming water into oxygen and trying to create a self-sustaining colony on Titan, the largest moon of Saturn at a two-week summer camp. The program was part of the Virginia Initiative for Science Teaching and Achievement (VISTA) at George Mason University, a program that aims to get kids from high-need schools interested in science, technology, engineering and mathematics (STEM).

George Mason in Arlington hosted students from Hoffman-Boston Elementary School in Arlington; Belmont Elementary in Woodbridge and Mayfield Intermediate School in Manassas. The children conducted experiments ranging from building a model floor plan for a colony on Titan and designing a first aid kit from biodegradable materials, to testing the ability of a solar car and creating recyclable art.

“This was different from the way we study science in school, where we mostly learn from books,” said Nuha Chowdhury of Hoffman-Boston Elementary School. “It might be my second career option to be a scientist, mathematician, or engineer.”

“We did big experiments, like we made water and oxygen. I never knew we could do that. This might alter my second career plan.”

Students say they were inspired by hands-on experiments: “Here at science camp, we did big experiments, like we made water and oxygen. I never knew we could do that,” Ezra Assafe, a rising sixth grader who attended Hoffman-Boston last year. This might alter my second career plan.”

Campers created science projects which they presented to their teachers and parents. “The teachers commented that they were amazed at not only how well behaved and engaged the students are when doing hands-on, inquiry science but also how much the students learned and retained over the two weeks,” said Mollianne Logerwell, VISTA’s director of science education. “Students routinely talk about how much fun they are having while learning. This year, one student commented that it was like having school at an amusement park.”

The students were also joined 27 elementary school teachers from Arlington, Fairfax, Spotsylvania and Prince William counties and Manassas City who participated in a four-week science institute at George Mason. In addition to working with the science camp, the teachers had an opportunity to study with local scientists.

“This is my 27th year teaching, so it's really saying something that I'm so excited about this” said Ann Heidig, who teaches third and fourth grade at Taylor Elementary School in Arlington. “We've been working on handing over more of the responsibility for the learning to the kids, letting them come up with how they want to solve a problem. I've always incorporated hands-on activities in my teaching, but now I'm working on doing more open-ended activities. Rather than handing kids cookbook lab experiments, the kids are designing the experiments themselves. The kids are transformed by it. Their self-esteem rises, they get involved and they realize that science is something they can do.”