Del Ray was once home to an infamous gambling operation creating by a double-dealing senator. 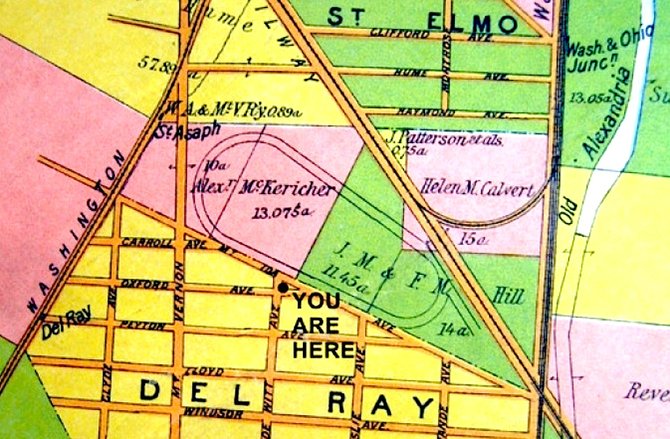 The St. Asaph Racetrack operated between a neighborhood known as St. Elmo and another neighborhood called Del Ray. After the track closed, the two neighborhoods were included in the newly created town of Potomac. Image courtesy of Alexandria Local History Special Collections

You’d never know it today, but Del Ray was once the capital of gambling in Northern Virginia. The old St. Asaph racetrack is long gone, replaced by the quaint suburban-style cottages. But the story of how the track came to be and what happened to it are a fascinating and little-known window into the city’s history.

The story begins in Richmond in 1896. There we find state Sen. George Mushback (D-14), a former Alexandria City Councilman who went on to represent the city in the House of Delegates before moving on to the state Senate. In a chilly Senate chamber that January, Mushback introduced a bill that would have drastic consequences in Alexandria and beyond. The effort was aimed at reducing the scourge of gambling, a vice that had gripped the commonwealth after several high-profile acts of violence. Legislators such as Del. Addison Maupin were pushing for the General Assembly to close a loophole to the existing anti-gambling legislation that allowed so-called “agricultural societies” from running games of change.

Like many legislators before and after, Mushback seized on the opportunity.

Unbeknownst to his colleagues in Richmond, the senator from Alexandria was also the president of the Alexandria Driving Club — a racetrack operation that would later be known as the Gentleman’s Driving Park at the St. Asaph Junction and ultimately the St. Asaph Racetrack. Mushback was one of the original investors in the operation, which included a host of names that remain familiar today: William Daingerfield, George Uhler, Park Agnew. John Marriott Hill, who managed the city’s opera house and printing establishment, managed the betting.

Working together with Maupin, who was trying to close loopholes, Mushback crafted a bill that created a new loophole — one that would benefit himself by allowing gambling at driving clubs. When the smoke cleared from that session, Mushback had his legislation and the St. Asaph Racetrack had a competitive advantage over other operations that had now been rendered illegal. Mushback was able to accomplish this while retaining a sterling reputation.

“As a lawyer, he was eminently successful,” gushed the Richmond Times obituary five years later. 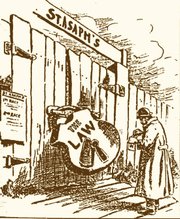 Courtesy of the Library of Congress

This cartoon appeared on the front page of the Washington Times on Jan. 13, 1905.

THE RACETRACK invented a number of slippery bookkeeping practices to skirt the law. Because Virginia law covered “money forwarded to race courses,” the operation forwarded all claims to the West Virginia Athletic Association. And printed on the back of every ticket was a vigorous statement denying that the operating is in any sense a pool-betting operation. The Alexandria Gazette carried advertisements for the track, which boasted “Racing Every Monday, Wednesday and Friday Until Further Notice — Objectionable Characters Will Be Positively Excluded.”

But the track was, indeed, full of objectionable characters. The Gazette carried a number of items about shameful activities at the track, including forcing some of the horses to wear lead shoes to slow them down and skew the races. That attracted the ire of Joseph Suplee, who had moved to Del Ray the previous year. Suplee helped circulate a petition against the racetrack during the next legislative session in Richmond. Ministers and businessmen headed mass meetings calling attention to the scourge of racing, gambling and their associated violence. Suplee told the Gazette he was “defying anyone to prove the race track had brought any dollars into the community … it kept away good, law-abiding citizens.”

But change would not come from Richmond. Instead, it would come from the Alexandria County Courthouse.

In 1903, a lawyer from South Carolina named Crandal Mackey announced his campaign for commonwealth’s attorney in an effort to unseat incumbent Richard Johnson. Mackey based his campaign on ending the scourge of gambling in Northern Virginia — not just at St. Asaph Racetrack but also in Rosslyn and Jackson City. If elected, Mackey promised, he would close every gambling resort in Alexandria.

“Mackey says Alexandria County has been the dumping grounds of all the riffraff and gamblers in Washington,” the Washington Times reported. “He proposes to make the place habitable so that the land can be sold and a higher standard of morals fixed.”

Johnson, on the other hand, was supported by the gamblers. And money was flying in both directions during the campaign. The Washington Times reported that barrels of money were opened and their contents were “scattered in fabulous quantities.” In November, the vote was close. Johnson won the Arlington District and the Jefferson District by narrow margins. But Mackey had a strong showing in the Washington District, which was enough to put him over the edge — just barely.

Mackey won the election of 1903 with a two-vote margin of victory.

Johnson hired a team of legal aces to help him contest the victory, including Francis Smith (Mushback’s longtime law partner), Edmund Burke (grandson of Robert E. Lee) and a young man named C.C. Carlin who would later go on to represent Alexandria in Congress. The legal team ended up dropping the fight against the election, although they would later reunite.

The grandstand and judges tower were long abandoned when this photograph was taken in 1914.

IN MAY 1904, Mackey staged a dramatic raid on the racetrack. Armed with sledgehammers and crowbars, the posse smashed the gambling equipment and threw the slot machines into the river. But the poolroom was back in business before long. So Mackey set out to gain an indictment, releasing members of a grand jury to visit the racetrack and place their own bets to gather evidence. The ruse worked, and Mackey was able to acquire 19 warrants against the operations owners and operators. Six men were arrested.

By the time the St. Asaph six made their first appearance in the courtroom, they had a familiar legal team — Smith, Burke and Carlin. The same lawyers who were fighting Mackey’s election a few months earlier were now fighting his central campaign promise. And they had a trump card up their sleeves, the Mushback law, which carved out a special exemption that was specifically designed to help the St. Asaph Racetrack.

The legal fight dragged on for months as the newly elected prosecutor stumbled on procedural questions. But Mackey continued his fight, and was eventually able to persuade a judge to agree. In 1905, the St. Asaph Racetrack closed its doors for good. Three years later, the property fell under the jurisdiction of the new Town of Potomac.

Today, the track has been replaced by block after block of residential housing. But a quick glance at a map will show the tell-tale dog-leg angle exposing where the St. Asaph Racetrack once dominated the landscape of Del Ray.