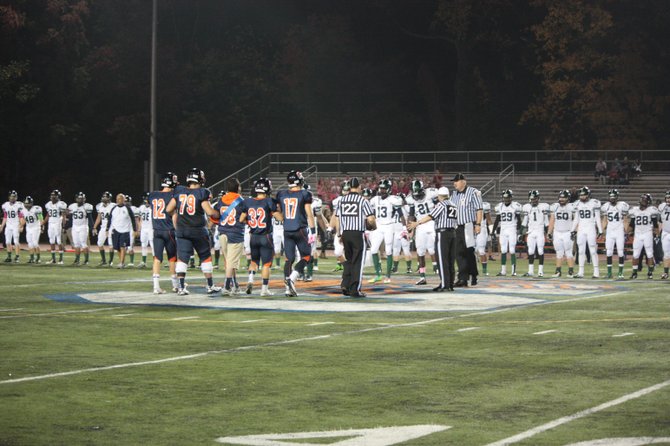 For those of you who may have missed it, last Friday night's Varsity Football game between West Springfield High School and South County Secondary School proved to be more than just a game.

As has become customary, the Spartans of West Springfield escorted one of their captains, Jordan Trunfio, to the center of the field for the coin toss. Jordan is battling brain cancer, and the team has dedicated its season to him and his struggle. However, this toss was not like any of the previous ones. As Jordan and the other West Springfield captains approached the center of the field, the entire South County Football Team proceeded onto the field. In a show of solidarity, the team lined up, tipped their helmets to Jordan, and wished him well as he battles forward. Also at this time, the South County coaches presented Jordan with several tokens of their support that included items signed by the Washington Redskins Organization, who were also expressing their support. What happened in those few moments was an example of true sportsmanship, leadership, coaching and community.

To Coach Gerry Pannoni, his staff, and the entire South County Football Organization—thank you for supporting our team and our captain.

There are events and challenges in life that remind us that football is just a game and true heroes all wear the same color jersey.

For those of you who may have missed it, you missed something special.