Sikhs Bring Foundation of ‘Service to Others’
Votes

Sikhs Bring Foundation of ‘Service to Others’ 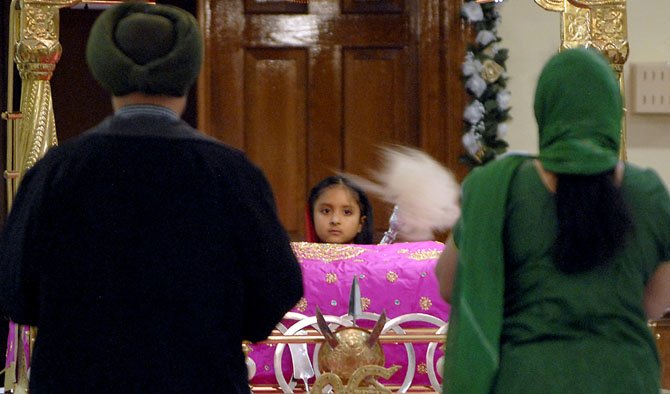 A child and her parents during prayer services at the Sikh Foundation of Virginia in Fairfax Station on Thursday, Nov. 14. The Dias where Guru Granth Sahib (the Holy Book) is adorned is called Darbar Sahib (Holy Court). Photo by Robbie Hammer.

On a recent Thursday evening, Ajaib Singh, 78, one of the founding members of the Sikh Foundation of Virginia, politely escorts a visitor to the area where one removes shoes and dons a headscarf.

In the background, the melodic vibrations of a harmonium blend with the sounds of men, women and children chatting as they sit together on mats on the floor. They are chopping large bowls of onions and other vegetables for a communal meal after an outreach service. 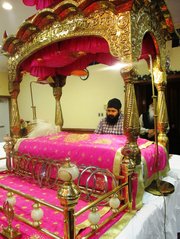 Manpreet Singh Behniwal, a member of the Sikh Foundation of Virginia, is seen behind the Palki, the golden throne where Guru Granth Sahib, the religious text of Sikhism, is placed during an interfaith outreach forum at the temple, known as a gurdwara, on Saturday, Nov. 17.

“You see, no one is more elevated than any other,” said Singh, noting that everyone sits on the floor during communal meals and during worship service.

Singh said that equality and service to others are key tenets of Sikhism, a monotheistic faith. “I like to say we’re a grassroots movement,” Singh said, smiling.

Ajaib Singh came to the United States as a graduate student to University of California, at Davis, in August of 1958. After completing his Ph.D. studies in chemistry in 1961, he came to the east coast as a research fellow at Harvard University in Cambridge, Mass.

He and his wife Majit Kaur consider themselves proud members of the SFV congregation and proud American citizens. Ajaib said he wants to share the SFV mission with others, to promote respect and understanding of Sikh values.

ON SATURDAY, NOV. 17, the Sikh Foundation hosted people from different faiths to share their thoughts on selfless service, what it means in their faith and how they personally pursue it in their lives. The panel included protestant missionaries and a Coptic Christian immigrant from Ethiopia. During the event, the Sikh community also collected dozens of boxes of winter clothes to send to those still suffering from the aftermath of Hurricane Sandy.

“This event will be marked as the beginning of a new era of interfaith efforts followed by many similar projects where the youth of different faiths will work collectively and help the needy,” said Surinder Singh, an active member of the foundation. 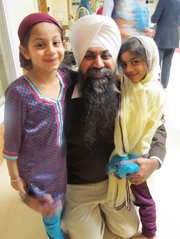 Surinder Singh, a member of the Sikh Foundation of Virginia in Fairfax Station, with his daughters Asees Kaur (right), 5, and Jeevan Kaur (left), during a communal meal at the temple, known as a gurdwara, on Saturday, Nov. 16. Sikh leaders hosted an interfaith outreach forum at the temple, which has more than 300 worshipers.

Although Sikhs do not have a particular day of worship, the Fairfax Station temple holds services on Thursdays and Sundays. A formal gurdwara service includes the singing of hymns and recitations from the Guru Granth Sahib, Sikhism's Holy Scriptures.

The temple is a welcoming home to many immigrants from India as well as those born in the United States, Singh said.

The Fairfax Station gurdwara, like many around the world, includes classrooms, a Langer Hall for community meals, a sanctuary and a community center, which Singh said is a sign of the religion's values of service and equality.

"Sikhism was founded in an area and in a time in which inequality was rampant," said Navdeep Singh, assistant executive director at the Sikh American Legal Defense and Education Fund and a member of the Fairfax Station Temple his entire life. "If you were a woman, you were less than a man. If you were poor you were less than a rich person. Based on what caste you were, that defined your entire life. Sikhism was a rejection of those ideas."

SINCE THE 9/11 TERRORIST ATTACKS by Islamic extremists, Sikhs sometimes have been mistaken for Muslims, because of their beards and turbans, and have been the target of hate crimes and discrimination. Many American Sikh women dress like other Westerners or wear the salwar kameez, a colorful north Indian garment of a long shirt and loose-fitting pants.

Gurpreet Singh, a member of the Fairfax Station Temple, said most men wearing turbans are Sikhs, not Muslims.

“I remember the bumper stickers that appeared on cars after 9/11. ‘I am Sikh. I am American.’ But it shouldn’t matter whether it’s a mosque or a temple. Hate is hate, and it’s wrong.”

Sikhs attending a Sunday service at the Fairfax Station temple.

Navdeep Singh said the Sikh community in Fairfax Station was profoundly touched by the outpouring of support from neighboring churches in the wake of the deadly attack on the Wisconsin Sikh Temple on Aug. 5, when a gunman shot and killed six followers. During a candlelight vigil held at the temple, more than 300 people of all faiths gathered for an evening of unity, resilience and hope.

Politicians and police officers, Muslims and Jews, children and seniors stood side by side on the grounds of the temple, holding up candles, murmuring prayers of peace and listening quietly as community leaders promised solidarity with the Sikh community and reflected on the violence in Wisconsin.

“One might say our community should retreat and live in fear,” Singh said, “but Sikhs will keep the doors of the gurdwaras open.”