Transcending Fear With Messages of Hope 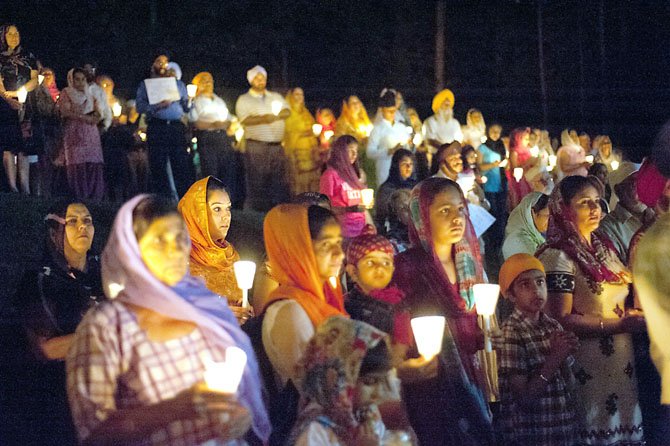 More than 300 people of all faiths gathered for a candlelight vigil at the Sikh temple in Fairfax Station on Thursday, Aug. 9, less than a week after a gunman opened fire at a Sikh temple in Wis., killing six and injuring three. Photo by Deb Cobb. 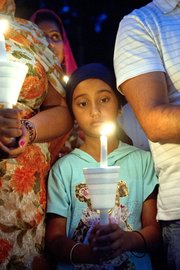 More than 300 people gathered at the Fairfax Station Sikh temple on Aug. 9 for an interfaith candlelight vigil to honor the victims of the Aug. 5 shooting at the Wis. Sikh Temple.

It was an evening of unity, resilience and hope as more than

300 people of all faiths gathered for a candlelight vigil at the Sikh temple in Fairfax Station on Thursday, Aug. 9, less than a week after a gunman opened fire at a Sikh temple in Wis., killing six and injuring three.

Members of the Sikh Foundation of Northern Virginia, which hosted the vigil, welcomed visitors to the gurdwara (or temple) by providing headscarves to guests and inviting them into the sanctuary for an interfaith prayer service.

“No one ever has to ask to be allowed to participate here, no matter what your faith. Everyone is welcome,” said Fermiur Singh, who greeted Sharon Bulova (D-at-large), chairman of the Fairfax County Board of Supervisors and other community leaders.

POLITICIANS AND POLICE OFFICERS Muslims and Jews, children and seniors stood side by side on the grounds of the temple, holding up candles, murmuring prayers of peace and listening quietly as community leaders promised solidarity with the Sikh community and reflected on the violence in Wis.

Fairfax County Board of Supervisors Chairman Sharon Bulova (second from left) attends a gurdwara service at the Fairfax Station Sikh temple on Aug. 9.

“Our nation and our country are made stronger by standing in solidarity when someone is hurt,” Bulova said during the vigil.

“Never again,” said a representative of the Jewish faith. “Someday we will learn that we are stronger by sharing our differences,” a Hindu leader said. “When one is hurting, we all hurt,” a Muslim leader said, adding: “We pray for the family of the shooter, the seventh life lost in this tragedy.”

“We stand with you today in solidarity as you wrestle with the strong feelings evoked by last Sunday’s act of terror at your gurdwara in Oak Creek, Wis.,” said the Rev. Scott Sammler-Michael, senior minister of the Accotink Unitarian Universalist Church in Burke.

A priest conducts a formal gurdwara service at the Fairfax Station Sikh temple on Aug. 9. The service includes the singing of hymns and recitations from the Guru Granth Sahib, Sikhism's Holy Scriptures. The book, more than 1,400 pages long, rests on a platform under a gilded canopy.

“Too many in our world claim they know the mind and will of God, but such extravagant assumptions too often lead preachers and politicians to deny the humanity of whole classes of people, be they immigrants, prisoners, Muslims, Sikhs or homosexuals,” Sammler-Michael said, adding that the greatest “sin of all is to claim that God hates…”

David Rohrer, Fairfax County’s police chief, said he hoped one day, “those who hate will stop seeing differences and see what we have common.” 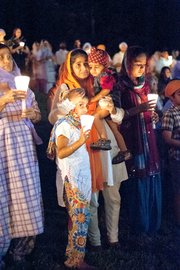 More than 300 people of all faiths gathered for a candlelight vigil at the Sikh temple in Fairfax Station on Thursday, Aug. 9, less than a week after a gunman opened fire at a Sikh temple in Wis., killing six and injuring three.

He praised the actions of Lt. Brian Murphy, the Oak Creek police officer who was hailed as a hero for his selfless actions during the deadly attack on the Wis. Sikh Temple on Aug. 5. Wis. officials said gunman Wade M. Page, a 40-year-old Army veteran and former leader of a white supremacist band, killed six people and injured three, including Murphy, who, despite being shot nine times, urged fellow officers to attend to other victims.

“We salute Lt. Brian Murphy for his actions,” said Rohrer.

Supervisor Pat Herrity (R-Springfield) also remarked on the quick response of Fairfax County police officers, who showed up at the Fairfax Station temple soon after hearing about the rampage in Wis.

“We knew the congregation would be on edge after we heard about the shootings on Sunday," said Captain Joe Hill, commander of the West Springfield District police station. “We showed up here, just to check in, and they were very appreciative of our presence.” 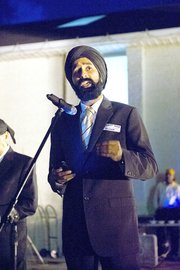 Navdeep Sing, policy advisor for the Sikh American Legal Defense and Education Fund, a national civil rights and educational organization, speaks at an Aug. 9 candlelight vigil at the Sikh temple in Fairfax Station.

NAVDEEP SINGH, policy advisor for the Sikh American Legal Defense and Education Fund, a national civil rights and educational organization, handed out pamphlets on Sikhism, and spoke movingly during the vigil.

“One might say our community should retreat and live in fear,” Singh said, “but Sikhs will keep the doors of the gurdwaras open.” Singh, who grew up as a member of the Fairfax Station temple, said there has been an outpouring of support for Sikhs nationwide, who have been showered with flowers, good wishes and hundreds of thousands of dollars in donations since the killings in Wis.

“Our community has come together,” Singh said. “It was not just an attack on a house of faith; this was an attack on America and America’s values. This does not shake our faith and tolerance.”

Julie Knott of Burke, a member of the Accotink Unitarian congregation, said she attended the vigil to show support “for our neighbors. Our church is just a mile away. We stand for many of the same values, and we are deeply saddened by this attack…”

After the vigil, all visitors were invited into the Langar Hall (a community kitchen) for a vegetarian meal.