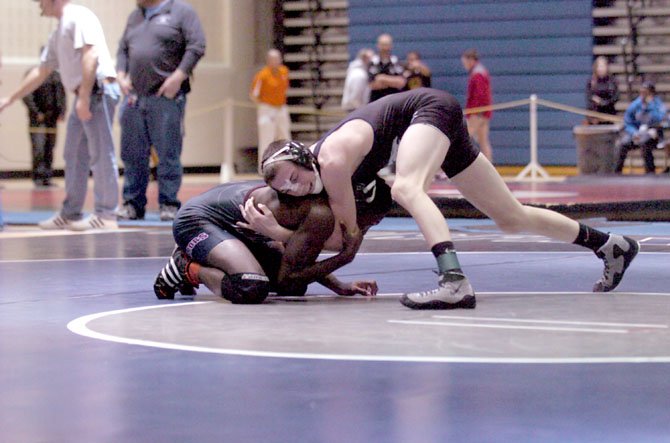 Fairfax — With the bridge of his nose bloodied and bandaged, South County wrestler Hunter Manley found himself locked in a 3-3 tie in the third period of a tournament championship match on Dec. 8.

Last season, Manley won the Northern Region title in the 106-pound weight class. Now a junior, Manley was competing in the 120-pound division at the 2012 FinalAutoPrice.com NOVA Classic at Fairfax High School. While moving up two weight classes presents challenges, Manley managed to take care of business during this event.

“It was a little bit of a challenge,” Manley said of moving up two weight classes. “Luckily, I jumped up pretty early right after the season last year, so I had enough time to regain my strength up to that point. The kids are strong, but I feel fine, technically. You can’t muscle people around when you make that kind of jump, you have to really rely on technical skills. I can’t really force moves.”

What led to the two-weight-class jump?

Renzi, a two-time Patriot District champion, said he had a goal of 40 takedowns during the NOVA Classic, but finished with 39.

“You’ve got to trust yourself and when you see it open up, you’ve just got to go for it,” O’Connor said. “If you wrestle tentatively, you’re not going to get it anyway.”

“Now that he’s gone, I know that I have the opportunity to win districts,” Jacobson said. “He was my main target. For regionals, I’ve got Sean Haskett, [Robinson’s] Dallas Smith [and Westfield’s] Derek Arnold. But after beating Sean, I know I can take that next step to get to Dallas Smith. If I stay strong all season, keep on working hard, stay healthy, I know I can get him.”

West Springfield’s Austin Flanagan won the 220-pound title with a 4-3 decision against Mount Vernon’s Nate Haro. Flanagan finished seventh at the NOVA Classic last year, his first year in the United States after living in Italy.

“[Winning] definitely helps my confidence,” Flanagan said. “Last year, I came in seventh and even that—coming [in] seventh out of 32—made me boost for the early part of the season. . . . Coming in first this year really means a lot to me.”