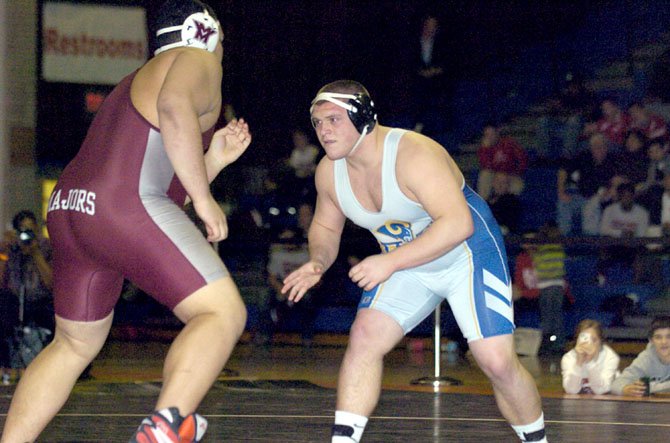 Alexandria — Seven Robinson grapplers wound up on the losing end of their finals matches on Feb. 9, yet walked away a winner from the Northern Region wrestling meet at Hayfield Secondary School.

The Robinson wrestling team sent nine grapplers to the finals, but only two --- Jack Bass (152) and Jake Pinkston (285) --- came away with region titles. However, the Rams’ depth helped them capture the team championship with a score of 232. Westfield finished runner up with a total of 224, followed by Mount Vernon (155.5) and Lake Braddock (146).

Renzi dedicated his performance to his grandfather, Eugene, who died five years ago to the day. Renzi said he has high hopes for the state tournament and was pleased with Lake Braddock capturing three region championships.

"I’ve taken fifth [three years in a row] at states," Renzi said. "I plan to win it all. Always shoot for the stars. … The Haskett brothers, they’re great. I work with them, trying to make them better every day. It’s awesome to see both brothers win it today."