The Back Room really is a back room.

Vienna — To its list of social events, Vienna has now added "comedy club." Called The Back Room, and housed in a back room of Marco Polo Restaurant on Maple Avenue Friday nights, the venue opened in mid-December. Owner and talent scout Andy Sanderson, who grew up in Vienna, wanted a place where stand-up comics could refine their material and get public exposure. The club is open mic and the comics are given free rein with their material. 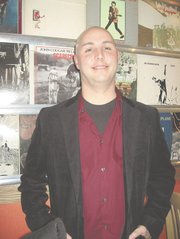 Former Vienna resident Andrew Sanderson returned to the town he grew up in to open a comedy club, "The Back Room."

"I wanted to offer local comics an old-style New York comedy room," said Sanderson. Comics sign up in advance and work without pay. "We’re a melting pot of comics," said Sanderson. "Some pro, some amateur. The pros come to try out new material." Sanderson said he hits up venues all over the area looking for new talent. "The main thing is that they’ve got to be entertaining. I love comics who put me in stitches."

On a recent Friday night, the comedy content was mostly X-rated, with a gentler approach coming from the two female comics. Don’t expect NBC "Last Comic Standing"-type humor. Comics at The Back Room used some pretty graphic sexual descriptions and customers should be aware that content is not suitable for everyone. Vienna comic Adam Belcher, a regular on the Northern Virginia comedy circuit, hosts.

Sanderson moved to Vienna when he was five years old, graduating from James Madison High School in 1989. When he was scouting locations for his comedy club, the place he grew up in seemed like a natural.

During 2011, Sanderson booked music artists and comics at 1st Stage Theatre at Tysons Corner on occasional nights the theatre was dark. Josh Blue, voted as "Last Comic Standing" on the reality show of the same name, drew more than 360 paid guests over two nights when he performed at that venue last March.

Currently, Sanderson is in negotiations for two additional rooms. In Tysons Corner, one room is planned as a local "pub," while the other room, a ticketed venue, will feature national musical artists and comics. Accessibility and free parking are high on Sanderson’s list of requirements and he is targeting a venue that is located at one of Tysons’ new Metro stations.

The Back Room, operating on Friday nights, has a cover charge of $5 and beer and drinks are available for sale. Marco Polo restaurant waitstaff serve The Back Room. The comedy club starts at 8 p.m. and runs until the last comic closes, usually around 10 p.m. The Back Room is reached from the front of Marco Polo Restaurant, 245 Maple Ave. West.

THE SON of a cop, Sanderson inherited a disposition for law enforcement, but he didn’t want to do traditional police work. What he found was a career with the Fairfax County Police Department Animal Services division, working out of the McLean and Reston districts. Although he works 12-hour shifts, he makes time to nurture his entrepreneurial spirit.

"I’m just a guy who puts comics in a room, gives you something to laugh at," said Sanderson. "That’s pretty much it. I try to create something simple and fun without a high price tag."