Burke: A History of Pies, Racing and Summer Fun
Votes

Burke: A History of Pies, Racing and Summer Fun 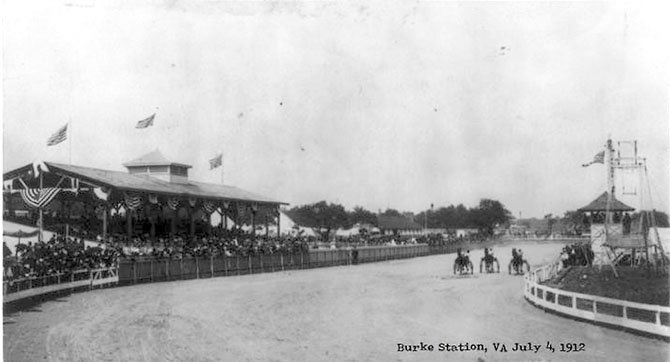 A photo of the Burke Race Track in the 1920s. Mike Copperthite gave a presentation on his famous ancestor to the Burke Historical Society on Sunday, Jan. 29. Photo Contributed

Burke — When Mike Copperthite dug into his family’s history last year, he struck pies. Fifty thousand of them.

His quest for information about his great-great grandfather - Henry Clay Copperthite - led him down a path that included a rags-to-riches story, connections to President Theodore Roosevelt, a pie empire and an era when Burke was a resort town for Washingtonians. 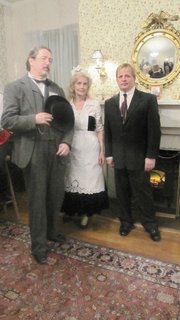 Col. Silas Burke (aka Burke Historic Society president Jon Vrana), Suzi Fowler-Neal, whose family owns the Silas Burke House, and Mike Copperthite stand in the parlor of the historic home. Copperthite gave a presentation on his great-great-grandfather, Henry, who owned the mansion in the early 1900s.

On Sunday, Jan. 29, Copperthite spoke to a packed house during the Burke Historical Society meeting about his family’s patriarch, who purchased the Silas Burke House in 1899 as a summer getaway from his Georgetown home. He and his wife, Johanna, had moved to Georgetown in 1885 and founded the Connecticut Pie Company.

"Henry was the largest non-governmental employer in Washington, DC, and he was called the ‘King of Pie,’" Copperthite said. "By 1914, Henry and Johanna’s company was churning out 50,000 pies a day - about 8,000 pies an hour." 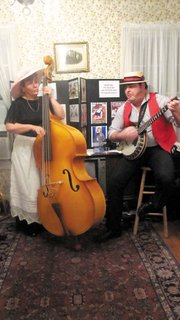 He told the crowd that Henry was also instrumental in transforming Burke from a sleepy rural town to a thriving resort destination. "Henry built the Burke Station Racetrack on land that is now part of the Burke Nursery, four hotels, stables for 75 horses and grandstands to seat more than 2,000 people. His stables housed the horses of President McKinley and Vice President Theodore Roosevelt."

Copperthite said Burke soon became a summer resort for people from all walks of life who traveled from Union Station to see horse races, fairs, exhibition boxing and baseball games.

"Henry was an entrepreneur and a sportsman, an uncommon man who never forgot where he came from," Copperthite said. "He was at the front of so many causes and issues of his day. He was a tireless worker, and he was a sportsman at the top of the top sport of his time." Henry Clay Copperthite died in the home of his daughter in Clarendon in 1925.

"This was the most fascinating presentation," said longtime Burke resident Alyce Chessnoe. "I learned so much about Burke history tonight. This was, pardon the pun, a piece of the pie that we didn’t know about."

So many people wanted to hear Copperthite’s presentation that the event was held in two sessions to accommodate all the guests, who gathered at the historic Silas Burke House, now owned by Terry and Suzi Fowler Neal.

While it’s common knowledge that Burke is named for Silas Burke, the 19th century farmer, merchant, and local politician who built the Burke mansion, many BHS members said they didn’t know that, in 1903, Henry Copperthite changed the name of the post office from Burke's Station to "Burke," or that Henry installed the first phones in Burke. 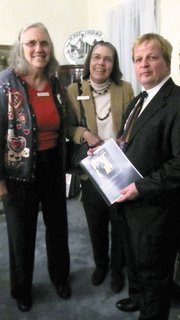 Copperthite said he learned that Henry’s phone number was W29, and he speculated that the number was significant because 29 was how many flavors of pies the company produced.

Copperthite said that the Horatio Alger aspect of his grandfather’s story most impressed him.

"Think about it. In 1885 no Copperthite lived in the area. By 1900, 45 Cooperthites lived here and 15 of us went off to fight in WWI, and only seven came back…Henry came from indentured servants, and at age 14 he joined the Civil war because he was against slavery," Copperthite said. "I cried when the archivist this past summer showed me the Christening book from St. John’s Anglican Church on Antigua where Henry was christened on Christmas day 1846. Most likely no one had seen that page since it was written by hand so long ago."

Copperthite, who lives with his wife and daughter in Falls Church, said that the information he’s learned in the past year may eventually become a book. "But we are primarily doing it for our family so they know," he said.

After the presentation, guests were treated to, what else, pies. Keely Copperthite and Emily Partigan, both students at Longfellow Middle School, served slices of pie to guests topped with whipped cream. Doug Everton and Nancy Lisa of the Hot Buttered Nuggets entertained guests with music from the 1920s.

"This was very entertaining," said BHS member Robert Bollig of Fairfax Station. " I learned so much history tonight."

During the business portion of the meeting, Jon Vrana, president of the BHS, said membership more than tripled in 2011, from 35 members to 113, with more joining on Sunday evening.