2,000-person grandstand once stood in Burke. 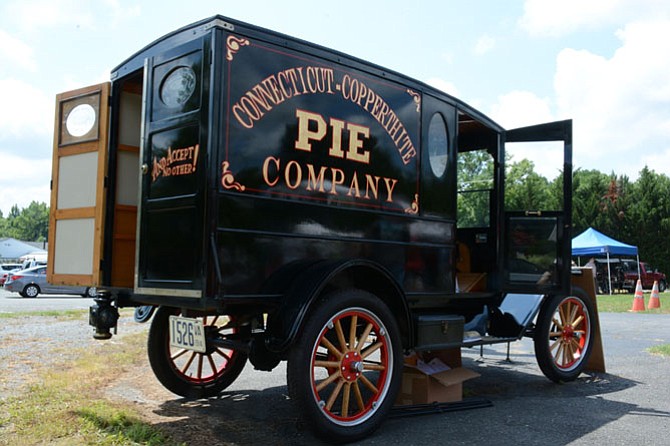 The morning of the marker unveiling, Mike Copperthite (who was joined by seven generations of the Copperthite family) served 600 of the famous pies out of the back of an original 1914 Ford Model T pie delivery truck. Photo by Tim Peterson.

More than 100 years since Copperthite Race Track opened in Burke, harnessed race horses once again trotted back and forth on the same grounds, now inhabited by the Burke Nursery and Garden Centre.

The race track, including a 2,000-person grandstand, was built by local entrepreneur Henry Copperthite. Elected officials, community members and seven generations of the Copperthite family came together July 31 for a celebration around unveiling of a Fairfax County historical marker for the track.

“In 1897, Henry Copperthite purchased the Silas Burke Farm and constructed nearby one of Virginia’s finest harness racing facilities,” the marker reads. “The racetrack, whose grandstand sat 2,000, opened on July 4, 1908. Horse, harness, motorcycle and car races were featured at the track. Special trains from the Washington, D.C. area brought visitors to Burke, where they could stay at the new hotel. Families enjoyed agricultural fairs, Fort Myer cavalry drills, balloon ascensions, baseball games, athletic contests and dances at a pavilion. For almost a decade, thousands were entertained at the Copperthite racetrack and fairground.”

Copperthite’s great great grandson Mike Copperthite lives in McLean and is proprietor of the family business Henry started, the Connecticut Copperthite Pie Baking Company of Georgetown. Mike Copperthite has spent the last four years working on getting the marker erected.

The Copperthite pie business was once the largest of its time, Mike Copperthite said, with 15,000 employees putting out 50,000 pies a day.

Debbie Robinson, chair of the historical marker committee, said in order for their to be a marker, it was important for Mike Copperthite and his supporters do extensive research of primary source documents and prove all the facts. The marker text, as a result, is heavily footnoted, drawing from period newspapers including “The Washington Post,” “The Sunday Star” and “The Alexandria Gazette.”

“We appreciate what happened in the past, the people who came before us,” Robinson said, “and what they did for our communities, like Henry Copperthite.”

In addition to the racetrack and grandstand, Copperthite built a hotel, sidewalks and a grocery store.

The morning of the marker unveiling, Mike Copperthite (who was joined by seven generations of the Copperthite family) served 600 of the famous pies out of the back of an original 1914 Ford Model T pie delivery truck.

The vintage vehicle was joined by other period Fords of the Nation’s Capital Model T Ford Club, which was celebrating its 50th anniversary. After appearing in Burke, the club members drove to the Fairfax Station Railroad Museum for another viewing.

To give spectators a feel of the harness horse-racing atmosphere, a horse and rider took two eighth of a mile laps on the grass along Burke Road. The running is being submitted for consideration as a record for the longest time between races at the same track.

Del. Eileen Filler-Corn (D-41), who represents the Burke area in the Virginia General Assembly, said she’s always interested in learning more about history and was delighted to “share this momentous occasion.”

Fairfax County Board of Supervisors Chairman Sharon Bulova said celebrating history in this way helps us “understand what we are,” and gives “a better idea of where we want to go, what we want to be.”

Making light of the ongoing work of regulating food trucks in Fairfax County, Bulova referenced the 1914 Ford pie delivery truck. “What goes around comes around,” she said.

Jon Vrana, president of the Burke Historical Society, commented that in this area, there tends to be more focus on the Civil War-era history rather than turn of the century.

“The world was changing,” Vrana said. “This shows this area has rich history across the spectrum. It extends the understanding of the variety and diverse history we have in Fairfax.”