Centreville — With the sluggish economy at the forefront of voters’ minds this year, former Democratic Gov. Tim Kaine hopes to put fiscal issues at the top of his campaign to fill the seat vacated by Democratic U.S. Sen. Jim Webb. In an interview on Thursday, Jan. 19, Kaine said he hopes to promote a "talent economy" in Washington. It’s a reality the former governor says has become evident in the last few decades, when Virginia moved from being one of the lowest median income states to being one of the wealthiest. 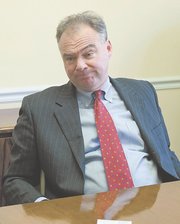 "How did Virginia move from sluggish economy to strong economy?" asked Kaine. "I would argue that the main thing that moved it for us was that we decided to become a talent economy."

For Kaine, the key to pursing the talent economy and fixing the broken economy is education reform. One example would be creating accountability reports for every state’s public education system, an effort he said would create a sense of competition between the states that would improve education nationwide. He would also invest more money in career and technical education, and he’s critical of the Obama administration for failing to take action in this area. Kaine’s vision of the talent economy also expands beyond education reform, encompassing a broad range of economic policy including everything from workforce development to comprehensive immigration reform. And he hopes to land a spot on the Health, Education, Labor and Pensions Committee to push his talent agenda.

KAINE’S CAMPAIGN is aimed solidly at budget issues and the economy, hoping to capitalize on lingering uncertainty from the global economic crisis and persistently high unemployment figures. Kaine says balancing the budget will involve tax increases and budget cuts. Kaine said he would let the massive tax cuts created by former President George W. Bush expire at the top end. Specifically, Kaine said, he would propose eliminating the Bush tax cuts for those who make more than $500,000.

"Higher income earners are job creators," said David Logan, economist with the conservative Tax Foundation. "So Kaine is talking about taking money from people who are most likely to invest in the economy."

On the issue of cutting the budget, Kaine, trumpeting his time as governor, said he had a better record than Allen. When asked what kinds of cuts he would make in Washington, Kaine said he wants to allow the federal government to negotiate with pharmaceutical companies to reduce the price of drugs covered by Medicare. And he anticipates cost savings associated with a smaller military as the wars in Iraq and Afghanistan draw down. He would also like to close some overseas bases, although he couldn’t say which ones or how much money would be saved. Critics say it’s a flawed agenda.

"With unemployment stuck above 8 percent for months on end and high fuel prices continuing to hurt Virginia families and businesses, we need a voice in Washington that will represent Virginia values," said Del. Ron Villanueva (R-21). "George Allen will fight every day to unleash our energy resources for jobs and security and that’s why we need him in the U.S. Senate."

KAINE’S OPPONENTS are also focused on the economy, although they’re attacking the former governor from the right. Last week, Kaine’s decision to back President Barack Obama’s decision to reject an application to build the Keystone XL oil pipeline brought criticism from former Republican Gov. George Allen and Del. Bob Marshall (R-13). Both campaigns hoped to use the issue to tie Kaine to Obama and portray the Democratic Party as irresponsible.

"The Keystone pipeline could produce thousands of American jobs, reduce American dollars going to regimes with little sympathy for western democratic governments and increase America’s energy security," said Marshall. "What is the real reason Tim Kaine and Barack Obama are in a rush to avoid constructing this pipeline?"

Kaine rejected criticism from Allen supporter Del. Terry Kilgore (R-1) that his support of the Obama’s decision on the pipeline shows that he is a "reflex liberal," citing his elimination of the estate tax and Forbes Magazine description of Virginia as the most business friendly state all four years he was governor. Kaine also said that the Keystone decision needed to be thoroughly analyzed, and he criticized Congress for trying to force a decision in a short period of time and tying it to the payroll tax extension. He was also critical of Kilgore and Allen for pushing the pipeline when Nebraska was opposed to it.

"I’m not going to be a senator telling Nebraska, ‘You’ve got to have this whether you like it or not,’" said Kaine. "I frankly think in terms of energy policy that there are a lot more immediate and likely successful strategies."

ASIDE FROM TRYING to help the sluggish economy by pushing a talent economy, Kaine hopes to find common ground in the Senate, which he calls a "broken institution." If elected, Kaine said he wants to find a Republican senator elected at the same time and join the bipartisan and moderate Gang of Six, potentially making it a Gang of Eight. By casting himself in this role, Kaine hopes to find what he calls "common ground" with Republicans rather than holding up nominations such as the administrator for the Centers for Medicare and Medicaid, which has been vacant since 2006.

"Under both presidents under both parties, the advice and consent process in the Senate has fallen apart because they utilize secret holds and cloture," he said. "But more than that, they just don’t work together."

He acknowledged that a freshman senator wouldn’t be able to do much about secret holds and cloture, although he said something had to be done about excessive partisanship and an unwillingness to work together. Because of the dynamics of the House of Representatives, he said, that would not be the place where the culture of Washington begins to change. The Senate, on the other hand, operates more on personal relationships, and so it would be a more logical place to begin increasing bipartisanship in Washington.

"More senators want to work together, but their chafing under each of their respective sets of leadership," he said. "The president says this, that we’re four or five votes away from a mutiny in the Senate, and that would be a good thing."