Former governor goes on the offensive against organized labor. 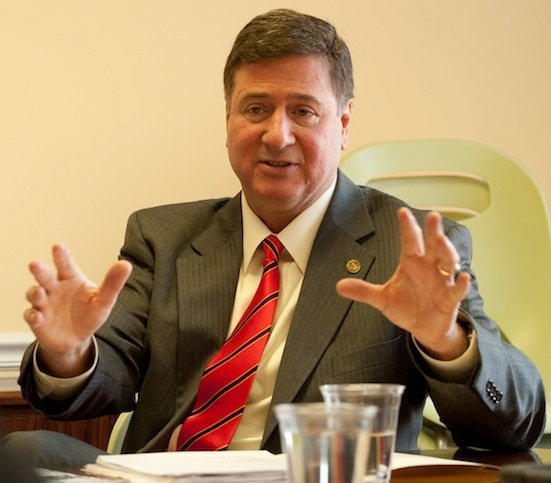 Former governor and United States Senator George Allen visits Connection Newspapers as part of his Republican campaign to return to the Senate seat he lost in 2006.

Hoping to capitalize on anti-union sentiment in Virginia this year, Republican George Allen is giving labor issues a starring role in his bid to recapture the Senate seat he lost to Jim Webb in 2006. In a meeting with Connection Newspapers reporters and editors, Allen proposed a series of specific measures to undercut the power of unions. The agenda would undercut the power of the National Labor Relations Board, prohibit mandatory labor agreements on federal projects and ensure secret ballots before a labor union can be created.

"Unions are a big part of the Democrats’ political operation," said Allen. "There’s no secret about that."

Allen says the series of proposals were inspired by the National Labor Relations Board’s lawsuit against airline manufacturer Boeing, which sought to punish the company for locating a new plant in South Carolina in retaliation for strikes by unionized workers at its existing facility in Washington state. The lawsuit was dropped last month, but Allen and other Republicans are now hoping to capitalize on the issue on the campaign trail.

"This is an issue that hits a sweet spot for Republican voters," said Kyle Kondik, political analyst with the University of Virginia Center for Politics. "So it certainly helps him in the primary against Jamie Radtke. It remains to be seen whether it’s something that would appeal to voters in the general election against Tim Kaine."

ALLEN SAYS THE freedom to work is "under assault," and repeatedly used the lawsuit against Boeing as a reason for the federal government to take decisive action. But Allen’s agenda is broader than simply undercutting the power of the National Labor Relations Board. He would also like to amend the National Labor Relations Act to prevent workers from being compelled to pay union dues or fees to get or keep a job, essentially expanding Virginia’s Right To Work law nationwide. He would also work to guarantee that workers have the opportunity to cast secret ballots before a union can be organized.

"None of George Allen’s proposals would help workers in Virginia like me in any way," said Karen Conchar, Fairfax County employee and member of Local 5 Service Employees International Union. "Taking away rights at the workplace doesn’t help the middle class put food on the table or pay the mortgage, and it doesn’t help businesses create good jobs."

As governor in the 1990s, Allen says he saw firsthand how the commonwealth’s Right to Work Law helped encourage investment and expansion of business in Virginia. If elected to the Senate, he says, he wants to advance an agenda to undercut the power of unions in a way that would held businesses create jobs, save taxpayers money and protect the liberty of non-unionized workers. One of his goals would be to repeal the Davis-Bacon wage laws that he says diminish competition and inflate costs to taxpayers for construction when the federal government is involved. Ultimately, Allen said, he’s hoping that voters send a mandate for action.

"The reality is that it matters who the president is," said Allen. "President Bush didn’t allow project labor agreements. This president is all for them."

ONE OF ALLEN’S proposals would have particular resonance in Northern Virginia: It would prohibit the federal government from entering into mandatory project labor agreements, a collective bargaining agreement that establishes terms and conditions for a specific construction project. These are frequently large-scale infrastructure projects, such as bridges or Metro expansion to Dulles International Airport. Allen says that taxpayers would get more bang for their buck if the federal government was prohibited from engaging in collective bargaining on these projects.

"The reason you don’t want to have these is that they increase the cost of a project, on average by 22 percent," said Allen. "You have less competitive bidding."

Union groups dispute this notion, questioning if taxpayers would really save money by hiring low-wage workers. Supporters of project labor agreements say unionized workers are paid more money because they produce better work. As a result, supporters say, they also create infrastructure that is less likely to break down or fail — sometimes with catastrophic consequences.

"Sometimes what you see is that without project labor agreements you end up with a more exploitable workforce," said Julie Hunter, spokeswoman for the Virginia AFL-CIO. "These are workers that tend to not have the same training that the union workforce has."

ALLEN’S OPPONENTS don’t have much to say about his specific proposals. Campaign officials for Jamie Radke, the Tea Party candidate hoping to challenge him in the Republican primary, declined to respond to multiple requests for an interview. Her campaign website says she would oppose laws that would require a worker’s secret ballot in union elections. The site also says she would support Virginia’s Right To Work Law and oppose collective bargaining between government entities and public employee organizations and unions.

If he’s successful against Radke, Allen will face former Democratic Gov. Tim Kaine — pitting two former governors against each other in a Senate race. Like Allen, Kaine also supports Virginia’s right-to-work law. When contacted about Allen’s labor proposals, the Kaine campaign issued a statement saying that the former Democratic governor upheld the law as governor and will continue to support states’ rights to establish their own rules on this issue as senator. The campaign did not respond to a request to address Allen’s specific proposals.

"The answer to our economic challenges is not tinkering with workplace rules, as George Allen suggests," said communications director Brandi Hoffine in a written statement. "The real answer is building a high-talent economy by investing in education and workforce development."

ALLEN’S SUITE OF PROPOSALS will pit traditional political opponents against each other, labor unions and their Democratic allies on one side and business leaders and allies in the Republican party on the other. What’s different about this election is the recession, with the unemployment rate in Virginia currently at 6.2 percent. Another difference with this election cycle is the growing Occupy movement, which seeks to cast a spotlight on the same wealth inequality that gave rise to the original labor movement in the late 19th century. Now, Allen says, it’s time to move away from that model and adopt a more free-market approach.

For voters in Northern Virginia, the stakes are high.

"This artificially increases the costs and it also ends up with less competition so you end up with a higher cost to the taxpayers," said Allen. "If you look at the Metro extension to Dulles, the ones who will ultimately have to pay for these unnecessarily higher costs will be the taxpayers."