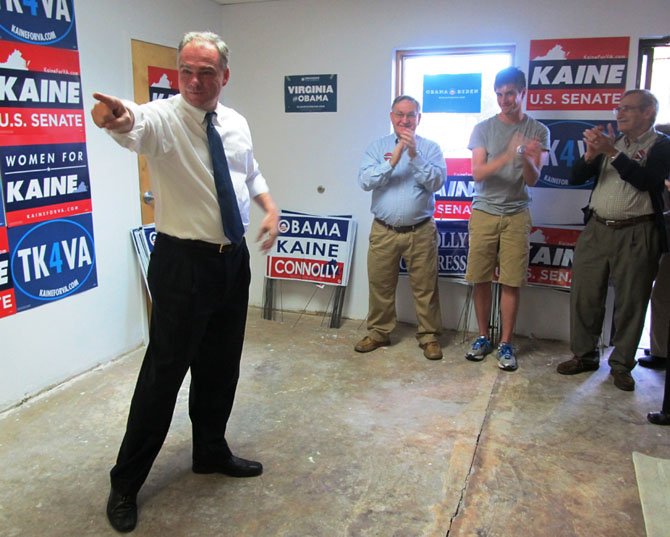 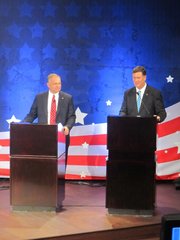 U.S. Senate candidates Tim Kaine and George Allen face off during the Fairfax Chamber debate in McLean on Thursday, Sept. 20.

Mohammed Ashiq, a longtime employee at Luciano’s restaurant in Oakton, was working at the restaurant Sunday when former Democratic Gov. Tim Kaine met with supporters at the Oakton shopping center.

“I’m still pretty much undecided,” Ashiq said, “but I have a 9-year-old daughter and education is an important issue for me.”

Ashiq said he liked what Kaine had to say about increasing access to affordable higher education, but he wanted to hear more from both candidates before making up his mind.

Scott Tanner, who was dropping his daughter off at the center for a birthday party, said he is “leaning slightly in favor of Kaine” over former Republican Senator George Allen, who is vying to win back his seat from retiring Democratic Senator Jim Webb.

In a tight race that could decide which party controls the Senate, Northern Virginia has become the battleground region within the battleground state, and both candidates have spent an increasing amount of time and money courting voters in the region. 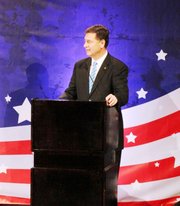 In the past few weeks, Kaine and Allen have crisscrossed Fairfax County almost daily, meeting with voters at business roundtable candidate forums. Last week, campaign momentum was beginning to favor Kaine when two independent polls showed Kaine opening up a significant lead for the first time after 17 months of campaigning.

THE NEXT DAY, the former governors faced off in a highly-anticipated debate at the Capitol One Center in McLean that demonstrated clear differences in their approach to policy and fiscal issues. It was the third of five scheduled debates.

Hosted by the Fairfax Chamber of Commerce and moderated by David Gregory, host of NBC's "Meet the Press," the candidates were more cordial than confrontational. Kaine positioned himself as a bipartisan problem-solver, while Allen portrayed himself as a small-business champion.

The candidates also found areas of agreement: each stressed the need to preserve the home mortgage interest deduction, and both candidates vowed to reduce the nation's deficit and avoid the looming $500 billion in defense cuts scheduled to begin in January.

Several times during the debate, Kaine reiterated his proposal to reduce the federal deficit and avert the automatic cuts—or “sequestration”—through a three-pronged approach.

“We will let the Bush tax cuts expire as planned for people making more than $500,000; we will fix Medicare so we can negotiate to get better prices on prescription drugs; we will let the tax subsidies to the big five oil companies expire," Kaine said.

Allowing tax increases on those earning more than $500,000 a year is compromise, Kaine said, between Democrats who would let the cuts expire on those earning $250,000 or more, and Republicans who want to make the cuts permanent for everyone. 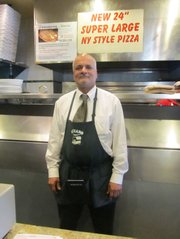 Mohammed Ashiq, a longtime employee at Luciano’s restaurant in Oakton, said he is an “undecided voter.”

Allen repeatedly said he would not entertain any tax increases to keep the government from falling off a “fiscal cliff,” and he stuck to his message that “job creation” would solve many of the nation’s problems.

"As I stated in the beginning, David, the best social program of all is a job." Allen also said he would repeal President Obama’s health care law, and proposed allowing households to choose a flat tax over the existing tax code.

“I want to create more job opportunities. If you want a job, you ought to join the Allen team,” Allen said, adding that he should have the backing of “99 percent of Virginians, anyone who pays an electric bill, drives a car or has a job.” 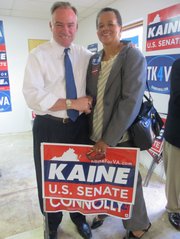 He said his return to the Senate would be about “making sure America is ascending once again and is a land of opportunity once again.”

THE DEBATE was mostly devoid of headline-making news until Gregory asked Kaine if he thought “all Virginians should have to pay some level of federal income tax.”

"I would be open to a proposal that would have some minimum tax level for everyone," Kaine said, "but I do insist, many of the 47 percent that Governor Romney was going after pay a higher percentage of their income in taxes than he does."

Kaine’s statement almost immediately ignited a furor by bloggers, tweeters and news reports of the debate. 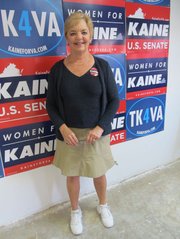 In interviews after the debate, Allan hammered Kaine for the remark, accusing him of “always trying to raise taxes.” In a press release Saturday, the Allen campaign accused Kaine of “doubling down” on the idea of imposing an income tax on all Americans in his TV appearances.

"It shouldn't be news that somebody who wants to go into the Senate is willing to start from a position of openness and dialogue," Kaine said after the debate. "We can't start with non-negotiable."

Kaine added that while many Americans do not pay federal income tax, low-income individuals are subject to many other taxes. “The lie that some perpetrate that poor people don’t pay a lot of taxes is wrong,” he said.

“I kind of chuckled about (the furor),” Kaine said Sunday after meeting with volunteers in Oakton and Manassas. “I’m open to dialogue, and I don’t see how openness is something controversial.”

Del. Mark Keam (D) introduced Kaine to the 70-plus grassroots supporters who assembled in Oakton to hear Kaine as he launched the community canvass. Judy Fisher, a retired Fairfax County teacher, said she was supporting Kaine for several reasons. 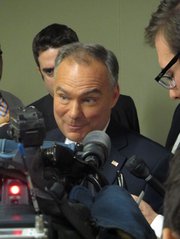 “The health care bill is very important. No, it’s not perfect, but I have a 97-year-old mother, and health care is a big issue for us.” She also said she liked Kaine’s positions on abortion rights, education and other issues.

“I’ve worked at polling places, and there was no reason, no justification to make it tougher for people in Virginia to vote,” she said.

Kaine told supporters that “the most important thing is to find people who know how to work together. [Republicans] would run the ship aground just to get the captain,” Kaine said.

"The differences in this race are very clear," said Kaine. "On the big issues of the day—how we strengthen the economy, how we address the federal budget, and how we break through Washington's partisan gridlock—my opponent and I have a very different record and a very different approach.”