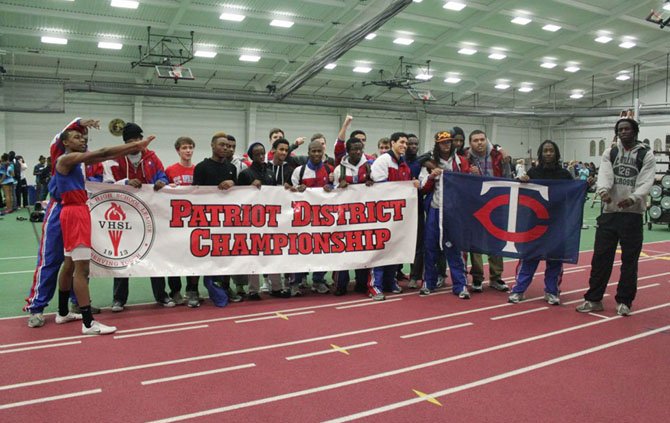 Jonathan Anderson won the shot put title with a throw of 51 feet, 1 inch and was part of a 1-2-4 finish for the Titans in the event. Mohammed Sesay took second (48-5) and Jose Urrutia finished fourth (43-1), each qualifying for regionals.

Kahron Lee won the high jump for the Titans with a personal-best-tying mark of 6 feet, 4 inches, part of a 1-4-5 team finish in the event. Devon Cooper (6-0) placed fourth and Za’Quan Summers (5-10) was fifth.

Anderson and Lee each qualified for states in their respective events in late February.

In girls’ action, T.C. Williams took third with 70.5 points, finishing behind South County (165) and Lake Braddock (89). Ayzha Ward won the shot put title with a throw of 37-10, more than nine feet better than the nearest competitor. Jennifer Zhu placed second in the high jump (4-8) and Sydney Schaedel took second in the pole vault with a state-qualifying mark of 9 feet, 6 inches.

The top-six finishers in each event and the top-three relays earned a trip to regionals, which will be held Feb. 18 at George Mason University. The Titans finished with 28 individual entries and three relays qualifying for regionals. 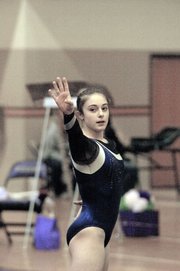 Girard finished sixth in the all-around competition with a total of 34.875. Lake Braddock’s Caitlin Liberatore won the all-around with a 36.6, followed by Lee’s Leah Michetti (36.15) and Katie Stewart

The world’s third largest indoor rowing competition took place in Alexandria this past Saturday, with the holding of the MidAtlantic Erg Sprints at T.C. Williams High School on Feb. 4.

This is the 27th year Alexandria has hosted the competition, which featured the largest turnout in its history. In total, 1,572 athletes from 56 high schools, 38 rowing clubs, 10 colleges, and six fitness clubs competed in this year's event, rowing 3,719,076 meters — or 2,310.9 miles — along the way. The event was organized and staffed by 210 volunteers — 160 adults and 50 students.

The event also featured Wounded Warriors and other adaptive rowers from Athletes Without Limits, the U.S. Paralympics Military Program, and the Capital Rowing Club. The MidAtlantic Erg Sprints was one of the first indoor rowing competitions in the United States to feature adaptive rowing events, which are designed for individuals with disabilities.

And, in a one-of-a-kind competition, John Ryan of Crownsville, Md. not only rowed a complete marathon — 42,195 meters, or 26.2 miles — but did so with the fastest time posted so far in the U.S. this year: 2:45:56.5. For complete results of the 27th MidAtlantic Erg Sprints, visit http://www.ergsprints.com/results/.

The MidAtlantic Erg Sprints were first held in Alexandria in January 1986. The event is sponsored by the Alexandria Crew Boosters.