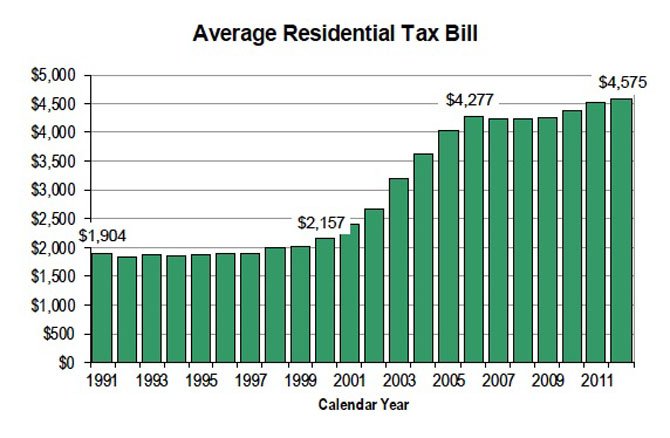 Residential property tax bills are at an all-time high. Alexandria Office of Management and Budget

— $1 million in DASH bus expansions, including a new crosstown AT9 route between Mark Center and Potomac Yard and to increase peak service frequency from 30 minutes to 15 minutes on the AT6 route from King Street Metro to Northern Virginia Community College.

— $309,000 for a new Office of Project Implementation to facilitate implementation of high-priority capital projects, including the Waterfront Plan, Potomac Yard and Landmark Mall.

— $106,000 for a new emergency management planner that can assist in coordinating the city’s response to terrorist attacks or natural disasters.

— $100,000 for the Alexandria Convention and Visitors Association to launch a destination advertising campaign encouraging overnight stays in the city.

— $25,000 for an ethics initiative aimed at reducing the potential for incidents of employee malfeasance, created as a response to several cases of embezzlement.

— $83,000 reduction in advertising budget for the Alexandria Economic Development Partnership to help promote the city to existing and prospective business audiences.

— $17,000 reduction in consulting services of outside experts provided to Alexandria small business owners through the Small Business Development Center.

— $56,000 reduction in rodent abatement, which will limit proactive baiting to Old Town Alexandria and near the Potomac River.

— $46,000 reduction from eliminating a vacant nurse aid position at the Teen Wellness Center.

Alexandria Office of Management and Budget

Where the city gets its money.

With two months under his belt as the city’s new chief executive, City Manager Rashad Young proposed his first budget to City Council members on Valentine’s Day. The $585.6 million proposal is a 3.3 percent increase from last year’s budget, pumping an additional $18.7 million into the annual budget. The city manager’s suggested budget does not raise the tax rate. But rising property tax values mean the average property taxpayer will pay $52 more than last year — a 1.2 percent increase.

The budget includes about $1.4 million of expanded services. New spending items include $100,000 for a new advertising campaign from the Alexandria Convention and Visitors Association, $106,000 for a new emergency planner and a new home-based youth therapist to keep troubled youth in the community rather than shipping them out of the city. It also includes $6.8 million in expenditure reductions. Cuts include $180,000 in reduced service for DASH buses, a $50,000 reduction in rodent abatement and $37,000 for elimination of an early childhood social worker. Young said that he struggled the most with cuts to the Department of Children, Youth and Families.

“Those were hard decisions to make,” said Young, who was formerly city manager of Greensboro, N.C. “Human nature is that you really don’t want to make reductions there because you see the value of those kinds of programs, but to have a balanced budget you’ve got to create those trade-offs.”

YOUNG’S PROPOSAL represents the official beginning of the budget season, which includes two public hearings and eight work sessions culminating in a final adoption on May 7. The proposal meets the guidance set by council members last year, which asked the new city manager to refrain from raising the tax rate and increase the funding for the school system and public safety at the same rate as the overall revenue growth.

“It’s not dead on arrival, unlike the president’s budget,” observed Mayor Bill Euille. “So you are doing very good.”

In response to a series of city employees who have been charged with embezzlement, Young has created a new ethics initiative. The initiative includes $22,000 in ethics awareness training and $3,000 to create a third-party anonymous hotline to report suspicious activity. City officials described the initiative as a first step in ensuring a culture of ethics throughout the city.

“I commend you for bringing that forward,” Councilman Frank Fannon told Young during Tuesday night’s meeting. “In every organization you have great employees and then you have the bottom of the barrel.”

SOME OF THE BIG-TICKET new spending items include $1 million for DASH bus expansion, which will create a new crosstown route and increase peak frequencies. The expansion of service is paid for by a new dedicated source of funding for transportation, which was created last year when City Council members rejected an add-on tax and instead carved out 2.2 cents of the tax rate for transportation projects. One new spending item that received immediate praise from council members Tuesday night was a $309,000 initiative to create a new Office of Project Implementation.

“Our plans are great, but if we’re not using them we might as well use them to prop open the door to City Hall,” said Vice Mayor Kerry Donley. “This is perhaps one of the biggest initiatives you’ve put forward here.”

One budget proposal that wasn’t as popular with council members Tuesday night was a pilot program to automate parking garages. The plan would make three parking garages fully automated, reducing the number of parking attendants accounted for in the parking management contract. Eventually, Young said, the program would save money by reducing the need for employees. Councilwoman Del Pepper said she was concerned about a lack of security in the garages if computers replace the attendants.

“Those attendant provide an eye on what’s happening,” said Pepper. “I think $33,000 is hardly worth that.”

Councilwoman Alicia Hughes agreed with that assessment, especially for the parking garage under Market Square.

“Things have happened in this garage,” said Hughes, adding that her car was keyed while she was in City Hall. “I think it would be a problem if we were to do that.”

ONE REDUCTION that is likely to become the topic of discussion is a $36,000 cut to the city’s annual birthday celebration. Instead of hiring the Alexandria Symphony to perform, which is usually what happens, Young suggested a military band or local band might perform. The symphony might be able to perform if a donor was identified to pay for the performance.

“So you’re not messing with the cupcakes,” asked Hughes, referring to the miniature birthday cakes available during the city’s annual celebration.

“I’m not sure what the cupcakes are,” Young responded.