Richmond’s action said to compound economy’s effect on those in need. 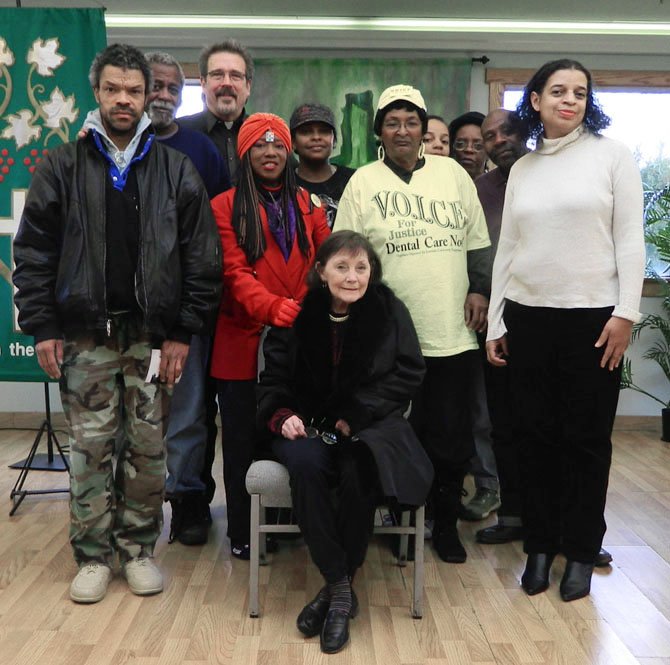 Mount Vernon — Eager to meet their state legislators and see them in action at the General Assembly, 25 people from Rising Hope Mission which serves the homeless and needy along the Route 1 corridor journeyed Feb. 2 to Richmond in a bus paid for by Del. Scott Surovell. 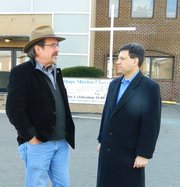 Del. Scott Surovell, at Rising Hope with the Rev. Keary Kincannon on Saturday, said a slew of conservative initiatives are undercutting the poor.

Many of the riders were once homeless, and some still are. The occasion was United Methodist Day.

“It’s something that United Methodists have been doing for 25 years,” said Rising Hope’s pastor, the Rev. Keary Kincannon. “They express their concerns about where public policy crosses into issues that are important to their faith. It was helpful for us to make sure that Richmond understands that Fairfax County is not a monolithic wealthy community. We have strong pockets of poverty.”

But at the capital these are dismal days for Virginia’s poor, according to Surovell and state Sen. Toddy Puller. Both are newly reelected Democrats returning to a General Assembly now dominated by the GOP under the leadership of a Republican governor. Surovell said by phone Feb. 9 that a slew of conservative initiatives are undercutting the poor.

“Many of us would say that there has been a war on the needy,” he said.

Heading the list laid out by Surovell are Gov. McDonnell’s proposed regulations limiting childcare subsidies to five years per family, regardless of the number of children a family might have.

“I had a bill to prohibit that,” said the delegate. “It was killed in committee.”

Then there are the voting bills. “I fought all of the voting bills which have a disproportionate impact on the poor,” he said. Formerly if a voter lacked identification, an affidavit was signed and the person could vote. If the person lied, it was a felony.

The new law requires instead a provisional ballot counted the day after the election only after the voter has successfully presented their case as to why they’re entitled to vote.

“These people are typically elderly, poor, disabled or somebody who simply lost their license or had it taken in a court proceeding,” he said, noting that studies have shown that about 11 percent of the population does not have identification.

“People who do not have licenses are also not very likely to be able to afford transportation to the government center to defend their vote, assuming they’re not working. That bill, I think, disproportionately attacks the poor and lower income people.”

Furthermore, no one is allowed to speak on behalf of the voter unless it’s a hired lawyer, he said. Formerly volunteers from the parties could help.

Then there was legislation requiring drug tests for people receiving Temporary Assistance to Needy Families. “I think it’s a mean-spirited bill,” said Puller. “They just assume that if they’re on welfare they must be into drugs. There’s no reason to assume that.”

Surovell also cited the governor’s proposing “some pretty massive” cuts to Medicaid. “Medicaid is health care for the poor. Right now there is only one doctor on Route 1 that accepts Medicaid, and he has no specialists to refer anyone to within a hundred miles of his office. Cutting doctor reimbursements even further is simply going to mean fewer doctors are going to accept Medicaid.”

A bill was also passed, he said, to prohibit Medicaid from paying for an abortion when a doctor certifies that the fetus will be born with a gross and incapacitating physical or mental deformity. “I think it’s just absolutely cruel,” said Puller.

In addition, if a woman wants an abortion she must now submit to what Surovell called “a medically unnecessary” ultrasound which she must pay for if she doesn’t have insurance. Puller said it was “designed to make it more difficult and intrusive for women who want to get a legal abortion.”

“The folks in charge down here tend to favor corporations over people,” said Surovell. “They tend to be of the opinion that if you’re poor, go fix it yourself. That’s going to be the prevailing feeling here for a while.”

“They must not have any poor people in their district,” said Puller, “or if they do they pay no attention to them.”

At Rising Hope Mission, Kincannon, his staff, and volunteers from churches throughout the area continue caring for an ever-increasing number of people in desperate need. “We’re hoping that Richmond understands that in these tough economic times the poor are the ones who suffer the most and therefore they should be the ones we try to help the most,” he said.