Block by Block, 1940s Concentrated Public Housing in Alexandria is Being Demolished
Votes

Block by Block, 1940s Concentrated Public Housing in Alexandria is Being Demolished

All the units will be replaced, but will scattered-site housing work? 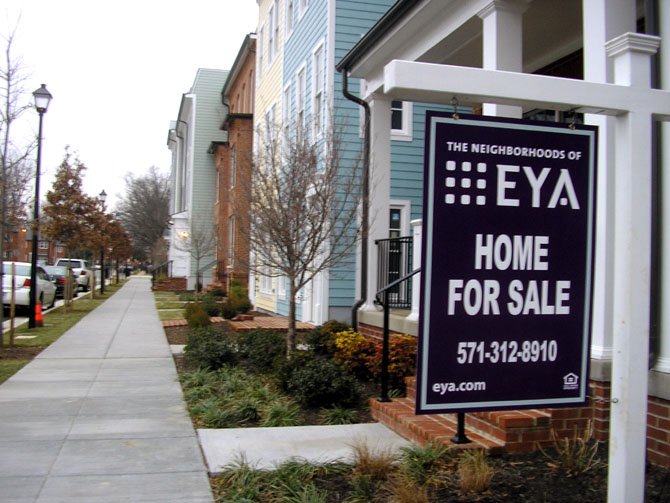 The second phase of Old Town Commons has now been completed and is for sale. Photo by Michael Lee Pope.

ARHA director Roy Priest, left, and former chairman Melvin Miller in one of the market-rate units at Old Town Commons. A demolished block of public housing is visible through the windows.

For more than half a century, the Parker Gray neighborhood has been home to blocks of public housing. Today, the densely packed garden apartments are being demolished. Block by block, row after row, the 1940s-era public housing is vanishing. It’s the end of an era in Alexandria, where city leaders have now fully embraced the concept of “scattered site” public housing — essentially mixing market-rate units and public housing in the same block instead of concentrating poverty into tight blocks of crime and despair.

Because of a city ordinance known as Resolution 830, all of the public-housing units that were once located here are being replaced — a one-for-one ratio city officials are legally bound to follow. About half of them will remain in the neighborhood, which is now known as Old Town Commons. Others will be replaced elsewhere. Although federal officials were once eager to create new housing units after World War II, that era has drawn to a close.

Forty years later, Robinson’s vision is finally becoming reality. But it hasn’t always been a smooth transition. The city’s first large-scale experiment with scattered site housing is in North Old Town, where blocks of public housing previously known as the Berg were replaced with a development known as Chatham Square. Last summer, residents in market-rate housing complained about a growing sense of lawlessness in the neighborhood, charges that prompted cries of racism from many of the public-housing units. Police issued statistics showing minimal crime, but the Alexandria Gazette Packet revealed that he statistics were incorrect and, in many cases, misleading.

“We had some apprehension because we heard about what happened last year,” said Joey Burgess, who moved into Old Town Commons in May 2011. “But we were assured that all the residents will be screened before they can move in.”

“The best part of this is that nobody can ride by here and tell which ones are the public-housing units and which ones aren’t,” said Melvin Miller, former chairman of the Alexandria Redevelopment and Housing Authority.

TWO OF THE FIVE blocks have already been built, and the first block is already fully occupied. Redevelopment plans call for construction to take place over the course of a decade. The development is a joint project of the Alexandria Redevelopment and Housing Authority and Eakin Youngentob for a "mixed-income community" on an 8.49-acre site. The plan calls for removal of 194 old units, replacing them with 379 new units. That includes 134 public-housing units and 159 market-rate townhouses and 86 market-rate multi-family units.

"The economic viability of this project depends principally on two sources of financing: the land value of the market-rate units which in turn is dependent upon their marketability and tax credit financing," wrote EYA cofounder Terry Eakin and ARHA chief executive officer Roy Priest in a letter in support of the development special-use permit.

Because of Resolution 830, 60 public-housing units must be replaced somewhere else in the city. Although the original plan was to move all 60 units to Glebe Park, that number was later reduced to 44 units to provide workforce and market-rate units on the Old Dominion portion of Glebe Park. Last year, City Council members authorized $3 million to purchase condominium units for the remaining 16 units. Since that time, the public-housing authority has purchased 10 condominiums, five townhouses and one single-family house that will now be used as public housing.

“You really wouldn’t be able to accomplish something like this almost anywhere else,” said Priest during a recent tour of Old Town Commons. “We were able to do this because the land values here are so high.”

City officials say the redevelopment of James Bland presents a rare opportunity to reclaim five blocks within the urban fabric that were lost with the introduction of public housing in the 1940s. Though the new structures will be larger than the old garden-apartment style buildings, planning officials say the approved site plan follows the principles of traditional Parker Gray townhouses. Residences face the streets with small front yards and doors that open directly onto the streets to create an active streetscape, although almost all of the existing trees will be eliminated.

"Unfortunately, the proposed redevelopment requires significant underground work for the infrastructure and will necessitate the removal of all the trees," according to a report on the redevelopment by planning officials. "One large 36-inch oak tree located at the rear of St. John Baptist Church will be protected and saved."

LATE LAST YEAR, City Council voted to approve a major change to the part of the redevelopment that faces Patrick Street. Previous plans for the block in question, which faces the east side of Henry Street between First Street and Montgomery Street, called for a large multi-family building that mixed market-rate housing with public housing. After council members approved the original design in 2008, the investors decided they wanted a separate building for the market rate units.

"They’re interested in protecting their investment," explained Miller as he was exiting the council chamber after the vote.

The revised plan approved Saturday has three buildings instead of one, two public-housing facilities without elevators and one separate market-rate building that will be much more high-end. The unscattered-site housing development will need to apply for tax credits in March, so council members were facing a time crunch to approve the amendment on Saturday. But that doesn’t mean they were thrilled with the proposal. Councilman Paul Smedberg said the revised plan watered down the architecture by moving toward something city planners call "warehouse vernacular."

"There’s nothing of interest at all on these buildings," said Smedberg. "I’m sick of always having to compromise on architecture."

Meanwhile, a few blocks east, EYA and ARHA leaders say there’s a lot of interest in what’s happening on the blocks where the James Bland public housing complex was. Recent sales of the market-rate units have exceeded expectations, and the first block is already fully occupied. The second block, which was recently completed is selling now.

“They’re selling like hotcakes,” said Miller, beaming as he took in the view from one of the market-rate units third floor terrace. “Basically, we’re benefiting from bad decisions that were made in the 1940s and 1950s.”