The New Face of Andrew Adkins 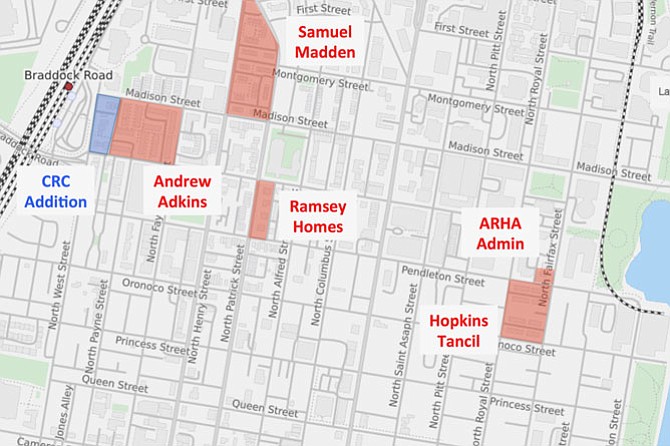 The slated redevelopment of the Andrew Adkins community in Old Town illuminates the complexity and controversy attached to public and publicly assisted housing.

Adkins represents an early stage of a much larger arc of redevelopment, including six properties owned by the Alexandria Redevelopment and Housing Authority (ARHA), the entity that administers HUD subsidies locally. In addition to Adkins, these include Ramsey Homes, Samuel Madden, Hopkins-Tancil Courts, ARHA’s main administrative office, and Cameron Valley — over a quarter of ARHA’s inventory, located mostly in northern Old Town.

ARHA says it is increasingly strapped for cash due to contracting federal dollars. In FY16, for example, ARHA received $3 million in operating subsidy, or 82 percent of its requested budget. That represents a reduction of about one third since FY11 and FY12, the peak years for operating subsidies in the last decade, and a return roughly to FY07 levels. So ARHA has to upgrade its aging inventory through redevelopment in such a way that it can keep the books balanced with self-generated or other alternative revenues.

“Like development, operations is simple math,” said Roy Priest and Connie Staudinger, ARHA’s CEO and chief operating officer for development, respectively. “There must be enough income to pay the expense and maintain the property, including the planning for capital improvements related to the life expectancy of systems.”

ARHA is selling portions of its most valuable land for market rate development and using the proceeds to redevelop public housing units at average higher rents.

Adkins, located across the street from the Braddock Road Metro station, is ARHA’s most valuable property and a case in point. Adkins currently consists of 90 units on one-and-a-half blocks, with private homes occupying the adjacent half block. Clark Realty (CRC), the selected development company, bought those homes to redevelop the whole two-block site. The new development will include an addition of market rate units and two-thirds the current number of public housing units. Although over 80 percent of Adkins households make less than $40,000 — roughly 35 percent of the area median income (AMI) — only a fraction of the new units will target a corresponding level of rent.

“Our best guess, at this stage in the process, is that the ARHA units will be available to households at some range of 30 [percent] - 60 [percent of] AMI that: (1) results in the highest score for the tax credit funding that we need to build it; and (2) results in the necessary income to sustain the project operations,” said ARHA’s Rose Boyd in a June 22 email.

That is more stratified than ARHA’s previous mixed-income redevelopments at Chatham Square (66 percent market rate, 33 percent low-income) and Quaker Hill (73 percent market rate and 27 percent low-income). It is also more stratified than all 10 comparative nationwide examples of mixed-income redevelopments cited in the city’s Braddock East Plan: None have a smaller proportion of public housing, and all include a middle affordable tier (13-63 percent) in addition to an upper market rate tier (6-52 percent).

“I was definitely looking to see much more come out of this development, especially for such a high number of market rate units,” said Councilman John T. Chapman at the work session. “What we’re hearing today is a far cry from what we’ve laid out strategically.”

CRC and the city differ in their interpretation of the city’s “bonus density” provision. By this provision, the city would allow CRC to build larger buildings than what zoning would otherwise allow, in exchange for a proportion of the extra units having contractually capped affordable rents. Jonathan Rak, CRC’s land use attorney, said that “the units that would justify or support the [bonus] density under the zoning ordinance would be the ARHA units.” Chapman called this a “misuse of the bonus density provision,” saying “the bonus density is supposed to be on top of” the number of ARHA replacement units. Chapman’s interpretation would allow the possibility that workforce-priced units could be interspersed throughout the CRC-owned market rate buildings.

But “the jury is still out” as to whether or not the project will include any workforce units, said Priest in an interview July 10.

Staudinger said it “depends on what [CRC’s] development pro forma looks like: how much money they have to borrow, and what rents they need to pay back that money they borrow …” ARHA is not yet privy to those figures. In construction “there’s not an ‘affordable brick’ and a ‘market rate brick.’ Pro formas have to work, numbers have to work,” she said.

That sums up ARHA’s overall stance: everything ultimately comes down to economics.

The city’s 2008 Braddock East Plan aims to “sustain a critical mass of public housing residents in order to maintain the strong social and support networks that are essential in low-income communities.” But “the only basis for the critical mass is the sustainability of operations,” said Priest and Staudinger.

The Braddock East Plan also says that “a range of housing options, including workforce and affordable housing” adds to “the diversity of the neighborhood” and serves “to ‘bridge’ the social and economic gap between the market-rate and public housing residents.”

But to rebuild any more than 60 ARHA-owned units on-site would require a taller building, which in turn would trigger the requirement for higher contractor wage rates, said Priest. He says ARHA can use the savings, and the extra land value resulting from more market rate units in lieu of workforce units, to build or buy as many or more units less expensively elsewhere in the city.

ARHA’s intention with the Adkins redevelopment “was always, at the end of the day, to create net new units for our portfolio, not to just put back one for one” said Staudinger.

“Candidly, anything’s possible. … These are the parameters that we were operating under as to what was in the best interest of getting the right amount of proceeds to ARHA,” said Nolan at the council work session. Requirements for more on-site subsidized or affordable units may be possible, but would reduce the land value and ARHA’s take, said Rak.

A certain contingent of nearby residents feel that no more than 60 public housing units should return, said Staudinger. Others, including nonprofit and religious activists, want all 90 to return, in addition to other considerations. (See letter on page15.)

Priest acknowledges the difficulties public housing residents face due to relocation. He says that if ARHA were flush with cash, it would rebuild all units on-site, not least because it’s difficult to acquire new properties within city limits. In any case, he thinks ARHA is the only bulwark against the total gentrification of Old Town.

“What we do is so important, because what we own and hold on to is the only assurance that … [the neighborhood will] always have some diversity of income,” he said.