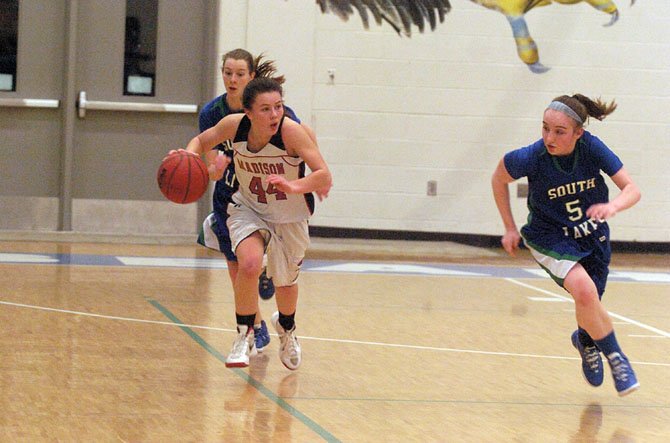 Megan LeDuc of Madison High races up the court with the ball as South Lakes’ Caitlin Jensen defends. LeDuc, a junior guard, was named to the All-Tournament Team following the Warhawks’ finals victory. Photo by Craig Sterbutzel.

The James Madison High girls’ basketball team played one of its best games of the season in last Friday night’s Liberty District tournament finals versus South Lakes. The defending district champion Warhawks were clicking in all areas of the game and kept a talented Seahawks’ squad at bay in a 78-47 victory. The postseason title game took place at South Lakes’ spacious Wendell G. Byrd Gymnasium in Reston.

Madison (21-4), the tournament’s No. 1 seed, has now won the district tournament championship several years in a row under head coach Kirsten Stone, formerly known as Kirsten Roberts. The Warhawks reached Friday’s finals with tournament victories earlier in the week over No. 8-seed Thomas Jefferson High, 75-26, and No. 5 Fairfax, 57-39, in the semifinals. The finals win was Madison’s ninth straight victory going back to late January. The Warhawks have gone a phenomenal 17-0 against district opponents this season.

South Lakes (16-8 overall, 9-5 district), the tournament’s No. 3 seed, reached Friday’s finals with tournament wins over No. 6 Langley, 55-42, and No. 7 Marshall, 61-43. The Seahawks, under veteran head coach Christy Winters Scott, have enjoyed a winning winter season in which the team, down the season’s down-stretch and into the tournament, had won seven of nine games going into the title meeting with Madison.

Madison, in the championship game win over South Lakes, received an absolutely outstanding game from 6-foot-2 inch freshmen center Kelly Koshuta, who finished with 32 points. The Warhawks’ star pivot scored many of her points from close-range positioning as a result of her ability to maneuver her way towards the bucket on drives or post-up moves. Her teammates did a fantastic job throughout the evening working the ball around and finding their front court teammate at opportune times. South Lakes tried to slow the ninth grader down but could not. Koshuta, a First Team All-Liberty District selection, evoked perhaps the loudest cheer of the night from the Madison fandom on hand when, midway through the final quarter, upon receiving a pass out on the left wing area of the court, she, without barely any hesitation, took a long range three-point shot which found its destination. With most of Koshuta’s points coming closer to the basket throughout the game, Madison fans, team members and coaches alike got a kick out of the long range trey which built the Madison lead to 30 points.

So between Madison’s balanced attack which included points inside the paint and torrid outside shooting, the Warhawks were close to being unstoppable on this night.

BUT SOUTH LAKES played hard the entire night, despite falling behind early in the opening minutes and being down 24-11 after one quarter. The Seahawks came to life in the second quarter with a 7-0 scoring spell to begin the stanza. The final points of the mini-run came on a three-pointer from the top of the key from sophomore guard Caitlin Jensen (8 points) to pull the Seahawks within 24-18 just a few minutes into the second quarter. But over the final five-plus minutes of the first half, Madison went on a 10-0 scoring spree to take a 34-18 lead into the intermission. The Warhawks’ game-defining sequence began with consecutive three-pointers from Henshaw, a huge answer to South Lakes’ seven points to start the second quarter.

Madison maintained control of the game throughout the second half on way to the championship.

Strong championship games for South Lakes came from junior point guard Gabrielle Schultz, who led the Seahawks with 12 points and six rebounds in the loss, and sophomore guard Sasha Sprei, who scored eight points off the bench.

Both Madison and South Lakes were scheduled to host first round games, on Monday, Feb. 20, of this week’s 16-team Northern Region Tournament - South Lakes versus Annandale, and Madison versus Lake Braddock.