Korean heritage helpful in his job. 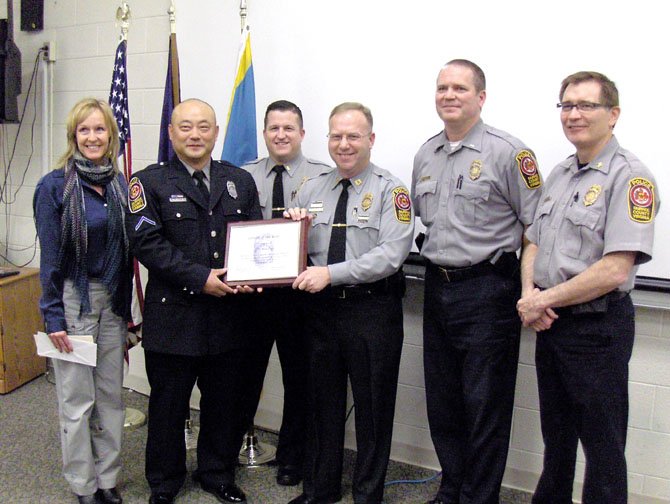 There were smiles all around when PFC Roy Choe was honored Tuesday night as the Sully District Police Station’s 2011 Officer of the Year. He was selected by the station’s Citizens Advisory Committee (CAC) and feted in front of his family and colleagues. 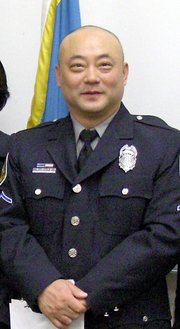 “This is a great night, especially for Roy,” said Second Lt. Ryan Morgan who wrote the letter nominating Choe. “I supervised him, the past year, and he can be best described by his selflessness and devotion to duty.”

Capt. Gun Lee, commander of the Mason District Station, said he echoes those sentiments. “I’ve worked with Roy, and he’s someone who’s competent, gives 110 percent and is always ready to help someone else.” Addressing Choe directly, Lee said, “It’s a tough job, and I thank you for your sacrifices and help.”

Morgan nominated Choe on behalf of the Evening B-Team. He said in his letter that, during the past year, “The Korean-American community, Fairfax County Police Department and other agencies have all expressed gratitude and appreciation for Choe’s selflessness, cooperation and high level of sustained professionalism.”

Choe played a vital role in several investigations and criminal prosecutions on local, state and federal levels. And he carried out many of these assignments voluntarily, without compensation. “Choe’s strong commitment to duty and integrity has enabled the Department to better facilitate outreach in the Korean-American community,” wrote Morgan. “[He’s] developed and fostered many partnerships within the Sully District and has proven an ally to the growing, diverse population of Fairfax County.”

According to 2010 census data, almost 10 percent of Fairfax County’s 189,661 Asian residents live in Centreville. Yet just a handful of police officers countywide speak Korean fluently and understand Korean culture. At the Sully District Station, Choe’s the only one.

Not surprisingly, he joined the language support team, rotating with other members to help provide language support for critical cases. As his expertise became more well-known, other departments also sought his help.

“Roy has been gracious, [agreeing to aid other entities],” said Morgan. “I don’t think ‘no’ is in his vocabulary.” Among the cases Choe assisted in were the following:

Five female employees working there were found to be unauthorized to work in the U.S. and in violation of the Immigration and Nationality Act. The investigation resulted in six criminal convictions, eight administrative arrests, seizure of $104,000 in jewelry, and a $2 million forfeiture judgment against the drinking establishment’s co-owners.

In one instance, he was asked on short notice to review 400 pages of documents from five hours of audio tape for an upcoming court hearing. He did not complain and pitched in to help, and the suspect was eventually found guilty and sentenced to life in prison.

Choe has aided, as well, in general outreach to the local, Korean-American community, helping police and Koreans understand the differences between the Korean and American cultures. Some examples follow:

The Korean Central Presbyterian Church (KCPC) in Centreville has some 4,600 members, and Choe formed relationships with the church leaders and provided speeches to the congregation. “Most of the members weren’t familiar with American policing and expectations during encounters,” wrote Morgan. “But through regular contact, Choe helped ease tensions and began building trust.” Now, church leaders are comfortable contacting Sully police for help, when needed.

Another large, local, Korean-American church is St. Paul Chung Catholic Church in Chantilly, and Choe addressed its congregation several times on traffic-safety laws and crime trends. Because of all this positive outreach to Korean-Americans, Choe was then requested by the police attaché of the Korean Embassy and the Korean Consul General. Concerned about crime in the Korean-American community, these entities hope to establish a network of Korean-American officers in the area to provide information on issues affecting that community.

“Choe also joined the Northern Virginia Human Trafficking Task Force and has participated in multiple operations since the team’s inception,” wrote Morgan. “A portion of the duties are to inspect county massage parlors and determine through interviews if people are being trafficked through the establishments.”

In addition, Choe was nominated for a Meritorious Action Award based on his exemplary performance at the Woodburn Mental Health facility. While there on police business in December 2011, he stopped a disturbed man from cutting himself with a pocket knife, disarmed him and called for medical and police help.

Calling Choe’s service to the Police Department and other agencies “invaluable,” Morgan wrote, “I have received nothing but praise from those he assisted. The partnership Choe has formed within the Korean-American community is a credit to his dedication and the Department’s mission.”