Master Plan will serve to update plan created in 1975. 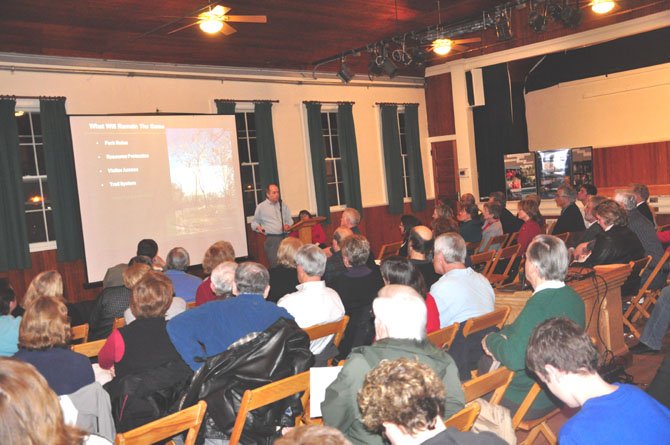 Great Falls — The Fairfax County Park Authority kicked off the master planning process for Riverbend Park during a public meeting Tuesday, Feb. 21 at the Grange. The 411-acre park, which includes more than two miles of land along the Potomac River, has been guided by a master plan that was created in 1975.

The park is classified by the Park Authority as a resource-based park, where the majority of the park exists to protect natural or historic resources. Almost 95 percent of the park is resource protected.

Riverbend recorded more than 320,000 visitors last year who entered by car, those who walk or hike in from other trails aren’t recorded. It also hosted 544 programs and 31 camps last year.

While the process will examine what features visitors would like to see in the future, Andy Galusha, a planner with the Park Authority’s Park Planning Branch said there are many things that will remain the same for the park.

"What won’t change is: park rules, as well as resource protection, visitor access, the trail system, waterfront activities, the visitor and nature education centers, classes programs and events," he said.

Serena Wilson of the Friends of Riverbend Park said the challenge with the master planning process will be ways to fund the park.

"The Park Authority is running this park with the handicap of only 75 percent of their budget, with another five percent on the line with this budget. The struggle is, where do we come up with the money?" she said. "We’re trying to create a box of tools for a future park manager to turn to when they don’t have the money to fund the park."

MOST ATTENDEES to the public meeting said they did not want to see any sort of commercial encroachment into the park, such as the Go Ape ropes course that was proposed last year.

Jim Lynch of Great Falls hikes in park a few days a week, and says he would like to see as little change to the park’s current layout as possible.

"Every time I use the park, I’m grateful for the genius who put those parcels together," he said. "It’s a place of unspeakable beauty and should be preserved the way it is managed properly, which is to say, as a nature, wildlife and cultural preserve and very low impact recreational uses, such as walking and nature activities."

Tom Helger, a resident of Great Falls for more than 30 years, said he is concerned about an uptick in traffic around the park.

"Our roads cannot take much more traffic. Jeffery Road, Beach Mill Road are maxed out as it is," said Helger, who is a transportation safety engineer by trade. "Anything commercial that would add more traffic would just create a dangerous situation."

Jeffrey Lindsay of Great Falls said he and his wife had visited a Go Ape park in England, and would not like to see those results repeated at Riverbend.

"This is a highly inappropriate thing to do to any park, but particularly to Riverbend given its unique river frontage," he said. "We were out in the park yesterday and saw a bald eagle, the first one we’ve ever seen. It’s clear that the park is evolving and developing naturally and any kind of commercial inroads into that would be highly inappropriate."

John Backus has lived within walking distance of the park for 18 years, and estimated he’s run almost 1,000 miles through the park when he trains for marathons.

"To me it is an absolute must that Riverbend remain a resource-based park, no ifs ands or buts," he said. "It needs to be about wildlife trails, peace and serenity. I’d like to see more school programs there and more use of the Nature Center. It’s underutilized, and can and should be used more by the community."

Kevin Fay, Dranesville representative on the Park Authority Board, said Riverbend is a "jewel of the park system," and that he was looking forward to hearing the community’s input on its future.

"This is about getting input and ideas over a several month process and coming back with recommendations and discussion," he said.

More information on the Riverbend Park master planning process can be found at www.fairfaxcounty.gov/parks/plandev/riverbend.htm.