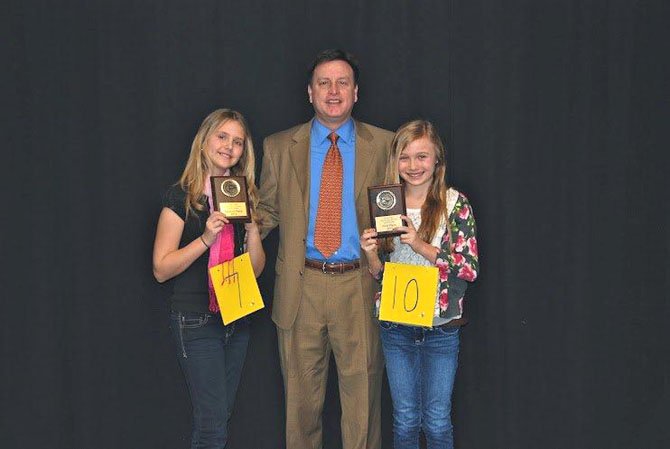 By By Lee Ann Brownlee

There were words such as ascertain, epithet, and rhomboid but a group of fourth through sixth graders took it all in stride and kept the competition lively during the Great Falls Elementary School Spelling Bee on Wednesday, Feb. 15. In what turned out to be one of the longest-running school spelling bees in several years, Sophia Divone, a sixth grader, spelled the championship word of "perquisite" for the win. Katherine Mansourova, also a sixth grader, took second place after several competitive rounds for the championship.

Great Fall Elementary School Principal Ernest Leighty said, "It was great to see the students getting excited during the bee." But what impressed Leighty the most was the ending. "I was most impressed to see how encouraging the two final participants were to each other in the final rounds. They kept applauding each other and that is the kind of supportive spirit we like to see in these types of competitions."

Divone will represent Great Falls Elementary in the Fairfax County Regional Bee slated for Sunday, March 18 at Hayfield Secondary School. Ultimately, the winning participants will have the opportunity to compete in the Scripps National Spelling Bee during Bee Week 2012, May 27 - June 1.