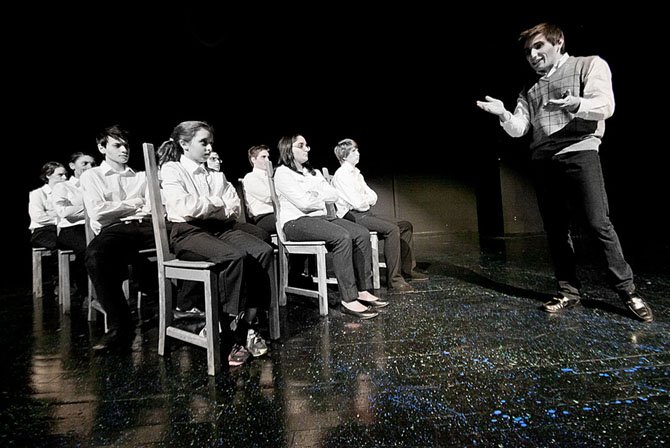 By By Dan Barr/Robinson Secondary School

As technology advances, great leaps forward are made. But for every great leap forward, there are consequences. The growth of technology has led to fewer jobs for people as these workers are replaced with more efficient machines. This is the set-up of Elmer Rice’s "The Adding Machine," which the New School Theater Department of Northern Virginia performed on Feb. 17.

This ahead-of-its-time piece was written in 1923 and is considered a cornerstone for Canadian Expressionism. It was a huge influence for Tennessee Williams while working on Stairs to the Roof. Later, it was produced as a movie, then as a play of puppets, and finally a musical in 2007.

The story revolves around Mr. Zero who works as an accountant for a company for 25 years, dealing with his nagging wife and bitter co-worker. When he finds out he is being fired and replaced by a machine, he snaps and kills his boss. He admits to being guilty, but tries to justify his act to the jury. Regardless, they have him killed. The story follows Mr. Zero into the Elysian Fields where he realizes change is not what he really wants. He goes on to operate an adding machine until Lt. Charles, the head of the Fields, tells him that he is a waste of space and he is to be sent back down to Earth as a recycled soul. Mr. Zero is reluctant at first, but ends up going submissively as he follows a possible made up girl, Hope.

An ensemble cast made up this show, giving it a strong dynamic. Each member of the cast brought a different aspect to the show and they played off of each other well overall. Mr. Zero was played by six different actors or actresses (Sam Stone, Michael Ginsberg, Jonathan Halverson, Brian Kraemer, Maren Berg, and Beverly Kamin). It was a joy to witness the diverse aspects each Zero brought to the character. For example, Kraemer brought a great passion during the court room scene to the otherwise monotonously written character. Along with that, Berg did a strong job portraying the confusion that Zero experiences while in the graveyard. Along with Mr. Zero, Mrs. Zero (Shannon Laws) made good character choices and was impressive in her commitment to the lines. Daisy (Shannon Mendonca) pulled the story along with grace, depicting the bored co-worker and the enamored lover believably. There were a few moments in the show that seemed forced, but overall the acting was solid and the cast should feel proud of their work.

The technical aspects deserve mention as well. The set was abstract and practical, consisting of 12 gray chairs. It worked well with the lighting, which was crisp and direct with no soft spots, which worked for the show but sometimes lost the face of the actors. The music played during scene changes kept the pace up and gave an edge to the show. Similarly, the edgy make up and monotone cookie-cutter costumes created an intriguing visual related to the theme of the piece. The crew did a commendable job incorporating the theme of the show into their designs.

Overall, the company played with the dark themes of the show well. They created an interesting piece that was both mentally and visually stimulating, all the while keeping the pace up and the movement meaningful.