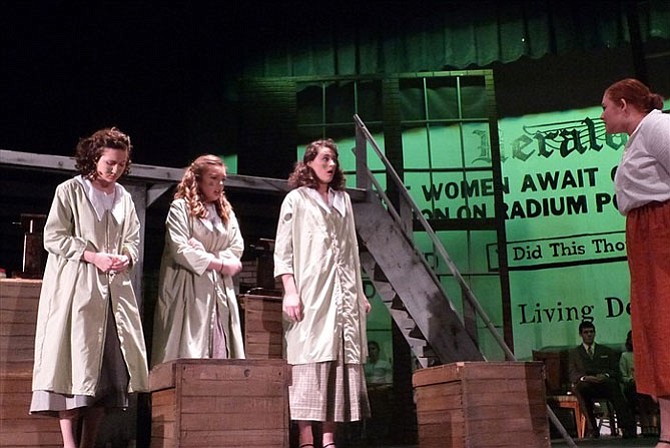 Eerily stoic faces emerge from the darkness, hauntingly illuminated by a sickening green glow. Ghostly, detached eyes stare blankly ahead, sitting passively in front of a backdrop of shocking news headlines, outlining the sensationalized scandal of the decade. Thus begins Chantilly High School's production of “Radium Girls.” In a simultaneously heart-wrenching and captivating performance, Chantilly High School unravels the enthralling tale of Grace Fryer, victim of radiation poisoning at the hands of the U.S. Radium Corporation. Detailing a resilient fight for justice, the U.S. Radium Corporation's attempt to suppress evidence, and the American public's demand for answers, “Radium Girls” by D.W. Gregory is an engrossing play based on a true story of morality and guilt.

Set in the 1920s, “Radium Girls” premiered in 2000 at the Playwrights Theatre. Gregory was inspired by the story of factory workers in New Jersey who sued the U.S. Radium Corporation after discovering that the paint they used to supply the military with glow in the dark watches was essentially toxic. Already exposed to the radiation poisoning, these workers developed anemia, necrosis, and bone fractures. Following the corporation's attempt to bury evidence, the factory workers took to the media, in what would become an iconic turning point for the worker's rights movement in America.

The role of the protagonist Grace Fryer was played by Mia Rickenbach. Filling an incredibly emotionally-demanding role, Rickenbach showed excellent character development throughout the show. In the climax of the play, Rickenbach delivered a haunting monologue, that would surely be remembered by all present due to the piercing quality of Rickenbach's quiet intensity.

Opposite of Rickenbach was the perceived antagonist of the play, Mr. Roeder (Ryan Rickard). Rickard's ability to highlight the humanity in his character certainly paid off and his expertise in capturing Roeder's struggle with his own morality showed theatrical maturity well beyond Rickard's years. In contrast, Diego Encarnacion's portrayal of Mr. Markley as a cold and calculating villain was also chilling. Encarnacion's body language and small mannerisms helped immensely in establishing his commanding presence on stage. From the way he buttoned his suit jacket, to the way he pulled down his cuffs, Encarnacion seemed to radiate confidence and dominate every scene that he appeared in.

Chantilly High School's greatest achievement was their ability to capture the overall atmosphere and mood of “Radium Girls.” From the intriguing headlines painted onto the wall, to the distressed paint on the set, the audience was immediately able to recognize the toxic nature of the environment. Furthermore, the ingenious use of crates instead of furniture provided a minimalistic feel to the show, a choice that worked well with the plot. Perhaps the most noticeable aspect of the stage was the array of cast members sitting on stage. Rather than waiting backstage when not involved in a scene, the actors sat around the stage and simply watched the action that ensued. This choice, along with the dissociated expressions on the actor's faces made for an unsettling but ultimately thrilling effect.

Overall, Chantilly High School proved able to comprehend the spirit of the play and translate that onto the stage. No weak link could be spotted, as each actor was equally committed to his role and the illuminating stage presence of the ensemble was an essential aspect of the play. Tackling mature themes, such as the poisonous effects of sickness and poverty on relationships, Chantilly High School put on a truly gripping performance, leaving the audience riveted.