‘A Christmas Carol’ at MVHS
Votes

‘A Christmas Carol’ at MVHS 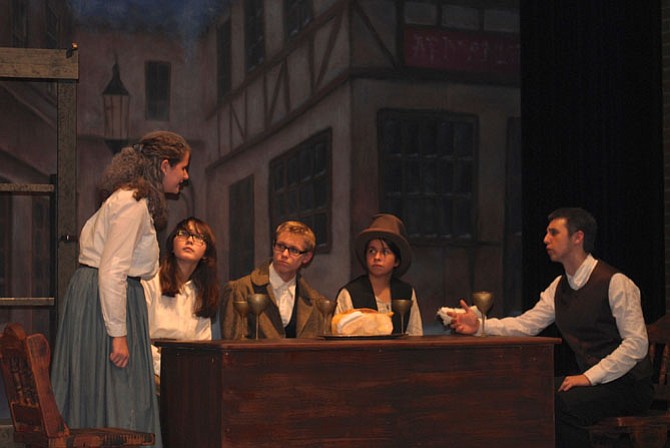 As the holiday spirit begins to fill the air and everyone's hearts, Mount Vernon High School spread it to their stage in their classic rendition of “A Christmas Carol.”

“A Christmas Carol,” by Charles Dickens, is a traditional novella published in 1843. Instantly after being published, this book received both love and criticism. Nonetheless, this story is still very popular and for that reason it has never been out of print. Many variations have been made of this tale in the form of plays, movies, operas, and other media. The storyline follows old, irascible Ebenezer Scrooge as visits from a myriad of ghosts give him the chance to go back through his bittersweet past, examine his dreary present, and look to his forlorn future.

From the start of the show, the audience was enveloped in the production due to the inventive use of the aisles. Throughout the play, a multitude of characters manipulated the aisles to become streets on their walk home or to simply further the storyline in the case of the narrator. This aspect kept the audience enthralled in the production and added to the rigor of the actors' parts.

Being the leading man of his dismal life, Ebenezer Scrooge had an extensive amount of stage time and a generous number of lines. Samuel Zarek, playing the cantankerous old man, tackled this arduous challenge wonderfully. Throughout the entire show, he never so much as stumbled upon the slightly abstruse, venerable language, nor did he forget a single word. Moreover, he managed to sustain remarkable diction and excellent volume all through the production.

Another impressive factor of this show was that the students utilized their stage time, no matter how limited, to its upmost potential. A great example of this was the Fezziwigs. These two employed the entirety of the stage with their enormous physical comedy and vivacious character choices. Mr. and Mrs. Fezziwig, played by Ttendo Williams and Sydney Osei Tutu, brought laughter into the throats of the audience and smiles onto their faces, providing this slightly bleak tale with well-needed buoyancy.

Technically, this show was also intriguing. Although minimal, the set fit the show very well and allowed the actors to manipulate it in whatever way they wanted. The set also allowed for the duality of set pieces, enabling them to have meaning in several locations. Another technical aspect that enhanced this show was the make-up. From the start of the show, this element was tastefully visible, starting with Scrooge's age make-up. Looking onto the stage from a distance and at him in close proximity when he wandered through the aisles, this make-up was impeccably done and really added to Scrooge's character. Furthermore, the make-up of the series of ghosts was also impressive with their unearthly, gorgeous highlights and gloss.

Overall, Mount Vernon High School brought the Christmas spirit to their audience and reminded everyone that life isn't about the quest for money or possessions but about rejoicing in the things they already have.