Cooking with the Golden Girls in Herndon
Votes

Cooking with the Golden Girls in Herndon

Herndon Youth are "Cooking with the Golden Girls" at Sunrise Senior Living Center. 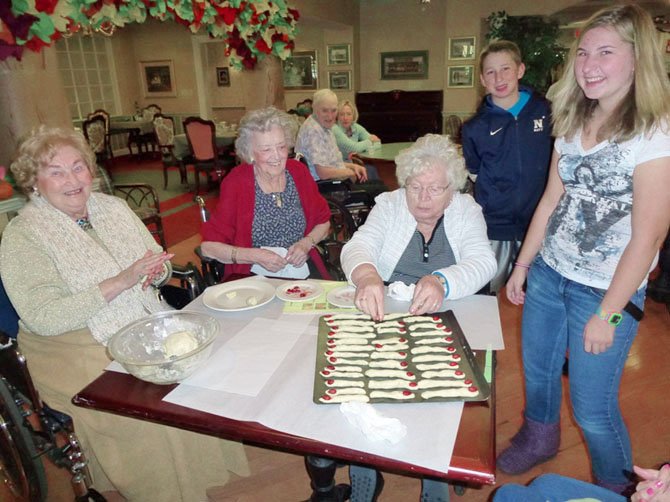 Maryann Rigo and residents at the Sunrise Senior Living are working on scary treats for a resident Halloween extravaganza. Residents Joan Gay, Lucille Kilmain and Fern Lacangelo mix the dough for this "finger" food and assemble them on a cookie sheet for baking. Photo Courtesy of Rigo family

The "Golden Girls" of the Sunrise Senior Living Center in Fair Oaks, are once again enjoying the excitement of Girl Scout visitors. Maryann Rigo, a sophomore at Oakton High School and Herndon resident, could not help but return to the Center for her Girl Scout Gold Project after running the Sewing Center for the residents there in June 2010. The bond that was made with the residents and the desire to do more to bring other youth into the fold drove her to defining a new program.

Maryann envisioned an activity where the youth and seniors could mutually benefit from the special gifts of the seniors and the energy of the youth. What better way to bridge the age gap then through the sharing of favorite recipes and cooking alongside the residents? Working with Lisa McGary, Sunrise Activities and Volunteer Coordinator, they discussed the plan and came up with a cooking program for the Center residents they called "Cooking with the Golden Girls."

THE KICK-OFF OF THIS PROGRAM was held in the Fall of 2011 where seniors and Girl Scouts from Troop 5540 joined together to create an Italian meal. On the menu were meatballs, pasta, sauce, award winning lentil soup and homemade apple pie.

Maryann works with McGary to decide on the theme. They collect recipes and create the menu for the each event. They go shopping together with a well thought out list and determine how many "helpers" they will need. Maryann solicits help from Girl Scouts, classmates and friends from her church. She does not limit it to just girls and has had help from her brother, Louis Rigo, and his buddies. They’ve had fun preparing an Italian menu, Halloween party treats and Super Bowl munchies.

Residents share many of their favorite recipes and actually cook food they have not tasted in decades. One Golden Girl, Marqueritte Zillotti is a 100-year-old resident from New Haven, Conn. and the youngest of a family of eight. She recently cooked with Girl Scouts and Brownies whipping up a New York Style Cheesecake for the Super Bowl Resident’s party on Feb. 5. The girls learned that Marqueritte was born the same year that the Girls Scouts of America organization was founded - March 12, 1912. Marqueritte enjoyed hulling the strawberries for the dessert and shared her stories of being paid "a penny a pint" back when she was a young girl.

Even though the Girl Scout Gold Project has "officially" ended, Maryann has vowed to keep the program going at Sunrise Senior Living until she attends college. She then plans to mentor a replacement for the program for as long as they want to keep it running. McGary remarked on how valuable the stimulation is for the Sunrise Senior Living Community not just during the cooking but for days after as they discuss the fun they had and plan for the next cooking session.

Maryann is planning to offer her well received "Cooking with the Golden Girls" Program Guide to other area Fairfax and Loudoun County Sunrise Senior Living Centers for consideration. She feels that it is a worthwhile program that benefits all involved and provides a way for the youth in the area to give back to their community while benefiting greatly from the interaction and experience of working with the seniors.

THE NEXT COOKING EVENT is planned for Sunday, March 18 where the group will be making some seasonal favorites. If you are interested in helping out please contact Maryann Rigo at mkrigo3@gmail.com.