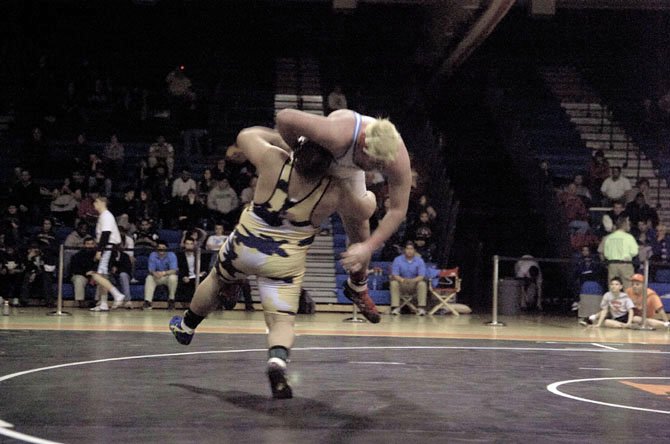 A lighter, quicker Pinkston pinned Marshall’s Matt Crawford in the first round of the 285-pound final during the region wrestling championships on Feb. 11 at Hayfield Secondary School, helping the Rams to a runner-up finish. Pinkston, a 5-foot-8 sophomore, said he dropped from 254 pounds to 244 prior to regionals --- a move which paid dividends. He was recognized for recording three pins in 5 minutes, 21 seconds during his four-match ride to the championship.

"Last week [at districts], I just wanted to get through it. This week, I wanted to prove a point that I’m the best heavyweight in Virginia."

"I meant to be more aggressive and not as passive," said Pinkston, a state runner-up last year. "Last week [at districts], I just wanted to get through it. This week, I wanted to prove a point that I’m the best heavyweight in Virginia."

Pinkston said experiencing regionals as a freshman helped him this year.

"It kind of helped me with my approach because last year I was like, ‘Wow, what is this tournament? I’ve never been here before,’" he said. "Now it’s kind of like, ‘OK, I’ve got to win [the] first two [matches on the] first day [and the] second two [on the] second day to be on top."

Teammate Brooks Martino won the 145-pound title, earning a 16-3 major decision against Lake Braddock’s Rory Renzi for his third region championship. Martino, a 2011 state champion, was named the most outstanding wrestler for the 2012 regional meet.

"You kind of know what to expect," he said. "You expect a bigger crowd than district or other tournaments you’ve been to. You’re going to know there’s tough competition that you’ve been training for."

The state championship will be held Friday and Saturday, Feb. 17-18 at Robinson Secondary School.