Great Falls Looks Ahead to 2012
Votes

Great Falls Looks Ahead to 2012

Great Falls Looks Ahead to 2012 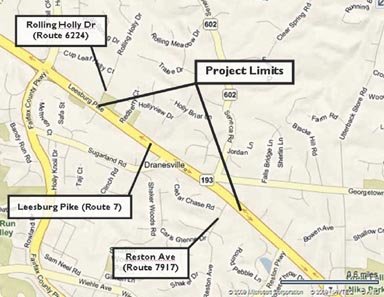 The Virginia Department of Transportation will begin relocating utilities between Reston Avenue and Rolling Holly Drive in the spring as part of the Route 7 widening.

Great Falls — Last year saw progress on several issues around Great Falls, issues that will affect residents for generations to come. The process of widening Leesburg Pike from Reston Avenue to Rolling Holly Drive is currently in the design phase.

The widening is part of the overall widening of the road from Tysons Corner, but since the section between Reston Avenue and Rolling Holly Drive will impact the Leesburg Pike- Georgetown Pike intersection, the Great Falls community has been especially involved in the process.

According to the Virginia Department of Transportation, utility relocations including a 24-inch gas line, 12-inch water line, fiber optic, telephone and electric lines, will begin in the spring.

Major progress was made last year in changing VDOT’s original plan for the intersection of Leesburg Pike and Georgetown Pike, which called for many features, including a dual-left turn lane onto Georgetown Pike, that had the community concerned.

Elected officials such as Del. Barbara Comstock (R-34) and Supervisor John Foust (D-Dranesville) worked with groups such as the McLean and Great Falls Citizens Associations to find a more acceptable solution.

AS THE PROJECT MOVES FORWARD, Foust says he plans to spend this year pursuing funding for the entire project.

"The Route 7 widening project is something I personally had added to the comprehensive plan for Tysons Corner," he said. "Tysons will never work if the four lanes inside go to two lanes outside."

According to VDOT, Leesburg Pike carried 65,000 vehicles per day between Reston Avenue and Rolling Holly Drive, and they estimate that number will be at 103,000 per day by 2032.

Newly elected State Sen. Barbara Favola (D-31) says she will be looking very closely at getting funding for the project as well, and that she will also pay close attention to any future VDOT proposals regarding Georgetown Pike.

The Great Falls Citizens Association is busy looking at the future of the rest of the community as well. They are currently in the process of drafting a Long Range Plan, which they hope to present to Fairfax County in 2013 when the county updates its own comprehensive plan.

Long Range Planning Committee co-chair Doug Cobb says that over the next few months they hope to collect ideas from people around the community about what they would like to see in the future.

At a November meeting, one possibility was presented for the future of the intersection of Walker Road and Georgetown Pike, which would re-align the road. Future meetings scheduled over the coming months will examine more community input, as well as possibilities for future traffic studies along Georgetown Pike, a performing arts center in Great Falls and a community center.

"Nothing has been voted on or decided by the GFCA, these are all just possibilities," said Jackie Taylor, president of the GFCA.

The Great Falls Fire Station, which was rebuilt last year, will hold a ribbon cutting ceremony in March. The new station gives the firefighters more room to hold their specialized rescue equipment.

ONE THING that has been set in stone in Great Falls is the new fire station, which was constructed over the course of 2011 and went into operation a few weeks ago.

"Career firefighters spend two-thirds of their lives at their fire station, and we wanted to make sure they had a decent place," said Homer Johns, past president of the Great Falls Volunteer Fire Department.

The station will officially open with a ribbon-cutting ceremony Saturday, March 10 at 11 a.m.