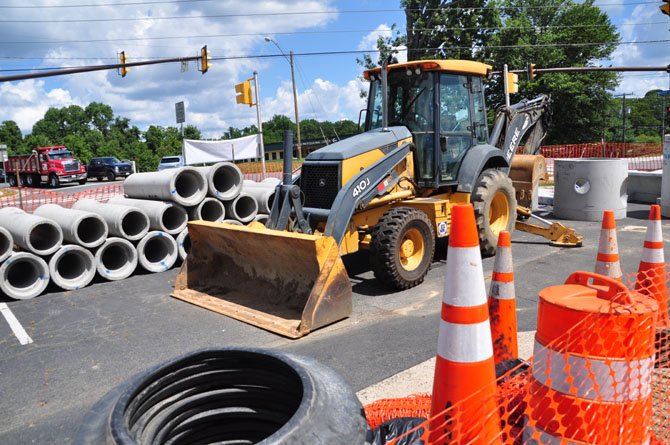 Construction equipment is at the ready to begin the Walker Road “diet” plan, which will make the road easier to navigate for drivers and safer for pedestrians. Photo by Alex McVeigh.

Great Falls — Residents of Great Falls will be seeing plenty of orange traffic cones over the coming months, and even years when it comes to the Route 7 widening project.

The Virginia Department of Transportation’s plan for the widening of a one-mile stretch of Route 7 from Rolling Holly Drive to Reston Avenue.

The $37 million project commenced in May, and will widen Route 7 east of Rolling Holly Drive to Reston Avenue, a stretch of approximately one mile. It is part of an overall plan to widen Route 7 from Tysons Corner to the Loudoun County border. Improvements will include: a new traffic signal at Redberry Court, relocation of the entrance to Woody’s Golf, retaining walls added on Leesburg Pike on each side of Sugarland Road, a 10-foot wide shared use path, intersection improvements at Georgetown Pike, Seneca Drive and Leesburg Pike and the addition of more than 25,000 trees, shrubs and other plantings.

During the first phase of the project, which will run through the end of 2013, temporary pavement will be constructed along eastbound Route 7, and traffic will use that pavement for a time while the widening occurs. The existing median at Georgetown Pike will be removed, and there will also be temporary pavement placed there.

Phase Two will run from late 2013 to fall 2014, and will include the addition of temporary traffic signals at Redberry Court and Georgetown Pike, temporary pavement along westbound Georgetown Pike and the construction of the retaining walls.

Phase Three will be from fall 2014 to summer 2015, and move westbound traffic into the new lanes, implement a detour on Sugarland Road, and see construction of new medians at the Georgetown Pike-Seneca Road intersection.

Phase Five will see a full shift to the completed lanes, median and lane widening and the addition of landscaping.

According to VDOT, construction is expected to finish by December 2015.

CLOSER TO THE CENTER of Great Falls, the section of Walker Road south of Georgetown Pike is scheduled to undergo a “diet” plan to make it easier to navigate for drivers and pedestrians.

A crosswalk will be added to Walker Road between the Safeway shopping center and the Wells Fargo, part of the Walker Road “diet” project, that is expected to begin any day.

Currently there are stretches that are up to three lanes wide in one direction, but with no markings. The diet plan will slim the road down, adding five bumpouts on the west side and three on the eastside. The bumpouts will narrow the road to three lanes, one in each direction, and one two-way turn lane in the center.

“During the process, there will be driveways to the shopping centers closed, but only one at a time, so the other can be used,” sad Eric Knudsen, president of the Great Falls Citizens Association. “There will be no construction at night.”

Other improvements that will be built will be a crosswalk that will go from the Wells Fargo Bank to the Safeway center and wider sidewalks.

“It can be a tough stretch for cars and pedestrians, because there’s no markings to tell drivers where to stop to make a left turn,” said Gary Beuler of Great Falls. “We like to come as a family to the events at the Village Centre, which often means parking at the Safeway and crossing Walker, and that’s OK with a police crossing guard, but very dangerous any other time.”

The plan is a result of a traffic calming study conducted in 1999, and the contract was awarded in late spring.

Construction on the “Walker Road Diet” is expected to start any day now, and will conclude sometime in November. Fencing is currently being put up, and pipes and other equipment has been delivered to the site.

Another major transportation project is scheduled to conclude by the end of this month, the replacement of the bridge on Beach Mill Road, which started at the beginning of the summer.

The new bridge replaces a temporary one that was installed after the original was destroyed in Sept. 2011 storms. The replacement was delayed from late 2012 to this summer in order to minimize impact on school buses. 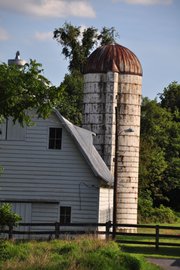 Turner Farm is the site for a proposed community arts center.

According to Supervisor John Foust’s (D-Dranesville) office, substantial completion occurred last week and following clean up of the site, the bridge will officially open Aug. 29, prior to the first day of school, which is Tuesday, Sept. 3.

The addition of a sewer line to serve the Great Falls Village Centre is a project that has been discussed in recent years. The GFCA held exploratory meetings to come up with solutions to the failing septic fields in the area, including a sewer line that would run from an existing sewer line down Walker Road.

“We studied the possibilities and options, but in the end the business owners and other stakeholders just couldn’t come to a consensus when it came to the cost of putting a sewer line in,” Knudsen said.

TURNER FARM IS THE SITE of a proposed community arts center by the Great Falls Foundation for the Arts. Planning for the project began as far back as December 2011, and the foundation kicked off their fundraising in February of this year.

“We’re still in the midst of starting our capital campaign, as well as meeting with the local organizations that would be affected,” said Julie Casso, director of the foundation. “Turner Farm is important to many groups in this community, and our number one goal is to be able to build a center than can co-exist with all of the park’s uses.”

Casso said they have made changes to their original plans after getting feedback from local equestrian groups, who use Turner Farm often. She said they have also received questions about the future of the Turner Farmhouse, which has fallen into a state of disrepair. The foundation will not have anything to do with the house, which will be a Fairfax County Park Authority issue.