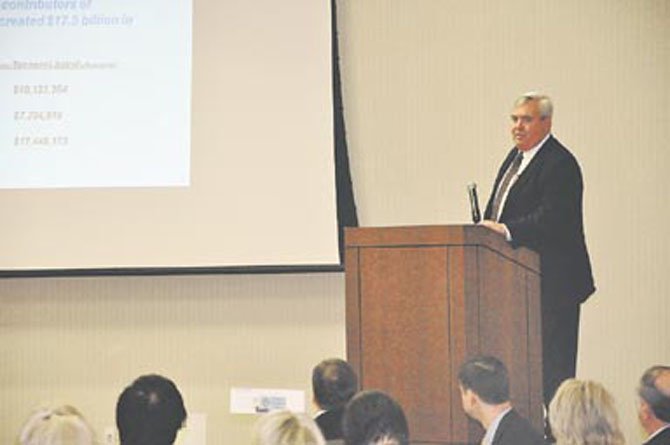 Potter’s main priority was providing an update on the status of Dulles Metrorail.

"The station at Wiehle Avenue is taking shape, the plan right now is that in 2013 we’ll be able to complete Phase One," he said. "We’re about 60 percent finished in terms of construction."

He also said the tunnel through Tysons Corner was complete, and they’re ready to start the next step, which is laying rail through it.

"For Phase Two, we’re in the process of preliminary engineering, which should be done at the end of February, when we‘ll see what construction companies are interested," he said. "After the project is submitted to MWAA for approval, including cost estimates … Loudoun County and Fairfax County will have a 90-day review period, where they will decide to go along with the project or stop the project."

Frances Craig, president and CEO of Unanet Technologies, said she was interested in Potter’s presentation because she believes rail is vital to the area’s future.

"If you go to any major city in the world, Rome, Paris, London, San Francisco, Los Angeles, New York, Boston, you can fly in and take rail to the center of the city," she said. "That’s what I want to happen here, so we’re very supportive."

Potter also provided a brief update on the state of the airports, including an expanded international arrivals section. He said while airplane revenues stayed stable in 2011, airlines are changing the way they do business.

"Airlines have moved from a strategy where they have to be in every market, to where they‘re very much focused on profitability. They‘ve kept a tight cap on passenger growth, and we‘re seeing a downsizing of aircraft," he said. "The bottom line is, while the industry has been stable, it does have its challenges, and it’s meeting those challenges by downsizing and for us that’s problematic. As an airport, we make money when people fly."

"Charles Snelling, MWAA’s chairman, announced the decision by saying ‘Jack is the right person at the right time to meet the challenges of building Metrorail to the Dulles Corridor,’" he said. "Having managed an organization with more than 500,000 employees as Postmaster General, his work to enhance the workplace environment has contributed to record levels of safety and employee satisfaction."

More information on the chamber is available at www.dullesregionalchamber.org.