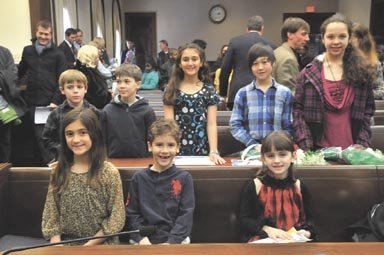 By the time 15-year-old Justin Cox was finished reciting the “I Have A Dream” speech from memory Monday afternoon, Jan. 15, at City Hall, several in the audience were holding back tears. Not only was the performance a flawless rendition of each word in the speech, but Cox’s performance captured the essence of its meaning with a dramatic reading — sometimes straining the microphone system to keep up as he rose to a crescendo toward the conclusion of the speech.

“It’s inspiring,” said Cox after the crowd gave him a prolonged standing ovation.

Although Cox is a student at Crossland High School in Temple Hills, Md., his mother is a teacher at James K. Polk Elementary School here in Alexandria. Ever since Justin was a child, his mother encouraged him to start memorizing the famous speech. She started when he was 3 years old. By the time he was 8, he could recite it from memory. Since that time, he’s been on a tour of sorts interpreting Martin Luther King. It started with a few churches, then school groups. This week, he took the act to Alexandria City Hall to embody the famous civil rights during the annual Martin Luther King Poster Contest.

“He’s got a gift,” said Jeanette Cox, his mother. “We just tapped into it.”

“The march struck me as a giant pep rally and is likely to have a similar value. Opponents of the civil rights legislation won’t change, but the proponents are likely to press their demands with greater enthusiasm.”

WHEN KING ORIGINALLY delivered the speech in August 1963 it was not universally praised. In fact, many were quick to dismiss the March on Washington and the “I Have a Dream Speech.” Two days after the speech, the Alexandria Gazette ran an Associated Press item with the headline “State Congressmen See Few Results From D.C. March.” None of the delegation indicated they would support civil rights legislation that was the aim of the March on Washington.

“So far as the Senate is concerned, I don’t think it changed a single vote,” said Democratic Sen. Absolam Willis Robertson, a member of the conservative coalition. “Of course, I’m so thoroughly convinced of the unconstitutionality and undesirability of the president’s legislative program that I may be an unfair judge. But, certainly, it had no effect on me."

The Associated Press story made it clear that members of the Virginia congressional delegation were solidly against President John Kennedy’s proposed civil-rights legislation — a series of reforms that would later become the basis of the landmark Civil Rights Act of 1964. Democratic Sen. Harry Byrd was not quoted in the story, although the Associated Press noted he had already indicated “he would pay little attention to the day’s events.” U.S. Rep. Howard Smith (D-8), who represented Alexandria in the House of Representatives, said he considered the civil rights legislation supported by the March on Washington to be “unneeded, unnecessary and unconstitutional.”

“The march struck me as a giant pep rally and is likely to have a similar value,” said Democratic Rep. J. Vaughan Gary. “Opponents of the civil rights legislation won’t change, but the proponents are likely to press their demands with greater enthusiasm.”

THE CONGRESSMAN was right. Opponents of civil rights remained solidly against change, sometimes with violent consequences. But supporters were galvanized by the speech, and it has become a hallmark of the civil-rights movement. It’s also to the central theme of the Alexandria Society for the Preservation of Black Heritage’s poster contest, which is held every year at City Hall. This year’s event featured former Gov. George Allen, who is currently running to return to a seat in the U.S. Senate. Before the event began, Allen recalled that the University of Virginia’s football team was integrated when he was a student there.

“To me, it was a perfectly normal thing to have an integrated team,” said Allen, who attended high school in the desegregated schools of California. “It would have been odd to have it any other way.”