Restoration of civil rights on the agenda for next governor. 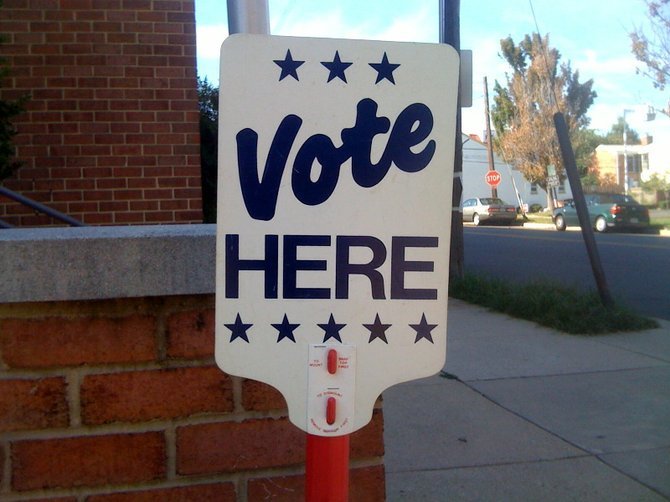 Republican Gov. Bob McDonnell has restored voting rights to more felons than any other governor in the history of Virginia, more than 4,000, so far. And a new online registration form is expected to increase that number more before his term ends in January. Photo by Michael Lee Pope.

These are some of the questions at the heart of an ongoing debate in Virginia about restoration of rights for those who have paid their debt to society. It's also a point of distinction between the candidates for governor because the winner of the election will have the power to determine who gets to have civil liberties restored as well as the process to make it happen.

Republican Attorney General Ken Cuccinelli voted against restoring voting rights when he was in the state Senate, although his views on the issue have been evolving. He now supports an amendment to restore voting rights, although he maintains that the governor does not have the constitutional authority to issue an executive order automatically restoring them. Former Democratic Committee Chairman Terry McAuliffe, on the other hand, says he will issue an executive order the first day of his administration ditching the application process in favor of a new system in which the governor's office would review all nonviolent felons.

Both Cuccinelli and McAuliffe support a constitutional amendment, although that's a nonstarter in the Republican-controlled House of Delegates.

"The stereotypical position on restoration of voting rights for felons is that Democrats would generally be more supportive than Republicans," said Kyle Kondik, analyst with the University of Virginia Center for Politics. "We're not necessarily seeing that in this particular instance because the governor has been for it."

Since he took office in 2010, Republican Gov. Bob McDonnell has defied conventional wisdom on the issue of restoration of voting rights for nonviolent felon. Despite the long history of Republican opposition to the issue, McDonnell has restored voting rights to more felons than any other governor in the history of Virginia — more than 4,000, so far. Last week, he launched a new online application so nonviolent felons could use the Internet to facilitate the process of restoring civil rights. He even raised the issue during his State of the Commonwealth Address earlier this year.

“As a nation that believes in redemption and second chances, we must provide a clear path for willing individuals to be productive members of society once they have served their sentences and paid their fines and restitution,” said McDonnell in the January address to members of the General Assembly. “It is time for Virginia to join most of the other states and make the restoration of civil rights an automatic process for nonviolent offenders.”

WITHIN MINUTES of the governor's speech, civil-rights groups spoke out in support of the governor’s new position. The American Civil Liberties Union of Virginia praised the effort as a way to shed “this vestige of the Jim Crow era.” Virginia Organizing and Virginia New Majority also issued written statements supporting the effort, which now had bipartisan appeal. State Sen. Don McEachin (D-9) called on the governor to name the legislation in honor of the late state Sen. Yvonne Miller (D-5), who was a longtime advocate for restoring civil rights to nonviolent felons.

Then House Republicans pulled the rug out.

A few days after the State of the Commonwealth address, the House Subcommittee on Constitutional Amendments met to consider a constitutional amendment introduced by Del. Charniele Herring (D-46). The amendment would have kept the governor's power to restore civil rights, although it would have added a new power to the General Assembly to "provide for the restoration of civil rights to persons who have been convicted of nonviolent felonies and who have completed service of their sentences, subject to the conditions, requirements, and definitions set forth in that law." But House Republicans broke with the Republican governor, the Republican lieutenant governor and the Republican attorney general.

“A number of Republicans stood up on the floor of the House and essentially attacked the governor for supporting this,” said Del. Rob Krupicka (D-45). “It’s clear they don’t intend to follow his wishes.”

Since the session, momentum has been building to find a way to achieve some kind of action without the need for a constitutional amendment — an initiative that has failed year after year for more than three decades. In March, Attorney General Cuccinelli put tougher an advisory committee to figure out a way to move forward on the issue after decades of deadlock. In May, the advisory group released a report that discussed several alternative approaches, but didn't endorse any one in particular. One approach would designate an existing agency within the executive branch to spearhead a more proactive rights restoration process on behalf of the governor.

"Guided by policies articulated by the Governor, this agency would do what is not practical now: lead a statewide, proactive outreach and educational effort to encourage individuals to apply for a restoration of their civil rights," members of the advisory panel wrote in the May report. "After processing applications received, this agency could formulate recommendations for the Governor who would make the decision on whether to remove political disabilities for each individual applicant."

CUCCINELLI WAS ONE of the strongest opponents to extending voting rights to nonviolent felons during his years in the General Assembly. Year after year, the issue was raised by Northern Virginia Democrats. And year after year, the conservative Republican who represented the 37th Senate District — an area that stretched from Burke to Centreville — would vote against it.

"Being in the middle of it for a number of years changed my opinion on this particular point," said Cuccinelli in a May interview with Connection Newspapers. "I think I'm consistent with some of the other things I've done in the criminal justice arena."

When he arrived in Richmond, Cuccinelli said, he thought denial of voting rights should be part of the punishment given to felons. Over the years though, he saw a pattern of behavior in which legislators would increase penalties for all manner of offenses — a phenomenon he calls "felony creep." By the time he became attorney general in 2010, Cuccinelli began to have second thoughts about his longstanding opposition to restoration of voting rights for nonviolent felons. This year, he appeared before a panel of legislators to testify in favor of an amendment that he voted against as a legislator.

"When I arrived as attorney general, I evolved to a different position," said Cuccinelli. "I think that we need to be more open as a society to reintegrating people who go into our prisons and our jails when they come out."

MCAULIFFE TAKES A traditional Democratic position on extending voting rights, although he says streamlining the process would be one of the first actions he would take as governor. McAuliffe says he would issue an executive order on his first day in office that would do away with the application process altogether in favor of a new system in which the governor's office would review each and every case individually.

"Provided that they have served their time without significant incident and have made all required restitution and paid all fees and fines, their civil rights will be automatically restored to them and they can fully rejoin civil society," McAuliffe said in a written statement on the issue.

McAuliffe also says he would support a constitutional amendment that would automatically restore voting rights for nonviolent felons. This is an approach cheered by civil-rights advocates who fear that future governors might not take the same position as McAuliffe or even Cuccinelli and McDonnell. Considering the Republicans’ historical opposition to extending voting rights, even the best executive order would only be as good as the governor in the Executive Mansion. Ultimately, they say, an amendment is the best way to solve the problem in the long term.

"Until such legislation is passed, under the Virginia Constitution, it’s up to the governor to use his or her constitutional authority to restore civil rights to non-violent felons," McAuliffe wrote. "This is basic fairness. Once someone has paid their debt, they should be free and clear."

SOME OF THE ISSUES remain unresolved. For example, what is "automatic" restoration? The ACLU uses that term to mean no application process is needed and no review of an individual’s background is conducted. McDonnell, on the other hand, uses the term to mean that all applicants who qualify are approved. Another issue that is up for interpretation is who qualifies as a "nonviolent" felon. Civil rights advocates are concerned that that the definition leaves too much room for interpretation.

"The Virginia constitution gives the governor complete discretion," said Hope Amezquita, legislative counsel and staff attorney at the American Civil Liberties Union of Virginia. "If you are a person who has committed a crime that isn't considered nonviolent by the code of Virginia but you are on the governor's violent list, you don't quality and you have to go through the more rigorous process."